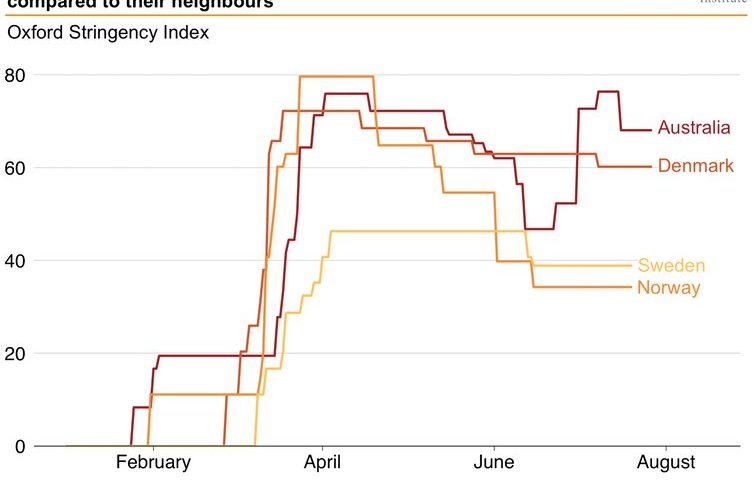 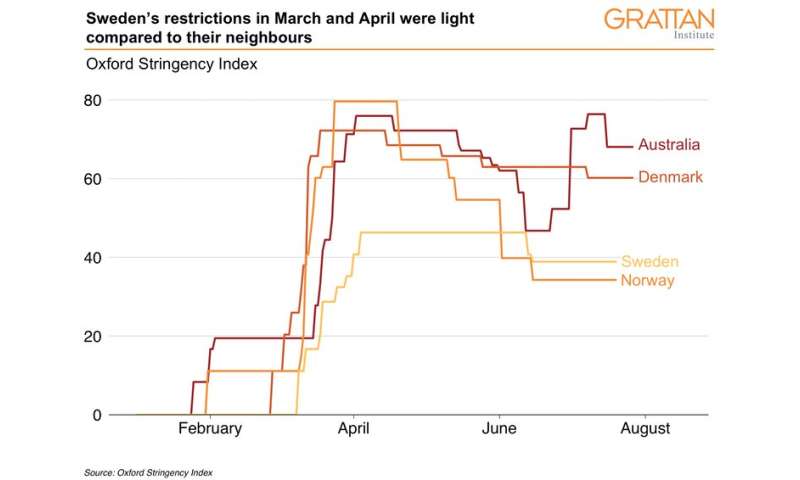 The COVID-19 pandemic has brought once-in-a-generation destruction to the lives and livelihoods of people around the world.

The costs of preventing the spread of COVID-19 must always be compared to the health, social and economic costs of viable alternatives. Countries across the globe have dealt with this balancing act differently.

One country in particular that has attracted attention for its lighter approach to lockdown is Sweden. Some people have regarded Sweden as an example for Australia to follow.

But Sweden shouldn’t be seen as a model for Australia when it comes to COVID-19. The virus has spread rapidly, they’ve had more deaths, and the economy is suffering just as badly as their neighbors with heavier lockdowns.

Sweden’s approach was softer, but it wasn’t unrestricted

While some people called Sweden’s approach a “let it rip” policy, this was never the case. Swedes were not free to go about their lives as normal.

Sweden’s policymakers did introduce restrictions to limit the spread of COVID-19 infection, but they tried to do so in a way that minimized the effects on people and companies.

Bars and restaurants could remain open, but with capacity constraints and a requirement of table service. Schools were kept open to preschool and primary students, but were closed to senior students. Non-essential international arrivals were banned, but only from countries outside Europe.

There were social distancing requirements and protections for vulnerable populations. Visits to aged care facilities were prohibited. People over the age of 70, pregnant women, and those with pre-existing health conditions were encouraged to “avoid social contacts” and to ask others to do shopping and errands for them.

These restrictions and recommendations remain in place. 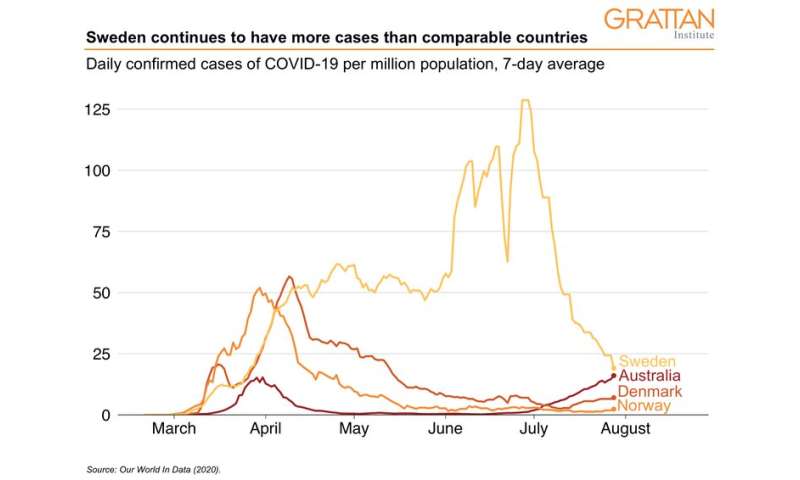 As in Denmark and Norway, the number of new COVID-19 cases rose rapidly in Sweden from the start of March. But Denmark and Norway both implemented tighter restrictions, and their case numbers fell away from April.

Sweden maintained its rate of roughly 600 new cases per day throughout April and May, and then the numbers started to rise again, reaching 1,300 per day at the start of July.

By the end of July, Sweden had the 7th highest per-capita death rate in the world, and about ten times larger than its Nordic neighbors. Outbreaks spread to aged care facilities and the vulnerable.

Sweden has to date had about 80,000 confirmed cases of COVID-19—though this is likely to be an underestimate—and about 5,700 people have died. This would equate to about 15,000 lives lost in Australia.

Even with its lighter lockdowns, Sweden has suffered economic losses almost as severe as its Nordic counterparts.

The Swedish labor market has been hit hard. Unemployment is expected to peak at between 9-11%, cushioned by a fall in labor-force participation as Swedes leave the labor market entirely.

The country’s central bank estimates GDP will fall by 4-6%, depending on a second wave of infections.

In comparison, Australia’s treasury expects the unemployment rate here to peak at 9.25%, and for GDP to fall by 2.5%. 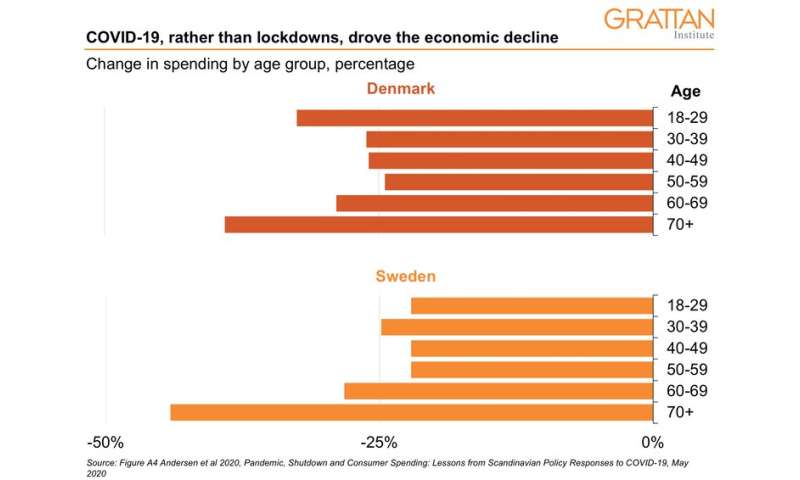 Like in Australia, the Swedish government has provided financial support to businesses to reduce the number of job losses, and given additional support to the “many people” who will lose their jobs.

Economists from the University of Copenhagen have compared Sweden and Denmark. Both countries had similar exposure to COVID-19 at the beginning of the pandemic, and similar economic conditions before the crisis.

The economists examined the spending of 860,000 people in the two countries. They found consumer spending dropped by 29% in Denmark, but it also fell by 25% in Sweden. People in both countries had changed their behavior to reduce their risk of infection, regardless of government-mandated restrictions.

Swedes’ confidence in the ability of their government and health authority to handle the crisis decreased between April and June.

Their neighbors seem to have limited confidence too. Norway, Denmark and Finland have created a “travel bubble”, but Sweden is excluded from it.

While new COVID-19 cases in Sweden have been decreasing from the peak at the beginning of July, they still sit at about 250 per day. Denmark and Norway have been below that level since mid-April.

Swedes have paid a heavy price to get to where they are—and they’re still quite some way from controlling the spread of COVID-19, as their neighbors have done.