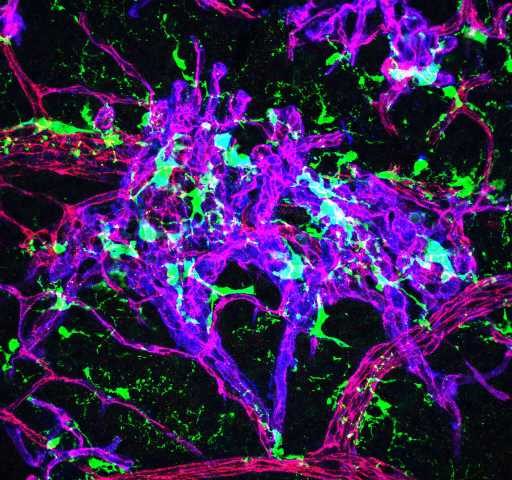 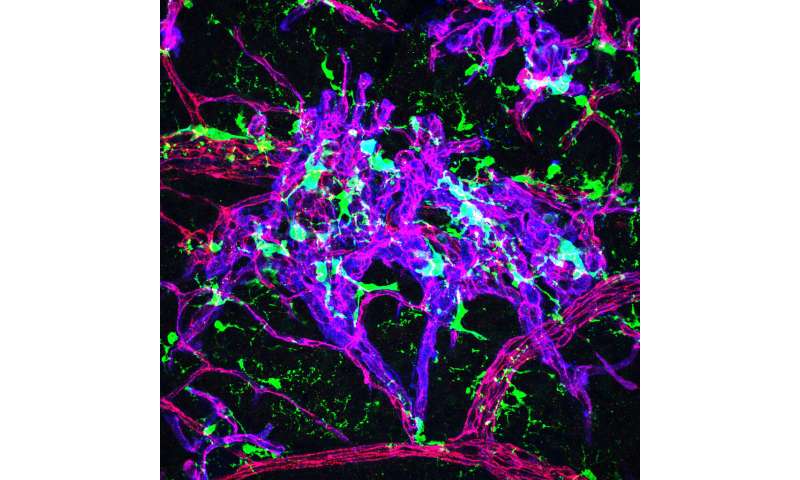 When the eye isn’t getting enough oxygen in the face of common conditions like premature birth or diabetes, it sets in motion a state of frenzied energy production that can ultimately result in blindness, and now scientists have identified new points where they may be able to calm the frenzy and instead enable recovery.

In this high-energy environ, both the endothelial cells that will form new blood vessels in the retina—which could improve oxygen levels—and nearby microglia—a type of macrophage that typically keeps watch over the retina—prefer glycolysis as a means to turn glucose into their fuel.

Medical College of Georgia scientists have shown that in retinal disease, the excessive byproducts of this inefficient fuel production system initiate a crescendo of crosstalk between these two cell types. The talk promotes excessive inflammation and development of the classic mass of leaky, dysfunctional capillaries that can obstruct vision and lead to retinal detachment, says Dr. Yuqing Huo, director of the Vascular Inflammation Program at MCG’s Vascular Biology Center.

The major byproduct of glycolysis is lactate, which also can be used as a fuel, for example, by our muscles in a strenuous workout. Microglia also need some lactate from the endothelial cells. But in disease, the lactate is in definite oversupply, which instead supports this destructive conversation between cells, says Huo, corresponding author of the study in the journal Science Translational Medicine.

“This is a major problem in our country, loss of vision because of compromised oxygen for a variety of reasons,” says Dr. Zhiping Liu, postdoctoral fellow in Huo’s lab and the study’s first author. “We hope this additional insight into how that process destroys vision, will enable us to find better ways to intervene,” Liu says.

In a low-oxygen environ, endothelial cells produce not only a lot of lactate, but also factors that encourage nearby microglia to be more active, and to use glycolysis to get more active, Huo says.

In reality, microglia don’t need the encouragement because they already also seem to prefer this method of energy production. But the extra lactate sent their way does spur them to produce even more energy and consequently even more lactate, Huo says.

The normally supportive immune cells also start overproducing inflammation-promoting factors like cytokines and growth factors that promote blood vessel growth or angiogenesis, which, in a vicious loop, further turns up glycolysis by the endothelial cells, which are now inclined to proliferate excessively.

“The reciprocal interaction between macrophages and (endothelial cells) promotes a feed-forward relationship that strongly augments angiogenesis,” they write.

The destructive bottom line is termed pathological angiogenesis, a major cause of irreversible blindness in people of all ages, the scientists say, with problems like diabetic retinopathy, retinopathy of prematurity and age-related macular degeneration.

“Our eyes clearly do not have sufficient oxygen, and they end up trying to generate more blood vessels through this process called pathological angiogenesis, which is really hard to control,” Huo says.

“In all these conditions, there is something wrong with the tissue that causes the blood vessels to not behave properly,” says coauthor Dr. Ruth B. Caldwell, cell biologist in the Vascular Biology Center. “It’s a bad state,” she says, which they want to help normalize.

As they are finding more about how the conversation goes bad between these two cells, they are seeing new logical points to do that. When they knock out the most potent activator of glycolysis, called Pfkfb3, from the microglia, lactate production clearly goes down and the cells no longer aid production of dysfunctional capillaries. Conversely, expression of both the messenger RNA that enables production of Pfkfb3 and lactate are significantly higher in the cells when oxygen levels are low.

Agents that stop these cells’ over-the-top use of glycolysis could be good therapeutic approaches, they say. Blocking excessive lactate production could be another. Stopping the microglia from lapping up too much lactate also significantly suppresses pathological angiogenesis in their lab studies. Agents that normalize endothelial cell growth might work as well.

While genetic manipulation was used for much of their lab work to date, the scientists are now looking at chemicals that might work at these various points. A problem is that many drugs that suppress glycolysis have numerous unwanted effects, so they are working to more selectively intervene. They note that since the use of glycolysis by macrophages is critical to support of a healthy immune response, localized inhibition should yield the desired response without affecting the immune response.

Current treatments for abnormal blood vessel development and related leaking and swelling include suppressing vascular endothelial growth factor, or anti-VEGF, which, as the name implies, is a key factor in endothelial cell growth, may require ongoing injections in the eye and gets decent results in conditions like diabetic retinopathy. But anti-VEGF therapy really does not facilitate repair, says Caldwell. The scientists have early evidence their intervention strategies may, because they intervene earlier and help normalize the “bad” environment. “We get repair and restoration,” Caldwell says.

Huo and his colleagues are among those who have shown that glycolysis is critical to the sprouting of endothelial cells and that mice lacking Pfkfb3 have impaired angiogenesis.

Endothelial cells, which line all our blood vessels, are one of the first things laid down when we make new blood vessels. In the retina, they start making tiny tunnels that ideally will become well-functioning capillaries, blood vessels so small that a single red blood cell may have to fold up just to get through. These thin-skinned blood vessels are the point where oxygen, fluid and nutrients are provided to body tissue, then blood gets routed back through the venous system to the heart where the process starts anew.

Endothelial cells grow accustomed to glycolysis when they are helping make our bodies in the early, no-oxygen days during development, Huo says.