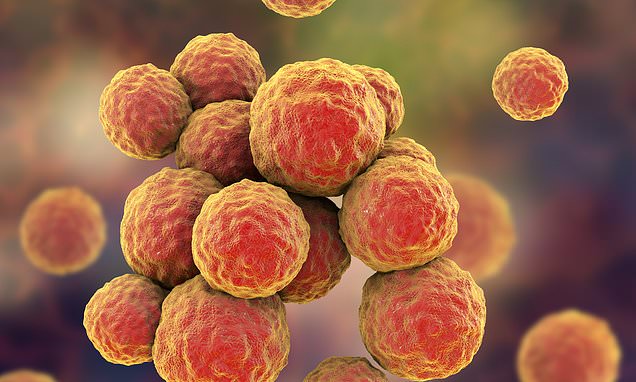 ‘Game-changing’ antibiotic could be used as a ‘last line of defence’ against superbugs to save millions of lives from drug-resistant infections, study suggests

A ‘game-changing’ antibiotic could save millions of lives lost to superbugs worldwide each year, a study suggests.

In a breakthrough, British scientists have developed synthetic versions of the compound teixobactin — the first new antibiotic discovered in decades.

The man-made drugs were able to kill antibiotic-resistant bacteria in mice without harming healthy tissue in research led by the University of Liverpool.

Teixobactin was originally discovered in 2015 after being extracted from a field in Maine in the US, in what was hailed as a watershed moment in the growing fight against antibiotic-resistant superbugs.

But its roll out has been held back because the natural compound is expensive and difficult to produce.

The team in Liverpool were able to reproduce teixobactin synthetically, keeping the same superbug-busting properties of the original while costing 2,000 time less.

It successfully eradicated methicillin-resistant Staphylococcus aureus — a superbug known as MRSA, which is resistant to several widely used antibiotics — in mice.

The researchers were also able to destroy a wide range of microbes taken from human patients.

They hope the drug will in the future be used as a ‘last line of defence’ against drug-resistant superbugs, estimated to kill or contribute to nearly 7million deaths a year. 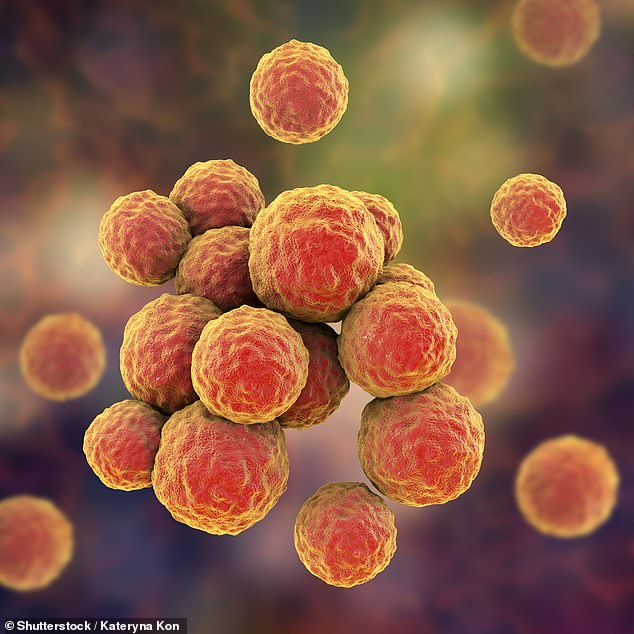 Teixobactin is a molecule produced by a type of bacterium which lives in soil.

Where did it come from?

A bacterium, called Eleftheria terrae was discovered in 2015 in a soil sample collected in Maine in the US using a new technique to isolate specific species of bacteria from dirt.

It was found to produce an antibiotic, later named teixobactin which effective against drug-resistant bacteria.

Many bacteria naturally make antibiotics to keep themselves safe and kill competitors for food and space.

How does it teixobactin work?

The molecule binds to two kinds of fat (called lipids) found in the cell walls of bacteria and effectively killing it.

This is different from many other kinds of antibiotics which disrupt protein replication in bacteria.

It is thought teixobactin’s method of killing bacteria will be harder for microbes to evolve a defence against.

Why it is important?

Teixobactin is the most promising new antibiotic found in decades.

Some types of bacteria have evolved to become resistant to existing drugs.

These so called superbugs are more difficult to treat and can be deadly.

A report published this year found superbugs killed 1.2million in 2019, more than AIDS or malaria.

Superbugs are bacteria that have evolved a resistance to antibiotics due to the drugs being overprescribed or incorrectly used, a phenomena called antimicrobial resistance (AMR).

The rise of superbugs has stoked fears from scientists that we are approaching a post-antibiotic era where common conditions and medical operations become more dangerous as patients succumb to previously treatable bacterial infections.

But scientists involved in the latest study say patients in the future may be treated with just one dose of teixobactin per day for systemic life-threatening resistant bacterial infections.

Synthetic teixobactin can also be kept at room temperature, making global distribution easier by eliminating the need for expensive refrigerated storage and transport, the researchers said.

Those leading the project, which was delivered in association with the University of Lincoln, hope the results may pave the way for the drug to be produced cheaply on a large scale.

Further tests are needed on scaling up the production before safety tests for use in people can be run.

Lead researcher Dr Ishwar Singh, an expert in antimicrobial drugs at Liverpool University, said the breakthrough was a significant step towards unlocking the full medical potential of teixobactin to tackle superbugs.

‘Our ultimate goal is to have a number of viable drugs from our modular synthetic teixobactin platform which can be used as a “last line of defence” against superbugs to save lives currently lost due to AMR,’ he said.

He said the team hoped to eventually get synthetic teixobactin ready for safety testing on humans, which, if successful, could lead to a drug being developed to treat drug resistant bacterial infections worldwide.

Dr Phil Packer, from Innovate UK, the agency which delivered the latest project, said the results had been ‘excellent’.

‘We are delighted with results, which have validated synthetic teixobactin’s promise to tackle resistant bacterial infections when currently used antibiotics fails. We look forward to following this journey closely in future,’ he said. 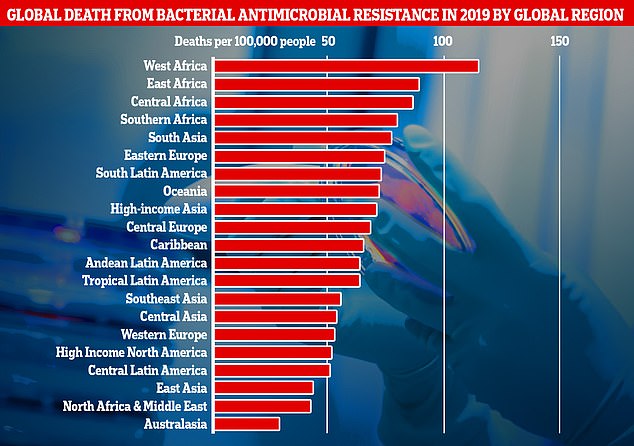 This graph shows the combined direct and associated deaths from antibiotic-resistant bacteria per global region measured in the new research. Africa and South Asia had the greatest number of deaths per 100,000 people, however Western European countries like, the UK, still recorded a significantly high number of fatalities 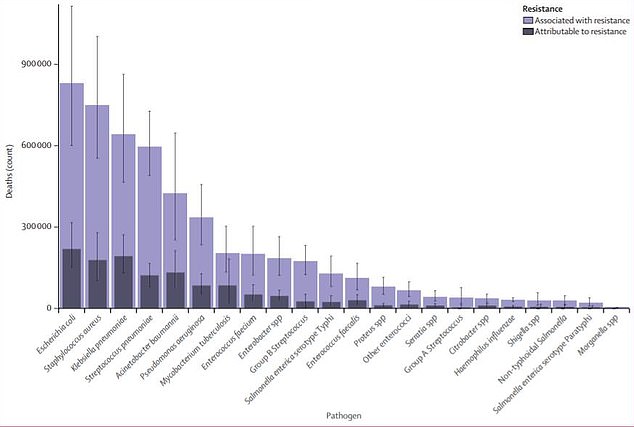 This graph shows the 23 antimicrobial resistance pathogens included in the study and the number of deaths attributed to each of them in 2019. Just six of these were directly responsible for 900,000 deaths and contributed to 3.5million more.

Health Secretary Sajid Javid said: ‘It is fantastic to see such innovative work like this happening in the UK – another clear example of this country being at the forefront of scientific advancements which can benefit people across the world.’

An AMR review commissioned by the UK Government has predicted that an extra 10million people will succumb to drug-resistant infections each year by 2050.

Covid is also thought to be speeding up the global threat of antimicrobial resistance through the inappropriate use of antibiotics which do not work against viruses.

WHAT IS ANTIBIOTIC RESISTANCE?

Antibiotics have been doled out unnecessarily by GPs and hospital staff for decades, fueling once harmless bacteria to become superbugs.

The World Health Organization (WHO) has previously warned if nothing is done the world is heading for a ‘post-antibiotic’ era.

It claimed common infections, such as chlamydia, will become killers without immediate solutions to the growing crisis.

Bacteria can become drug resistant when people take incorrect doses of antibiotics or if they are given out unnecessarily.

Former chief medical officer Dame Sally Davies claimed in 2016 that the threat of antibiotic resistance is as severe as terrorism.

Figures estimate that superbugs will kill 10 million people each year by 2050, with patients succumbing to once harmless bugs.

Around 700,000 people already die yearly due to drug-resistant infections including tuberculosis (TB), HIV and malaria across the world.

Concerns have repeatedly been raised that medicine will be taken back to the ‘dark ages’ if antibiotics are rendered ineffective in the coming years.

In addition to existing drugs becoming less effective, there have only been one or two new antibiotics developed in the last 30 years.

In 2019, the WHO warned antibiotics are ‘running out’ as a report found a ‘serious lack’ of new drugs in the development pipeline.

Without antibiotics, C-sections, cancer treatments and hip replacements will become incredibly ‘risky’, it was said at the time.