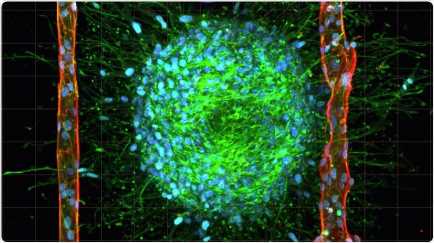 As a potential alternative for drug testing without lab animals, researchers at KTH Royal Institute of Technology developed and successfully tested a 3D model of living brain cancer that surmounts one of the biggest challenges in tissue engineering. 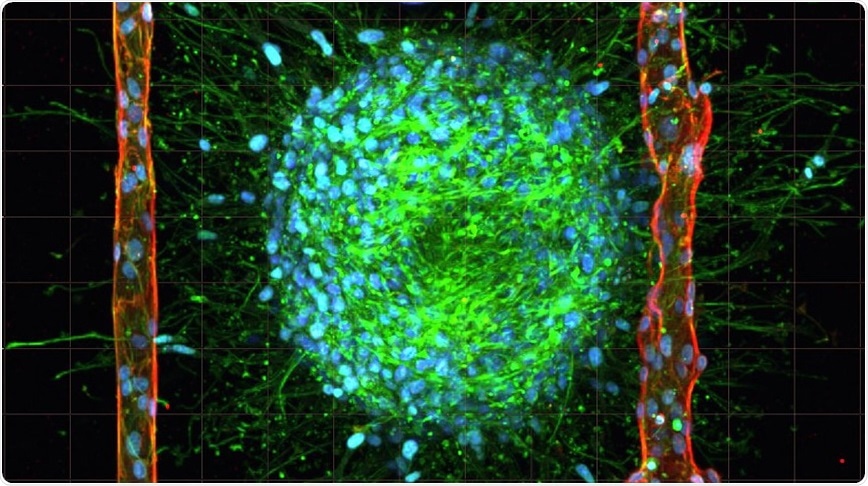 In the recent issue of the scientific journal, Advanced Materials, the researchers reported a technique for replicating the body’s smallest blood vessels, otherwise known as microvasculature, inside of collagen hydrogel loaded with living cancer cells. The technique, which is called cavitation molding, creates cavities small enough for cells to form into blood vessels on a scale more closely resembling those of the human body.

The study’s lead author, Alessandro Enrico, a PhD student the Division of Micro and Nanosystems (MST) at KTH, says that the technique to create cavities for these blood vessels represents a breakthrough in biomedical research and that the method could potentially be used for modeling other kinds of human tissues besides cancerous ones.

For drug development the only alternative to costly animal testing is simple 2D cell models, in which human cells are cultured on plastics in a flat, two-dimensional arrangement. He says that although “lab-on-a-chip” platforms in 2D are used to replicate living tissue, they’re ultimately limited by their simplicity.

2D tissue models slow down testing and makes it more expensive. The results of working with a 3D model relate to the actual 3D dimensional tissue in the human body.”

Replicating a 3D tissue model would bridge the gap between simple 2D models and actual tissue physiology, he says. “But to obtain a 3D microvasculature in a hydrogel scaffold while maintaining cell viability is no easy feat”.

To create the microvasculature that complex tissues like living brain cancer need to survive, the researchers began by casting an unstructured collagen hydrogel containing living cancer cells. Then, they use laser irradiation of the hydrogel to generate gas bubbles that rearrange the collagen fibers, thereby creating cavities and shaping microchannels. Finally, endothelial cells are pumped into the cavities, whereupon they assemble in artificial blood vessels similar in size to the vasculature of the human body.

The process causes no damage to the cells, a real risk with bioprinting techniques currently in development, he says.

The 3D tissue models closely replicate living tissue and remained stable for at least eight days in physiological conditions. “This is essential for studying complex biological interactions that can take days or weeks to develop,” Enrico says.

Enrico says that the next step is to investigate the compatibility of this method with other hydrogels to model different tissues and organs.