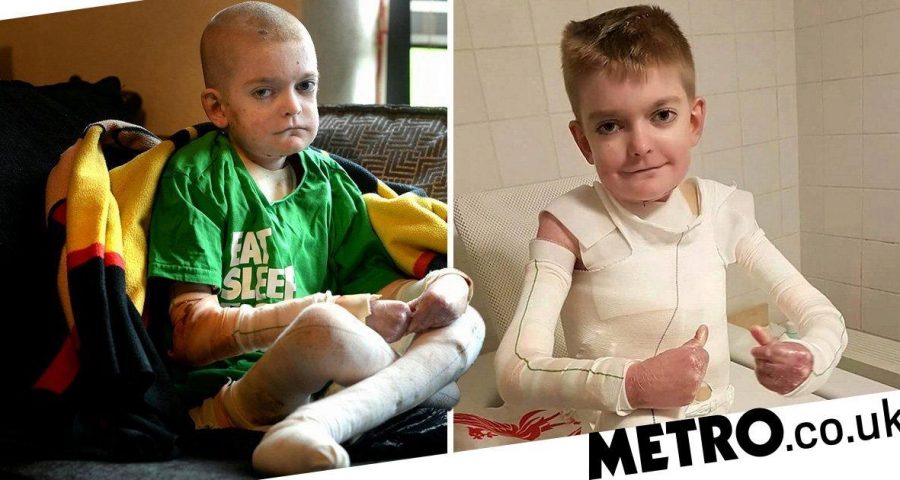 Tanya Williams is asking strangers to send birthday cards to her son Rhys, 13, who has a severe skin condition.

The heartbroken mum wants to bring some hope and light to Rhys who says he has ‘had enough of life’.

The 13-year-old uses a wheelchair due to severe epidermolysis bullosa, a condition which results in painful skin blisters, sores and has caused his fingers to fuse together.

When Rhys was born Tanya and her partner Mark had no idea whether he would ever reach his teenage years.

Rhys, from Bolton, Lancashire, says he wishes ‘a butterfly would come and take him away’ and his devastated mum is desperate to show him he has something to fight for.

Tanya said: ‘He just wants to give up, he doesn’t want to fight anymore. What do you do as a mum?’

With his birthday coming up on 14 September, Tanya, 36, wants Rhys to see that people care and are thinking about him.

She says his life depends on it.

The condition causes Rhys’ skin and internal tissue to blister at the slightest knock or rub, leaving him with painful open wounds.

He is now reliant on a wheelchair as he is unable to straighten his legs due to the fusing of the skin at the back of his knees.

His body is covered in bandages, which have to be changed three times a day to prevent him from developing any deadly infections.

‘He’s such a happy boy most of the time but recently it’s a struggle to try and get through to him,’ said Tanya.

‘Rhys’ life revolves around school, Xbox, sleep, repeat. He doesn’t want to go out because he doesn’t like the way people look at him.

Tanya had the idea to ask strangers for birthday cards after she noticed how happy Rhys was when he received Christmas cards last year.

He opened the hundreds of letters sent to him, and Tanya wants to give him the same happiness once again.

She hopes he can find something to look forward to once again.

At the moment his pain is so severe that he has to take morphine to try to control it.

His family are unable to hug him, he is unable to play outside with friends, go on holidays, attend birthday parties and even go shopping.

He also has to be fed through a tube as eating solid food can cause his gullet to blister.

Those who want to send a card to Rhys can do so at 40 Whalley Avenue, Bolton, BL1 5UD.

What is epidermolysis bullosa

The skin of those who have DEB is more fragile than normal. Minor injury causes blisters which often leave scars when they heal.

DEB is not an infection, it is not contagious and it is not due to an allergy.

There is currently no cure and treatment focuses on tackling the symptoms, providing pain relief, and preventing infection.

It is caused by faulty genes which produce collagen, a strong protein in the fibres that holds the skin together.