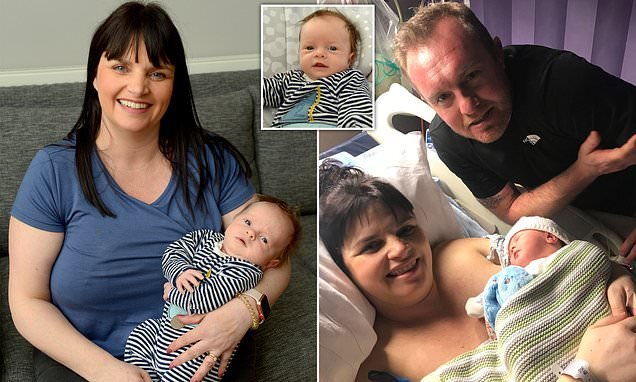 Woman, 40, who suffered TEN miscarriages finally gives birth to her ‘miracle’ son after refusing to give up on her dream of becoming a mother

A woman who suffered ten miscarriages has finally given birth to her ‘miracle’ baby after more than a decade of trying.

Jen Bickel, 40, of Birchgrove, Cardiff, became pregnant six times naturally and four through IVF, however, each one ended with heartbreak.

After enduring multiple ectopic pregnancies, Mrs Bickel, married to Andrew, was forced to have her fallopian tubes removed.

Faced with the reality she would never become pregnant naturally, Mrs Bickel had a frozen embryo implanted into her womb.

Although thrilled to become pregnant for the eleventh time, the couple refused to get their hopes up and did not even shop for baby clothes until the weeks before the due date.

Against all odds, their son Bobi William Bickel was born via C-section on February 9 weighing 6lb 8oz. 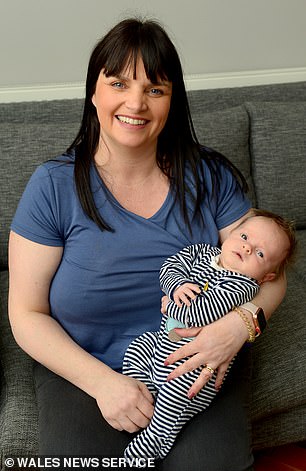 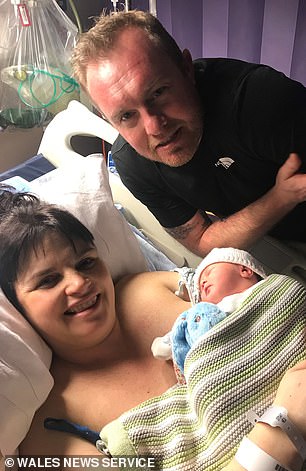 Jen Bickel suffered ten miscarriages before giving birth to her ‘miracle’ baby boy Bobi William Bickel (pictured together left). Mrs Bickel and her husband Andrew (pictured together right) refused to give up on their dream of starting a family, even when the odds were against them 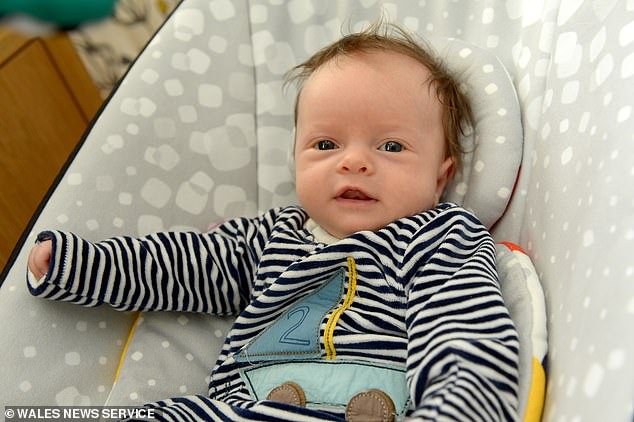 Speaking of her difficult road to motherhood, Mrs Bickel said: ‘There have been so many low points in my journey to becoming a mother, it’s tricky to pick out the lowest.

‘As newlyweds, we never dreamed that having a baby would prove so testing. Back then, we were both fit and healthy 29-year-olds.’

Mrs Bickel first became pregnant in 2007 but miscarried at six weeks, before she even knew she was expecting.

‘I was upset but not too devastated; we had time on our sides after all,’ she said.

‘But it was 18 months before I fell pregnant again and this time I miscarried at 11 weeks.’

The couple were heartbroken by their loss and faced mixed emotions at seeing their friends conceive.

‘Many of our friends were starting families and although we were happy for them, it made our losses all the more acute,’ Mrs Bickel said.

‘Personally, I couldn’t help but blame myself. Why was my body failing me? What had I done?’ 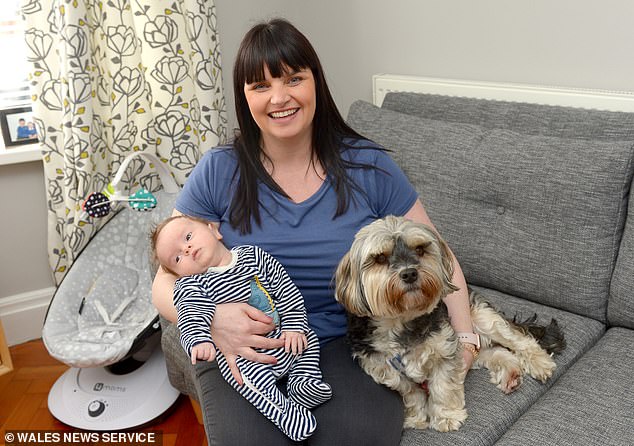 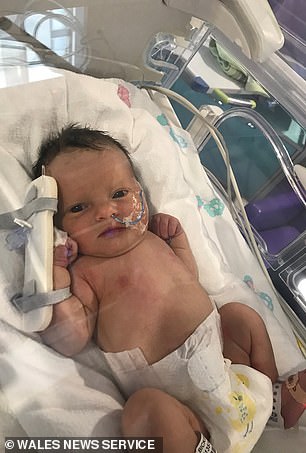 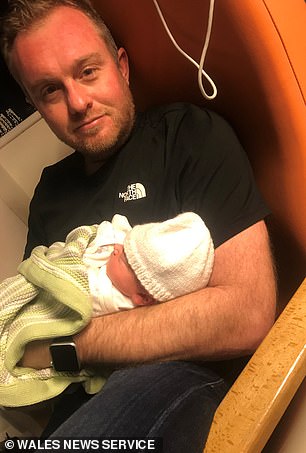 Bobi (left) had a dramatic start when the umbilical cord became wrapped around his neck during labour, causing his heart rate to drop. Mr Bickel (right) is thrilled to finally be a father

Mrs Bickel miscarried again in 2009 when an early scan showed her baby had no heartbeat.

Desperate, the couple turned to IVF in 2010 and created ten embryos in their first round. Sadly, the cycle failed to result in pregnancy.

‘A few months later, we tried again, this time receiving a positive pregnancy test – but again a foetus with no heartbeat,’ Mrs Bickel said.

‘By this stage, we were desperate. Unsure of how to proceed, we paid out £2,000 for private tests, had acupuncture and bought supplements – yet nothing helped.

‘Still, we could not give up, so we had no option but to steel our nerves and keep trying.’ 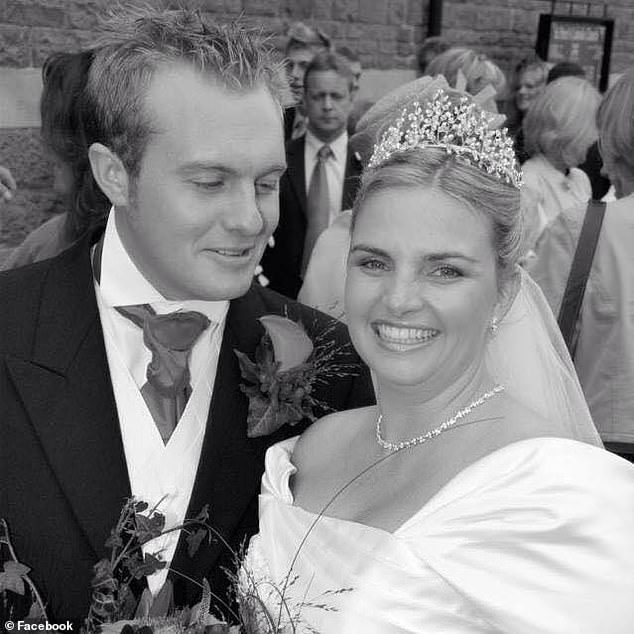 Mr and Mrs Bickel (pictured on their wedding day) conceived shortly after they got married. But Mrs Bickel miscarried at six weeks, before she even knew she was pregnant. The couple, who were then 29, remained positive, thinking they had ‘time on their side’

In 2014 the couple paid to have two embryos implanted into Mrs Bickel’s womb at a private clinic.

‘But in the October, while out for my birthday, I felt a terrible pain in my side, which turned out to be an ectopic pregnancy,’ she said.

‘This was the end of the road of IVF. We had no frozen embryos left and no more money for treatment.’

Mrs Bickel claims they spent at least £5,000 on each round of IVF.

‘Amazingly, we were then thrown a lifeline when the IVF clinic gave us a free round, after nurses voted us the most deserving couple,’ she said.

‘We implanted two embryos which failed, but froze a further three.’

Mrs Bickel then suffered a further two ectopic pregnancies, which meant her fallopian tubes had to be removed.

‘I was heartbroken, knowing I would never conceive naturally,’ she said.

‘In total, over the past decade, I had fallen pregnant ten times – six times naturally and four times through IVF – and we couldn’t take anymore.’ 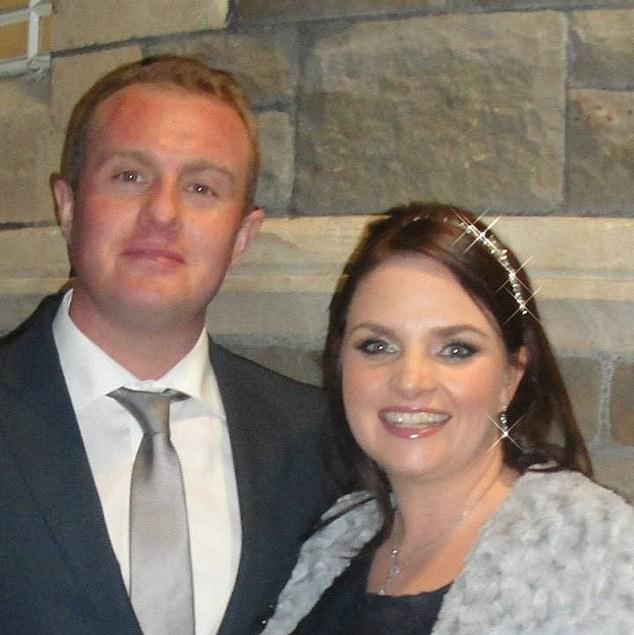 Despite everything they went through, the couple refused to give up hope.

‘All we had were the frozen embryos – our last hope – and we were keeping everything crossed,’ she said.

‘It took months before the lining of my womb was considered thick enough to try.

‘But once it was, we implanted one embryo and after another agonising two-week wait, received a positive pregnancy test.’

By this time, the couple had learnt not to get their hopes up.

‘But there was something different this time – a tiny heartbeat, something we had never seen before. We were ecstatic.

‘Still, though, even when I went through morning sickness and learnt we were having a boy, Andrew found it hard to believe.

‘He was incredibly supportive, but he refused to shop for baby things or decorate the nursery until the very last weeks before my due date.’ 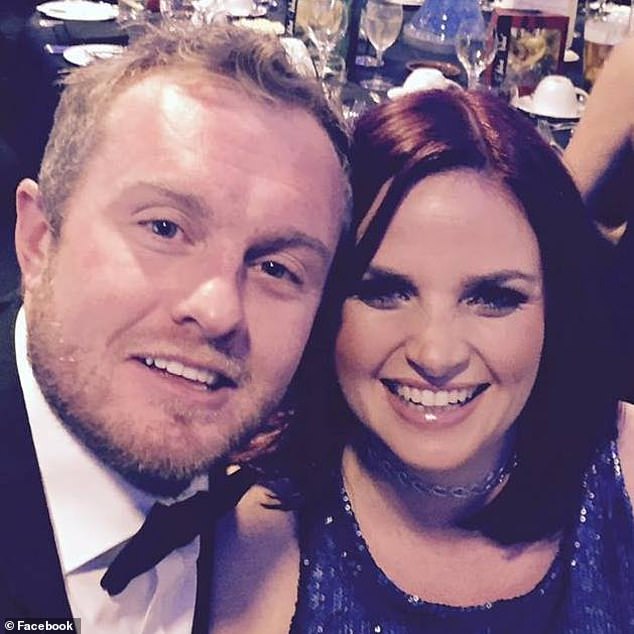 How at least one in six pregnancies ends in a miscarriage

One in six pregnancies in women who know they are pregnant become miscarriages.

But more will happen among women who don’t know they are carrying a child.

Miscarriage is a when a baby dies within the first 23 weeks of a woman’s pregnancy.

The main symptoms are bleeding from the vagina, which may be accompanied by lower abdominal pain.

There are various reasons women may have a miscarriage – it is common and is not usually caused by something they have done.

If a miscarriage happens in the second trimester – between weeks 14 and 26 – it may be a sign of an underlying problem.

Often, miscarriages are one-off events and women will go on to have successful pregnancies.

The majority of miscarriages can’t be prevented, although being generally healthy will help reduce the risk.

Losing three or more pregnancies in a row – known as recurrent miscarriages – is uncommon but still affects around one in 100 women.

Mrs Bickel – who was 40 when she gave birth – was induced ‘to make sure the placenta didn’t begin to fail’.

‘But, after hours of contractions, doctors realised the baby’s heartbeat was dropping as the cord was wrapped around his neck,’ she said.

‘Everyone knew how high the stakes were – this could not go wrong – so I had a Caesarean, and in the early hours of 9 February, our miracle baby arrived weighing 6lb 8oz.’

After everything they have been through, the couple are embracing all aspects of parenthood.

‘Bobi William Bickel is now six weeks old and I do not care if he cries all day or wants to feed all night; I have everything I ever wanted,’ Mrs Bickel said.

The couple are not ruling out having more children but are ‘grateful’ for what they have.

‘As for us, we still have two embryos in the freezer and I’m sure at some point we will try and implant them,’ Mrs Bickel said.

‘If they work, so be it. If not, we have our beautiful boy, and after more than a decade of heartbreak, we could not be more grateful.’

She is speaking out to encourage others who are struggling to conceive to seek support.

‘Andrew and I were always each other’s rock but we would advise people to seek support.’