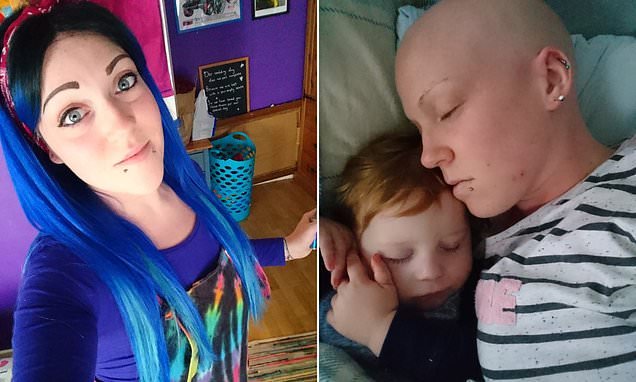 A mother-of-two has revealed how a hug with her son ended up saving her life after it revealed a cancerous lump on her breast.

Emily Makin, from Wigan, lifted her arms to cuddle Harrison, now three, when she spotted a mass at the top of her right breast last summer.

Initially thinking it was just a symptom of her period, Mrs Makin went to get the lump checked out just in case. A doctor referred her for further tests immediately.

Mrs Makin, 28, was diagnosed with triple negative breast cancer – an aggressive form of the disease – just a week later.

The same month, Mrs Makin, married to 35-year-old AJ, had a mastectomy to remove her right breast and a 4.5cm tumour.

Mrs Makin revealed she had not suffered any other symptoms in the lead up to her diagnosis and was in peak physical fitness after joining Slimming World and taking up running. 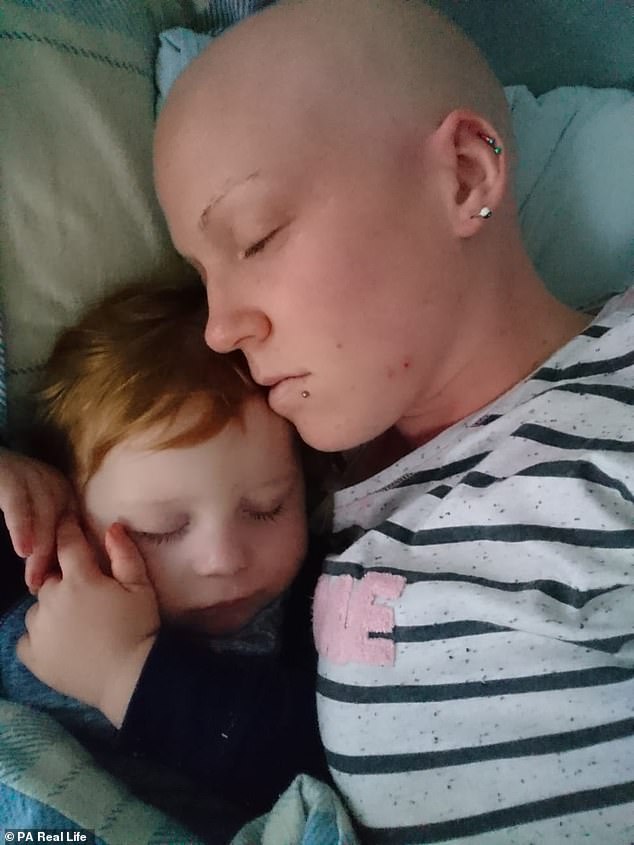 Emily Makin, 28, of Wigan, Greater Manchester, lifted her arms to hug Harrison, three, when she spotted a lump at the top of her right breast. It turned out to be an aggressive form of breast cancer. Pictured, with her other son Freddie, two, during chemotherapy 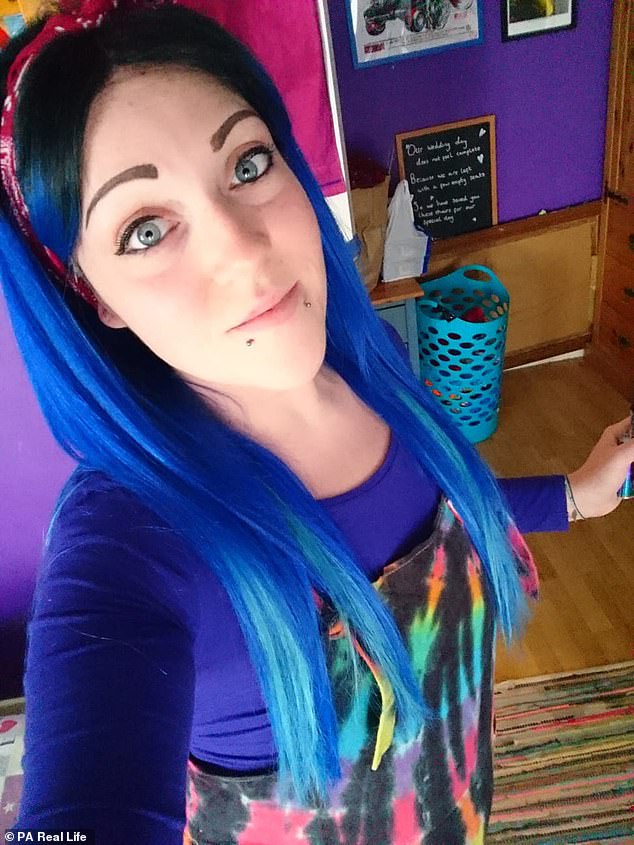 After a string of tests, Mrs Makin was given a triple negative breast cancer diagnosis in July 2018. Pictured, during chemotherapy wearing a wig 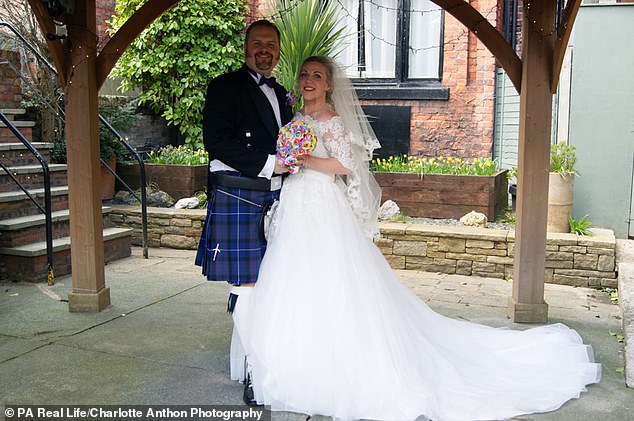 Mrs Makin had suffered no symptoms in the lead up and that summer, of 2018, and had recently married AJ, pictured, a few months before 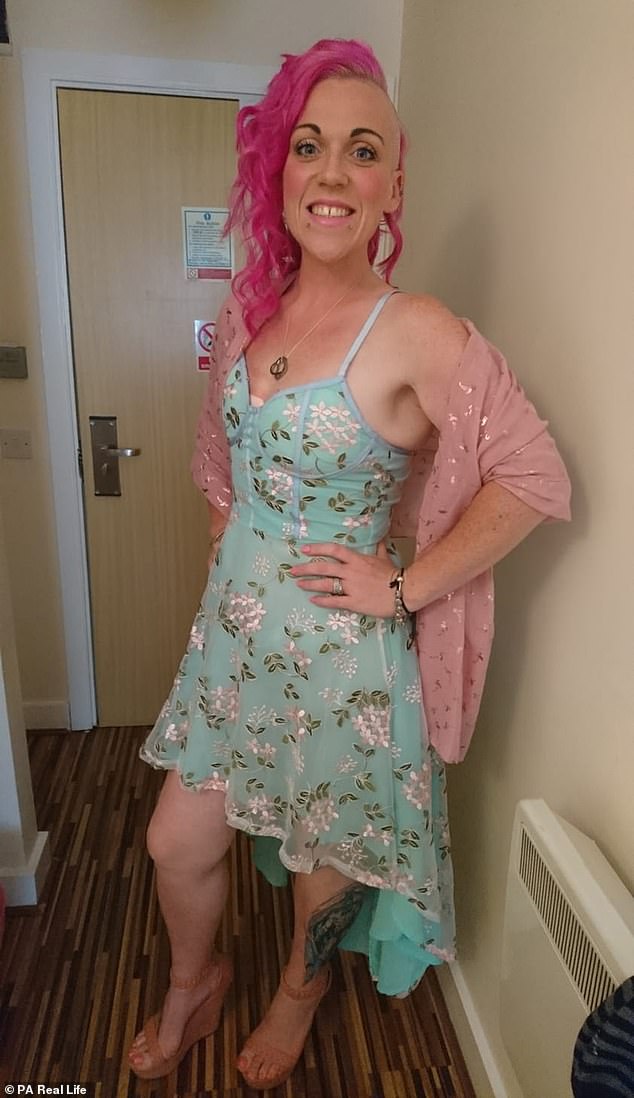 Mrs Makin was in her peak physical fitness before her diagnosis, which came as a shock

Speaking of the cuddle she had with her son, Mrs Makin, a full-time mother, said: ‘I lifted my arms up to hug my son and spotted it.

‘I’d just come off my period, so at first thought it could be hormonal and connected to that.

‘But it nagged at me. It wasn’t something I wanted to leave, so I made an emergency doctor’s appointment a couple of days later.

‘Once they told me [the diagnosis] I just wanted to go somewhere and scream to let it all out. I was very angry, very, “why me?” But then, once that passed, I realised I had to fight.’

Mrs Makin, who also has another son Freddie, two, told how, leading up to her diagnosis, she saw no signs of what was to come.

Instead, she was feeling fitter and healthier than she had in years before everything changed that day in July 2018.

After seeing her doctor, Mrs Makin was referred right away to a breast clinic where she had tests including a core biopsy – where a needle is passed through the skin to take a tissue sample from a mass or lump.

Mrs Makin said: ‘It was at the point of the mammogram that my mind started to go, “This isn’t good.” I knew something serious was going on.’

Around a week later, Mrs Makin was called back in for the results, which sadly confirmed her worst fears. 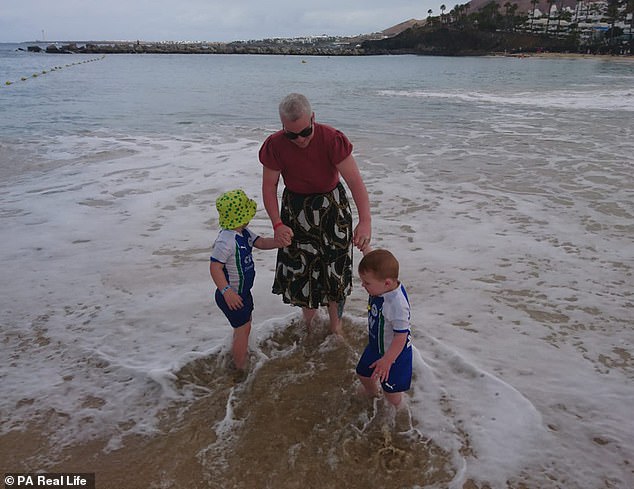 Mrs Makin, pictured with her sons during treatment, went to the doctors as the lump, which she thought could be a side effect of her period, was playing on her mind 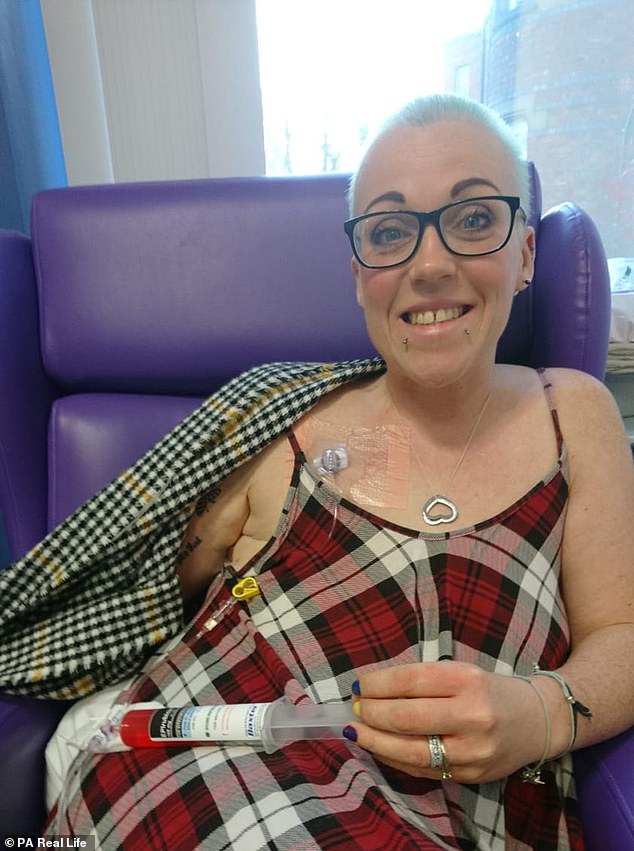 Mrs Makin had a mastectomy the same month as her diagnosis, removing her right breast and the 4.5cm tumour, followed by chemotherapy (pictured) and radiotherapy 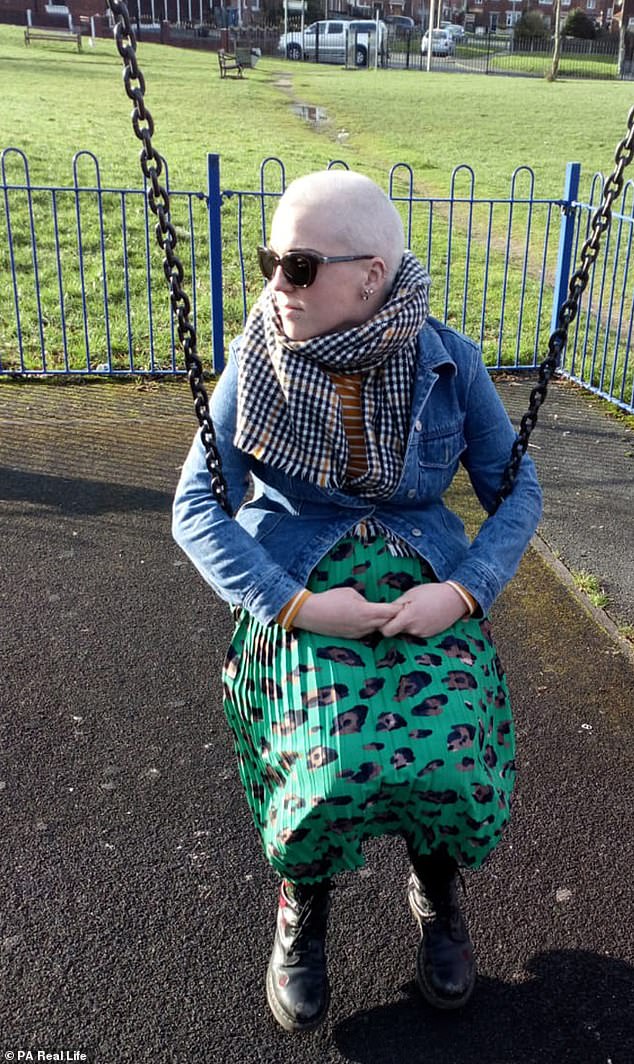 Mrs Makin decided to shave her head rather than wait for her hair to fall out as a result of the treatment. Pictured after her radiotherapy finished

She said: ‘A doctor and nurse came to see me and I remember seeing a breast cancer leaflet in the nurse’s pocket and realising what was coming.

‘I can’t fault the doctor, he was absolutely lovely. He sat me down, looked me in the eye and said, “I’m really sorry, but it’s breast cancer.”

‘The tears then just started streaming down my face. All I wanted was to get home with AJ and the boys and lock myself away from the world.

‘There was lots of talk about what it all meant and what would happen next, but I couldn’t process anything. All I’d heard was the word cancer.’

On 19 July, Mrs Makin had her first bout of treatment, a single mastectomy, at Royal Albert Edward Infirmary in Wigan.

She said: ‘That was an easy decision for me to make. I was adamant I wanted it, as I just wanted the cancer to be gone and to feel like I was getting better.

‘I wasn’t attached to my breasts. They’d done their job, fed my kids – I didn’t need them.

‘I knew AJ wouldn’t care what I looked like either. He’s very good and supportive like that.’ 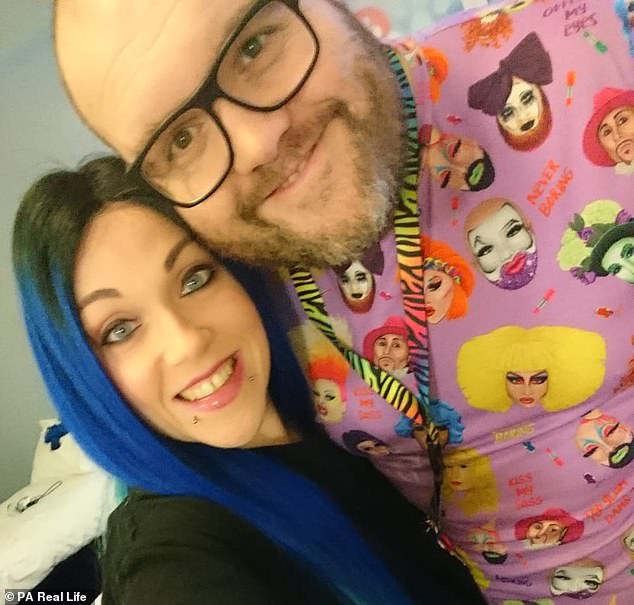 Speaking of having her mastectomy, Mrs Makin, pictured during chemo, said: ‘I wasn’t attached to my breasts. They’d done their job, fed my kids – I didn’t need them. I knew AJ [pictured] wouldn’t care what I looked like either. He’s very good and supportive like that’ 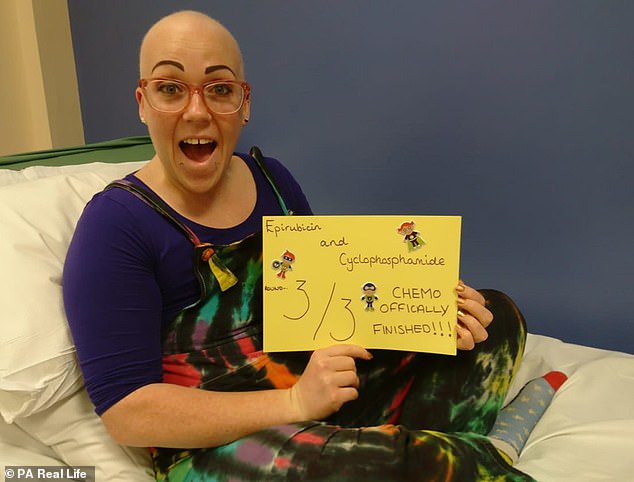 Speaking of her diagnosis, Mrs Makin, pictured at the end of her chemotherapy in hospital, said: ‘I couldn’t process anything. All I’d heard was the word cancer’ 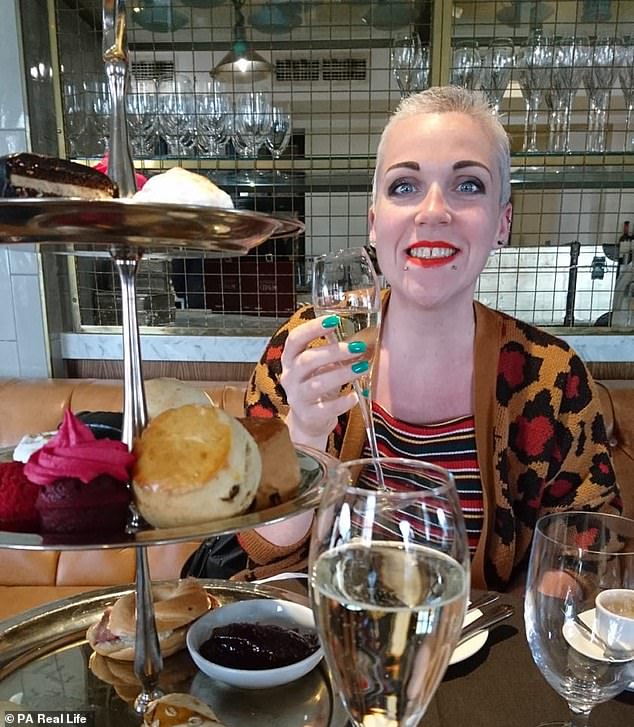 No longer receiving any treatment, Mrs Makin is now awaiting a mammogram to determine whether or not she is in remission. Pictured in early 2019 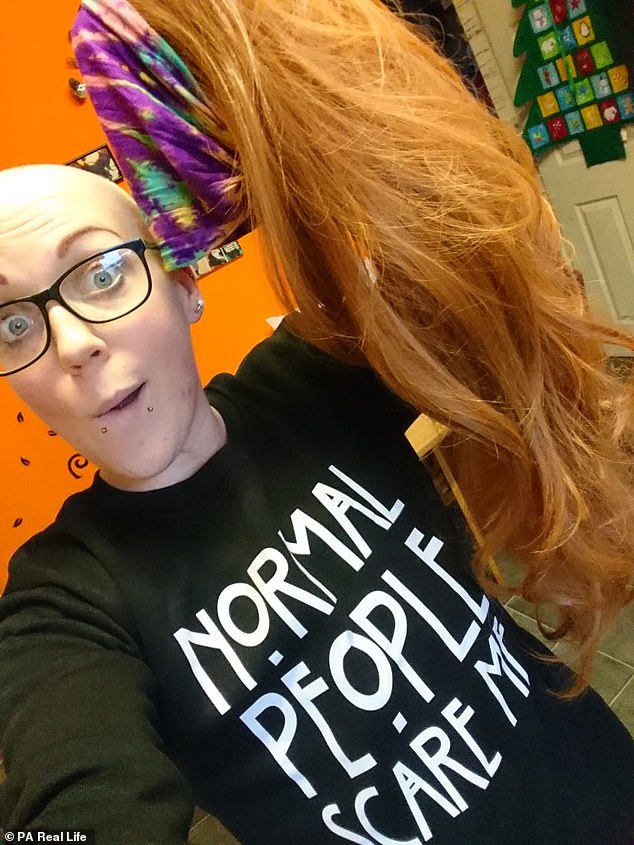 Mrs Makin took control of her hair during chemotherapy saying, ‘First, I shaved half of it and dyed it pink, then I went for a purple mohawk before finally being a green skinhead’

After that, Mrs Makin had chemotherapy, lasting from September to December.

Keen to take back a little control, she decided to shave her head rather than wait for her blonde locks to fall out as a result of the treatment.

Mrs Makin said: ‘It was the one thing I had control over. Cancer wasn’t taking that from me too.

‘First, I shaved half of it and dyed it pink, then I went for a purple mohawk before finally being a green skinhead.

‘There was so much going on that it was really important to me to hold on to those little moments of positivity.’

After finishing chemotherapy on 28 December, Mrs Makin then had radiotherapy from January up until 18 February, to ensure all cancerous cells had gone.

No longer receiving any treatment, she is now awaiting a mammogram to determine whether or not she is in remission.

Mrs Makin, who has blogged throughout her journey, is currently gearing up to run the Race For Life on May 22 to raise money for Cancer Research UK.

She said: ‘I would run all the time before my diagnosis threw me into a whirlwind, and was really keen to get back to it, so I started a couch to 5km programme a week after finishing chemotherapy.

‘I don’t want people to be paranoid, but rather to be aware of changes in their bodies and how to check themselves for lumps.

‘I never thought this would happen to me, particularly so young, so I hope my story can help others.’

Mrs Makin is supporting Race for Life in partnership with Tesco. Join your local event at www.raceforlife.org. 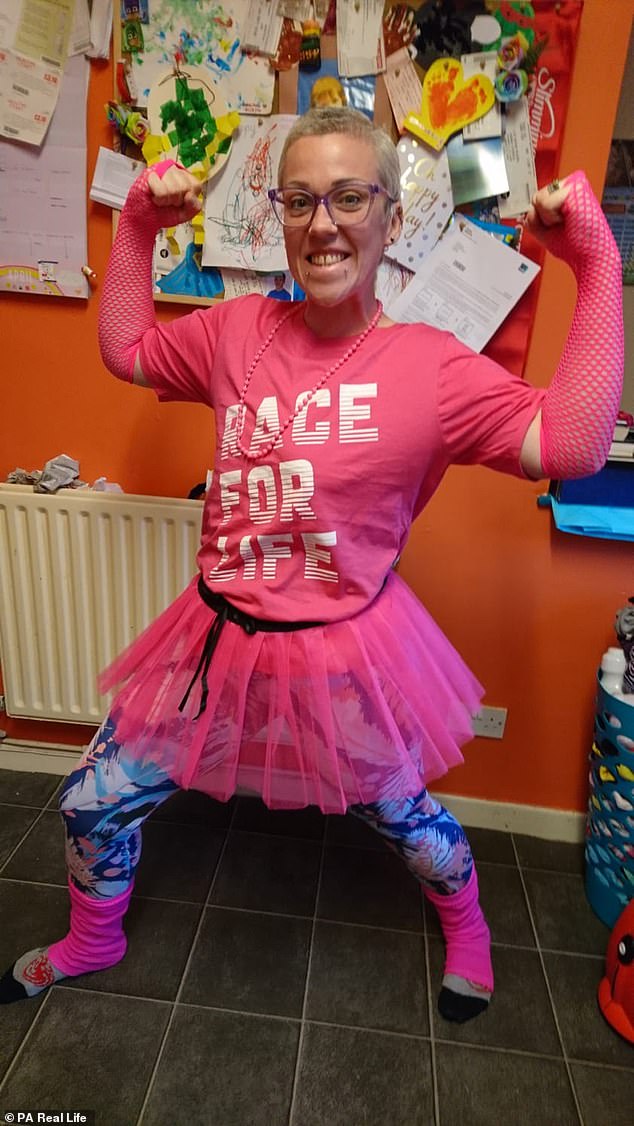 HOW TO CHECK YOUR BREASTS

What to look out for

This is why it is so important to feel AND look at you r boobs. Dimpling and puckering of the skin can look similar to orange peel

It is important to check not just your boob but your upper chest and armpit too, as these areas also contain breast tissue

This is liquid that comes from the nipple without squeezing it

Most women may naturally have one boob bigger than the other or experience their boobs gradually changing as they get older.

Many changes are perfectly normal, however if you notice a sudden, unusual change in size or shape then get it checked out

All this means is your nipple has become pulled into the boob or looks different to usual. This could be a change in its position or shape. That’s why it is important to pay special attention to your nipple during your regular checks

There are many reasons why your skin could become irritated, especially if you are breast feeding, but if you notice any redness or a rash on the skin and/or around the nipple or any crusting of the nipple, make sure you get it checked out by your doctor

What to feel for

Some boobs are naturally lumpy and this can be perfectly normal. The key is to get to know how your boobs feel, so you would notice if any new lumps appear or if your boob starts to feel thicker in one area compared to the rest

Some breast pain can be perfectly normal, especially around your period. But keep an eye out for any unexplained pain in your breast or your armpit that’s there all or almost all of the time