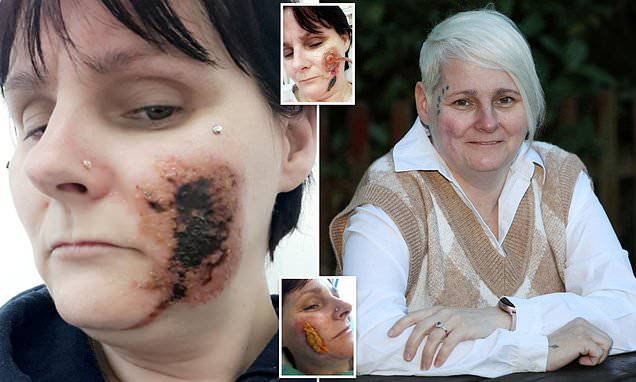 Mother, 45, was left with a HOLE in her cheek after accidentally splashing her face with oven cleaner

A mother was left with a hole in her cheek after accidentally dabbing oven cleaner on her face.

Maura Prendergast, from Ireland, left her wire oven racks to soak in a bag of Oven Pride overnight.

Trying to cook dinner for her six children, the 45-year-old, who had used the corrosive substance before, opened the bag ‘as normal’.

But unbeknownst to her, a tiny drop of the grease-destroying liquid got on her face.

Ms Prendergast, a hotel worker, used a tea towel to wipe her cheek when it began to itch, inadvertently spreading the harsh alkaline chemicals — which can burn the skin.

By the time her daughter had got back from school, the side of her face had turned ‘black’.

Recalling her ordeal in 2019, Ms Prendergast said: ‘I went into the bathroom and looked at my face and just started to throw water at myself.’

She rushed to A&E at University Hospital Galway, where doctors gave her antibiotics and salt water to prevent the wound becoming infected.

Doctors referred her to the plastic surgery team, who cut away a piece of her cheek that was ravaged by the burn. 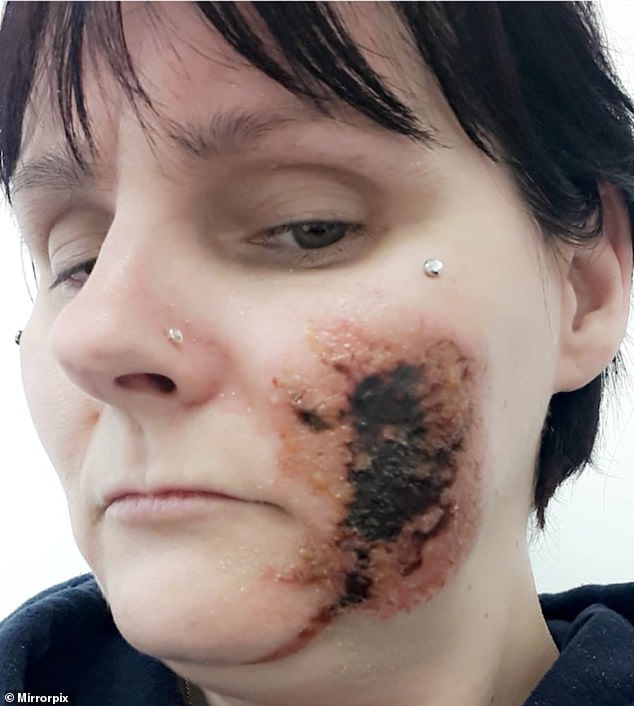 Maura Prendergast, from Ireland, was left with a hole in her cheek after accidentally dabbing oven cleaner on her face 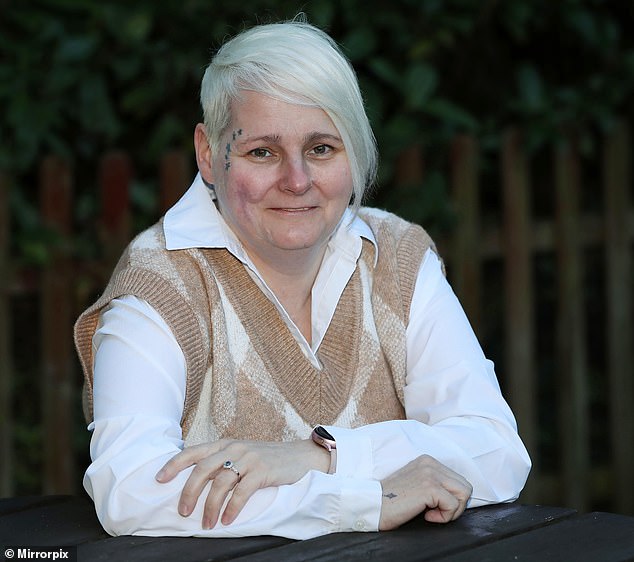 Ms Prendergast, a hotel worker, used a tea towel to wipe her cheek when it began to itch, inadvertently spreading the harsh alkaline chemicals — which can burn the skin 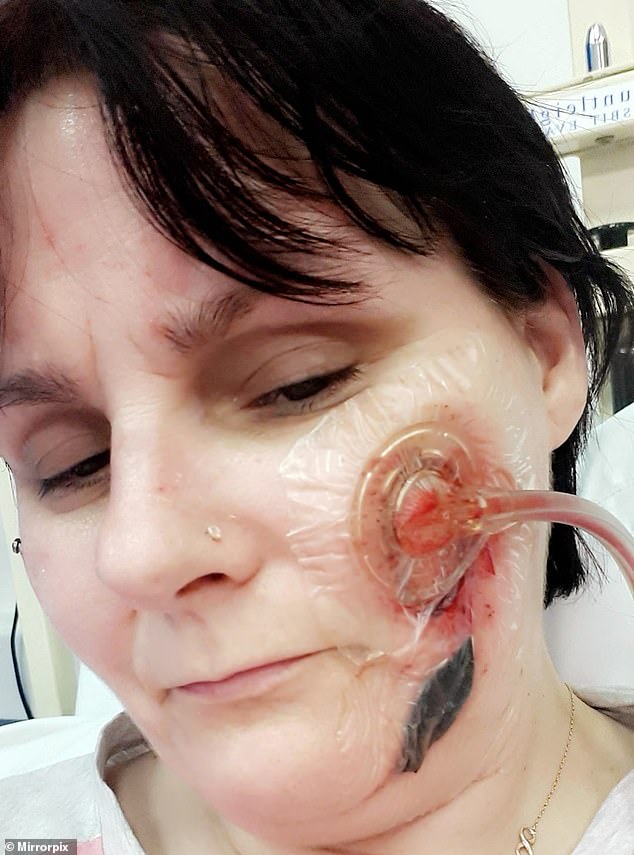 She has had multiple skin grafts, several of which have failed, and was forced to wear a vac pack (pictured) on her face to hold the wound together so it can heal after one of the ops 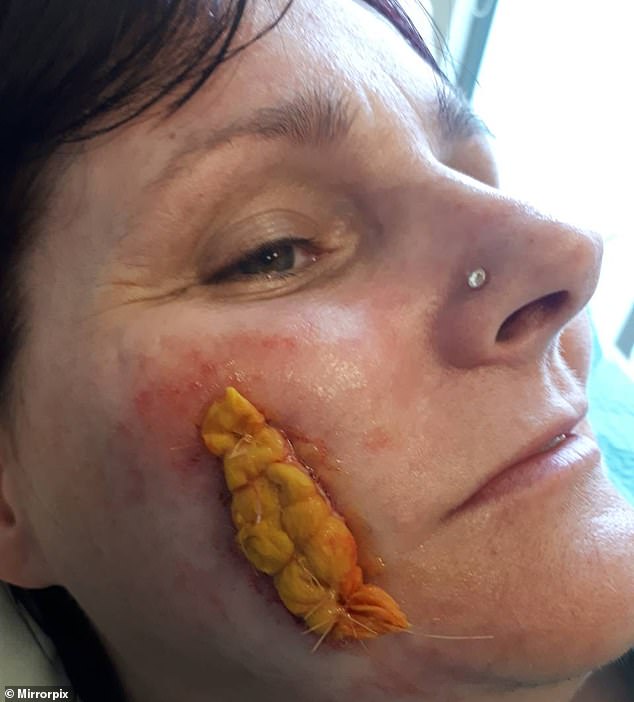 Pictured: The area that was burned became infected after one of Ms Prendergast’s skin grafts failed

A chemical burn is the irritation and destruction of human tissue caused by exposure to a chemical.

Many cases occur due to accidental misuse of hair, skin and nail care products.

Most chemical burns are caused by strong acids that kill cells, which can lead to scarring and disabilities.

The extent of tissue damage depends on the strength of the chemical, the site of contact, whether it was swallowed, whether skin was intact and how long it was left on for.

Minor chemical burns that affect a small area of skin can often be treated by thoroughly washing the affected area with water.

But that wasn’t the end of her nightmare.

Over the last three-and-a-half years, she has had 10 surgeries, including an operation to close the wound using fat from her stomach.

She has had multiple skin grafts, several of which have failed, and was forced to wear a vac pack on her face to hold the wound together so it can heal after one of the ops.

Now, Ms Prendergast is calling on Oven Pride to ensure it provide face masks with its products.

McBride, the company which owns the cleaner, provides gloves with its oven cleaner and advises customers wear masks.

She told the Daily Mirror: ‘Oven Pride is still on sale.

‘And it says on the box to wear gloves and a mask and they give you gloves in the box, so why not put a mask in, too.

‘This was before Covid so people didn’t have masks then, now we all have them, so there’s no excuse.

‘It shouldn’t have been able to happen to me and if there had been a mask in the box it wouldn’t.

‘I just want to warn others to protect themselves so they do not have this happen to them.’

Oven Pride includes a 500ml bottle of liquid, a bag to place oven wracks in, one set of gloves and an instruction leaflet.

The liquid contains sodium hydroxide, a dangerous chemical also known as lye, that causes serious burns and permanent damage if it comes into contact with skin.

Severe chemical burns, like Ms Prendergast’s, can require grafts, where the affected area is removed and replaced with a section of healthy skin taken from another part of the body.

Speaking about the burn, Ms Prendergast said she did not panic when her face first went black, instead using her first aid training to start rinsing the wound.

But over the years, her treatment wore her down, with her asking her family at one point to ‘just take her home to die’.

When wearing the vac pack for 10 weeks, she said would not leave the house because she did not want people to see her, adding: ‘I’ve always felt like I’m ugly anyway.’

She got five stars tattooed close to her right eye on the side of her face that has been scarred.

The tattoos gave her a way of taking back control, after her piercings in the area were rejected following her surgeries, she said.

Now, she feels like she has a ‘second chance at life’, after getting engaged and hopes her nightmare can help prevent others being burned in the same way.