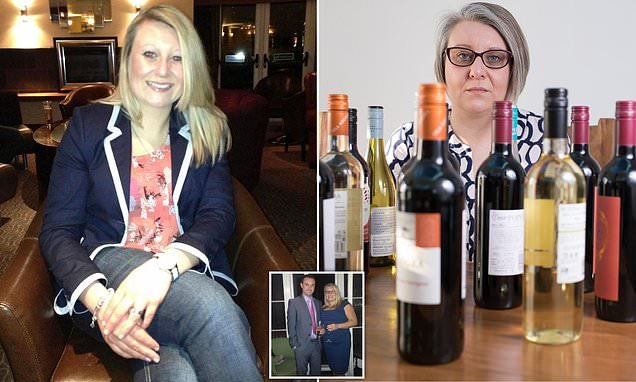 Mother, 36, reveals she had ‘no choice’ but to drink 15 BOTTLES of wine a week to cope with the agony of her vaginal mesh

A mother-of-two claims the agony of a vaginal mesh led her to binge drink up to 15 bottles of wine a week.

Emma Hawksworth, 36, of Southport, Merseyside, opted to have the mesh after the traumatic birth of her daughter Sophie, now nine, resulted in her suffering internal prolapses.

But just weeks after it was implanted, Mrs Hawksworth claims she began suffering from pain, headaches, fatigue and bowel issues.

And 18 months later, she battled both shingles and two breast abscesses, as well as an allergy to milk, beef and wheat – all of which she blames on her vaginal mesh.

With painkillers having no effect, Mrs Hawksworth ‘was left with no choice’ but to self-medicate with multiple bottles of wine a night, setting the self-employed cleaner back £300 a month.

Five years since the operation, Mrs Hawksworth is desperate to have the synthetic mesh removed.

After her husband Matt, 38, threatened to leave unless she cut back on alcohol, Mrs Hawksworth claims she ‘barely drinks now’. 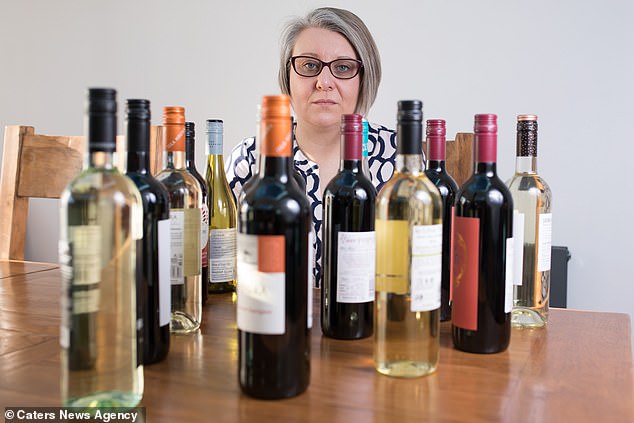 Emma Hawksworth (pictured) would get through up to 15 bottles of wine a week to self-medicate the agony of her vaginal mesh, which was fitted to help her internal prolapses 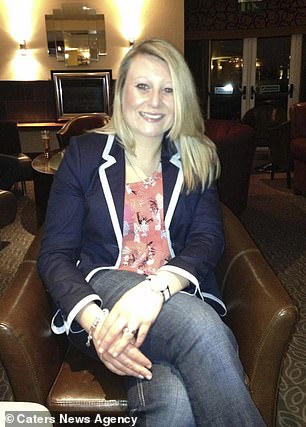 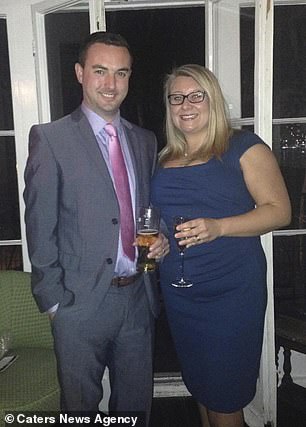 Mrs Hawksworth (pictured left before the surgery) claims she began suffering from pain, headaches, fatigue and bowel issues just weeks after the mesh was fitted. Her husband Matt (pictured right together) has given her an ultimatum to curb her drinking habit

Speaking of her drinking problem, Mrs Hawksworth said: ‘I was left with no choice but to drink up to three bottles of wine per night to cope with the pain and stress.

‘It all started around 18 months after the mesh was inserted and I was sick of being fobbed off by different consultants.’

Different doctors dismissed her symptoms as everything from IBS and depression to carpel tunnel and nerve damage.

‘I was just being constantly bounced around and it all got on top of me – having a drink would help me sleep at night because it would forget about the pain,’ Mrs Hawksworth said.

Although her husband has been supportive throughout the ordeal, even he decided enough was enough.

‘[He] gave me an ultimatum to sort things because it was becoming a strain on our marriage,’ Mrs Hawksworth said. 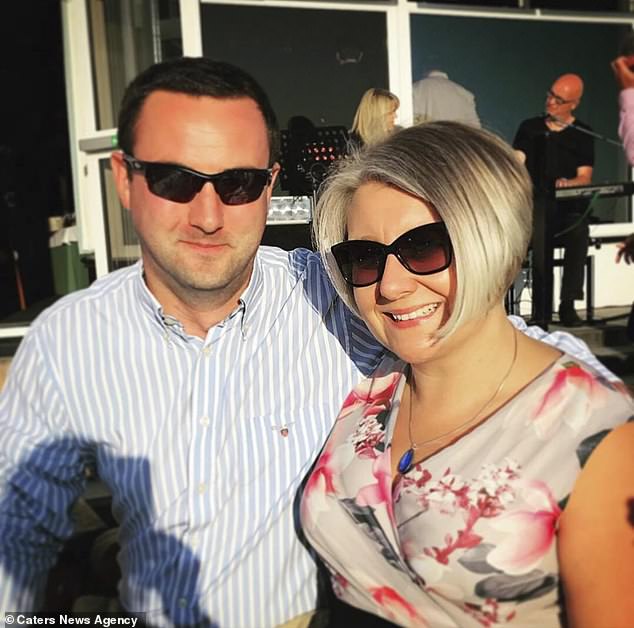 Mrs Hawksworth had a traumatic delivery with her first child Sophie, now nine. After surgery to temporary fix her ‘internal damage’, she knew she would need an additional procedure later. When the couple (pictured) decided not to have any more children, she opted for the mesh

Mrs Hawksworth required corrective surgery following the birth of Sophie, who was stuck in the birth canal for two hours.

This caused a lot of internal damage and ‘stretching’, with doctors performing ‘basic repair’ immediately after the birth.

But they warned this was just a temporary solution and she would need more surgery later on.

‘I needed cystocele front wall repair – where they remove part of my vaginal wall to strengthen it – following the birth of my first child,’ Mrs Hawksworth said.

‘They said they would ‘sling up’ my bladder as well as the procedure to treat urinary incontinence.

‘This procedure was quite complicated as it involved using my internal muscles and tissue to be used as the sling.’

Mr and Mrs Hawksworth went on to have a second child – Sam, now six – before deciding not to have anymore.

‘After having Sam I told my consultant that we were happy that we had completed our family and could I have some information about this repair that I needed,’ she said.

‘I then went through several internal examinations and tests to determine what needed to be done, which in this case was using pelvic mesh.’

Mrs Hawksworth claims medics would not fit the mesh until she had finished having children in case it failed.

‘If I had another baby, the weight of the pregnancy and the force of labour would put too much strain on the stitching of the vaginal wall, and could cause it to prolapse again,’ she said.

Mrs Hawksworth described the surgeon as a ‘right bully’, who pressured her into having her mesh fitted. 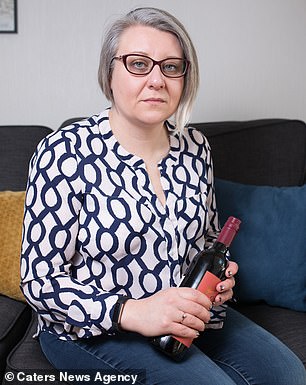 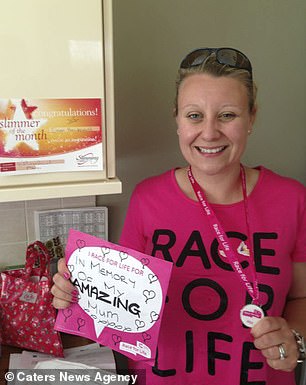 With painkillers having no effect, Mrs Hawksworth (left) claims she had ‘no choice’ but to drink to ease her discomfort and stress. Pictured right after running race for life before the surgery, the cleaner now struggles to make it to her medical appointments due to her agony

Mrs Hawksworth claims the constant agony of her mesh implant forced her to quit her job as a letting agent.

‘My work and home life are massively affected by everything that has happened to me,’ she said.

‘I’ve had shingles twice in the last 18 months, I’ve also had two breast abscesses – one which had to be removed surgically along with all my milk ducts.

‘And I now have food allergies to milk, beef and wheat, which have resulted in two A&E admissions.

‘In short, I feel rubbish all the time – I also put on three and a half stone (49lbs) after the operation and am really struggling to shift it, I’ve managed two stone (28lbs) so far but that’s taken me three years.’

Following many trips to different consultants, doctors have finally admitted her mesh may be partly to blame.

After waiting eight months just to get a referral, Mrs Hawksworth worries it may be years before the implant is removed.

While she waits, Mrs Hawksworth has joined a campaign led by the hundreds of women in the UK who have struggled with health issues following mesh surgery and are campaigning to Parliament to ‘sling the mesh’.

‘I know I’m not the only woman who’s going through this pain,’ she said.

‘I joined a group of Facebook and all the women have the same symptoms as me, making it obvious the mesh is the cause.

‘I’ve looked into going private but the prices are unreal and the best recommended private surgeon is based in London – I struggle with the trip from Southport to Manchester for my appointments, never mind down to London.’

WHAT ARE VAGINAL MESH IMPLANTS? THE CONTROVERSIAL DEVICES THAT HAVE BEEN COMPARED TO THALIDOMIDE

WHAT ARE VAGINAL MESH IMPLANTS?

Usually made from synthetic polypropylene, a type of plastic, the implants are intended to repair damaged or weakened tissue in the vagina wall.

Other fabrics include polyester, human tissue and absorbable synthetic materials.

Some women report severe and constant abdominal and vaginal pain after the surgery. In some, the pain is so severe they are unable to have sex.

Infections, bleeding and even organ erosion has also been reported.

WHAT ARE THE DIFFERENT TYPES OF MESH?

Mini-sling: This implant is embedded with a metallic inserter. It sits close to the mid-section of a woman’s urethra. The use of an inserter is thought to lower the risk of cutting during the procedure.

TVT sling: Such a sling is held in place by the patient’s body. It is inserted with a plastic tape by cutting the vagina and making two incisions in the abdomen. The mesh sits beneath the urethra.

TVTO sling: Inserted through the groin and sits under the urethra. This sling was intended to prevent bladder perforation.

TOT sling: Involves forming a ‘hammock’ of fibrous tissue in the urethra. Surgeons often claim this form of implant gives them the most control during implantation.

Kath Samson, a journalist, is the founder of Sling The Mesh

HOW MANY WOMEN SUFFER?

According to the NHS and MHRA, the risk of vaginal mesh pain after an implant is between one and three per cent.

But a study by Case Western Reserve University found that up to 42 per cent of patients experience complications.

Of which, 77 per cent report severe pain and 30 per cent claim to have a lost or reduced sex life.

Urinary infections have been reported in around 22 per cent of cases, while bladder perforation occurs in up to 31 per cent of incidences.

Critics of the implants say trials confirming their supposed safety have been small or conducted in animals, who are unable to describe pain or a loss of sex life.

She warned that they are not obligated to report such complications anyway, and as a result, less than 40 per cent of surgeons do.