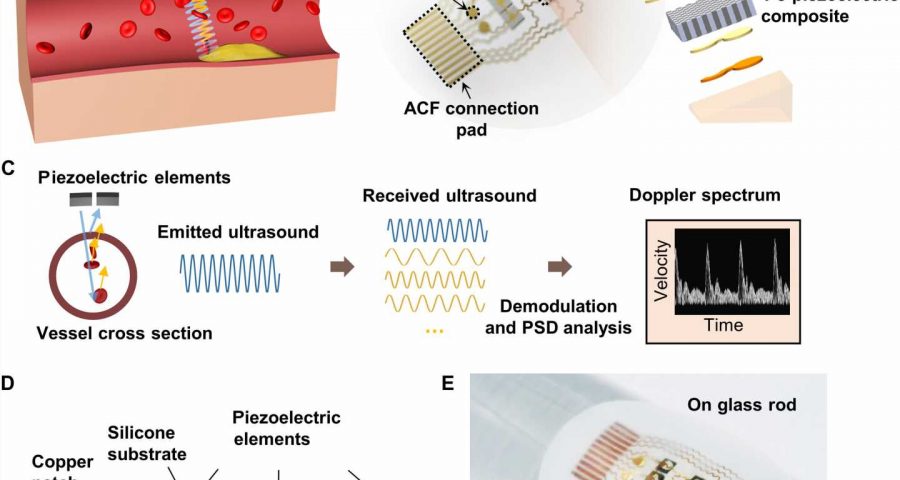 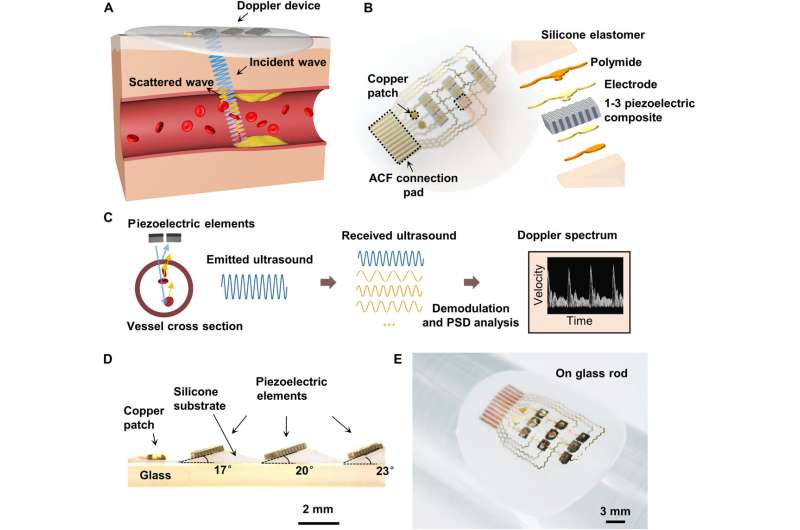 Clinicians assess variations of the cardiovascular system by examining variations in blood flow in time and space. Blood flow in arteries can vary in a pulsatile manner due to intermittent heart pumping where the flow velocity near the blood vessel wall is lower than at the center of a vessel. Vessel characteristics including their dimensions and compliance have an impact on the hemodynamics occurring within them. Flow velocity parameters can also determine thrombus, artery stenosis, hardening occlusion and other diseases. Continuously monitoring the blood flow of patients is therefore necessary in clinical practice and healthcare. In present healthcare systems, ultrasound equipment including the handheld ultrasound device are incorporated to measure blood flow. In this work, Wang et al. presented a continuous-wave Doppler ultrasound device for real-time, continuous monitoring of absolute blood flow. The array design and dual-beam ultrasound Doppler method allowed them to obtain absolute velocity and eliminate the need for calibration. Wang et al. demonstrated the device on ultrasound phantoms and on human arteries to display its excellent capacity to monitor blood flow velocity.

Ultrasonic measurements of blood flow velocity were based on the Doppler effect with piezoelectric transducers that transmit ultrasound waves with a frequency into the skin. When moving scatterers such as red blood cells produce an echo, the received frequency deviated from the transmitted frequency to form a Doppler shift. This usually depends on the speed of sound, flow velocity and the known Doppler angle between the axis of the ultrasound beam and the direction of flow looking towards the transducer. The Doppler signal of blood flow indicated a mixture of many single-frequency signals of scatterers with different velocities in the blood flow, with a corresponding amplitude, frequency and phase. The team used a continuous wave Doppler in the device where one transducer continuously transmitted an ultrasound beam, and an adjacent transducer received the scattered echoes from the blood. The device offered simple signal processing and easy functionality, compared to pulse-wave doppler devices. To design the flexible device, Wang et al. addressed a few key limitations by using an angled transducer array to form opaque ultrasound beams to determine relative motion between the ultrasound beam and scatterers. They then determined the Doppler angle, by using a dual-beam ultrasound Doppler method (known as DBUD method) to determine the inclination angle. The transducer showed excellent beam directivity. The team determined the pulse response and frequency response of the transducer and noted a stable central frequency approximating 5 MHz. 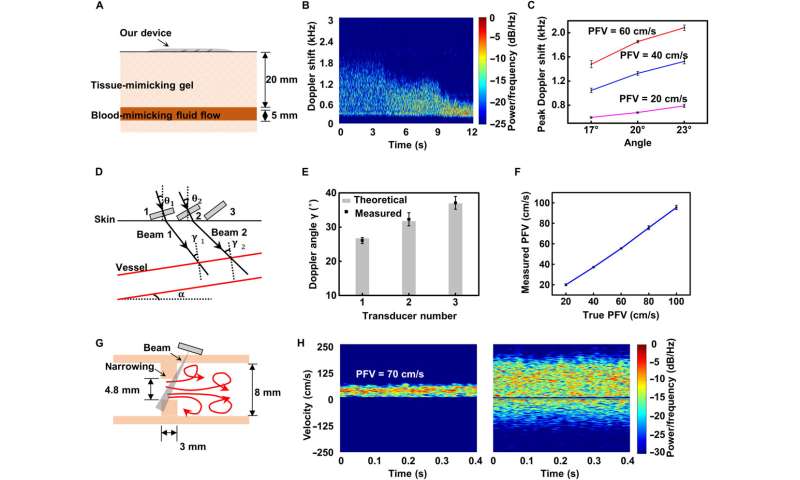 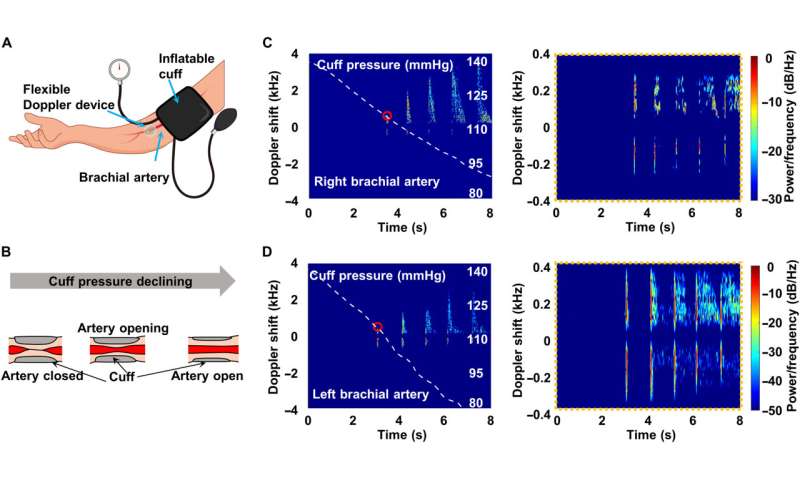 Characterizing the device and understanding the DBUD method

The team next tested the device on a standard ultrasound phantom designed to mimic tissue material and blood fluid that simulated the acoustic characteristics of real human tissues and fluid. Wang et al. measured the Doppler spectrum of the blood-mimicking flow under different velocities and adjusted the peak flow velocity accordingly. With increasing inclination angle and velocity, the peak frequency shift also increased. To accurately measure the blood flow velocity using the Doppler effect, the researchers had to know the angle between the direction of flow and the ultrasound beam. The angle between the direction of the vessel and the skin surface is, however, typically uncertain; therefore, to overcome this, Wang et al. used piezoelectric transducer arrays with different inclination angles to qualitatively measure the flow velocity. They derived the principle of this method as DBUD (dual-beam ultrasound Doppler method) and determined a unique solution of Doppler angles, flow velocity and the inclination angle of the vessel. The team then calculated the Doppler angle and measured the absolute velocity without calibration.

Atherosclerosis can cause artery narrowing (stenosis), which leads to increased resistance to blood flow and artery occlusion. Blood flow through arteries is generally laminar, but it can rapidly increase when encountering a stenosis to cause turbulence beyond the narrowing. By developing an in vitro narrowing simulator, Wang et al. simulated narrowing to capture blood flow characteristics under different conditions. The team next conducted spectrum analysis to obtain quantitative information for blood vessels. When compared with constant flow, blood flow was pulsatile and produced a jumble of Doppler frequency shifts. Wang et al. obtained an accurate measurement of the carotid blood flow velocity and compared it with the result of a commercial ultrasound machine. The carotid artery is associated with cerebral blood flow and has a typical spectrum of five feature points. Wang et al. validated the outcome relative to commercial ultrasound machines and displayed the measurements in the form of Doppler audio in the audible range as well. The device continuously represented changes in vascular resistance to prove its role in capturing the characteristics of blood flow.