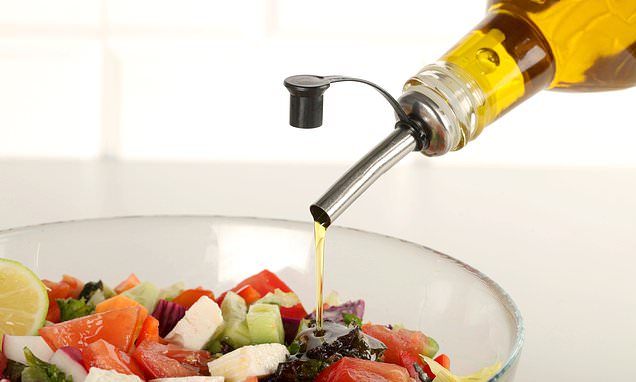 Mothers-to-be who follow a Mediterranean diet are less likely to suffer gestational diabetes, a study has revealed.

The diet, rich in healthy fats and low in sugar and processed meat, also keeps the weight from creeping on during pregnancy.

Pregnant women following the diet reported that eating more nuts and drizzling olive oil on meals made them feel less bloated and happier.

However, scientists found the Mediterranean diet during pregnancy did not protect against pregnancy or neonatal complications. 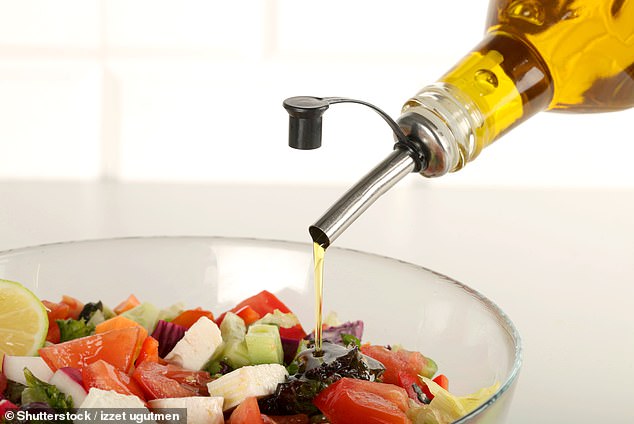 Mothers-to-be who follow a Mediterranean diet rich in olive oil are less likely to suffer gestational diabetes and gain weight, a study has revealed

The study, led by teams at Queen Mary University of London and the University of Warwick, involved 1,252 women at five UK maternity units.

The women were at risk of metabolic disorders, including obesity and chronic high blood pressure.

They were randomised to either follow a diet in line with UK national guidelines, or adopt a Mediterranean-style diet.

The former group received general antenatal care, while the latter received extra attention to ensure they followed the diet.

Women on the Mediterranean diet were given complimentary mixed nuts and a litre of extra virgin olive oil to cook with every fortnight.

The study, published in the journal PLOS Medicine and funded by Barts Charity, showed that having a Mediterranean diet led to a 35 per cent lower risk of developing diabetes in pregnancy.

Consuming more fruit and fish, and fewer sugary drinks and snacks, are the most important aspects of a Mediterranean diet.

Gestational diabetes is high blood sugar during pregnancy and puts the mother at an increased risk of developing type 2 diabetes in the future. It can also lead to problems such as a premature birth.

Professor Shakila Thangaratinam from Queen Mary University of London said: ‘This is the first study to show that pregnant women at high risk of complications may benefit from a Mediterranean-style diet to reduce their weight gain and risk of gestational diabetes.

‘Implementing this diet seems to be effective and acceptable to women.

‘Current national dietary guidelines do not include the key components of the Mediterranean-style diet in their recommendations.

‘Women who are at risk of gestational diabetes should be encouraged to take action early on in pregnancy.’

The participants were from a range of ethnicities and lived in urban areas.

Dr Bassel Wattar from the University of Warwick and Queen Mary University of London said: ‘Now we know that pregnant women from an inner city, high-risk, multi-ethnic population are able to adapt their diet to a Mediterranean-style, and that this can bring them important benefits.’

One in four mothers enter pregnancy obese, with chronic hypertension or raised cholesterol.

These can lead to pregnancy complications, such as pre-eclampsia, or the long-term risk of diabetes and cardiovascular complications for both the mother and baby.

Despite the improvements in gestational diabetes and pregnancy weight gain, there was no improvement of overall adverse maternal and offspring complications.

These include high blood pressure, pre-eclampsia, stillbirth, a foetus small for gestational age or admission to a neonatal care unit.

The participants in the Mediterranean-style diet group reported better overall quality of life than those in the control group and reduced bloating.

But there was no effect on other symptoms such as nausea, vomiting or indigestion.

The results mirror that of a Spanish study involving 874 pregnant women on a Mediterranean diet, which found a reduction in gestational diabetes by 33 per cent, but no effect on other outcomes.