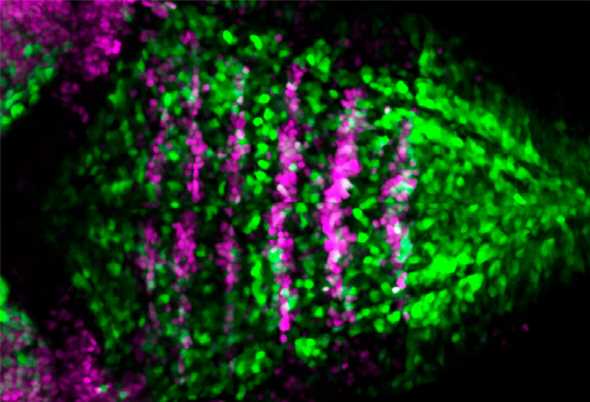 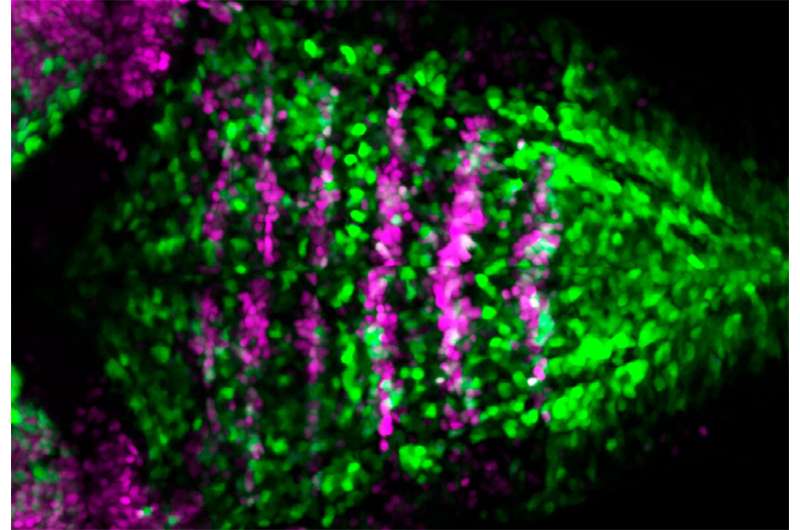 A new study by the Neuronal Dynamics Research Group at Universitat Pompeu Fabra in Barcelona (UPF) has elucidated the cellular and molecular mechanisms that regulate the balance between the differentiation of neurons and the maintenance of progenitor cells during the construction of the embryonic brain. The study, conducted in the zebrafish model, has been published in the journal Cell Reports.

In vertebrates, the central nervous system is formed from an embryonic structure divided into three vesicles of the brain and the spinal cord. The hindmost vesicle is called the rhombencephalus and is preserved in all vertebrates. It will result in essential adult derivates for the regulation of breathing, heart rate, etc. During embryonic development, the posterior brain is subdivided into seven segments, called rhombomeres.

During embryonic development, coordination takes place between the proliferation of progenitor stem cells responsible for the organ’s growth and its differentiation into neurons. For this reason, this ability to give rise to neurons is localized to specific sites.

Now, the group led by Cristina Pujades at the UPF Department of Medicine and Life Sciences (MELIS) has investigated how rhombomeric boundary cells give rise to neurons while maintaining a proliferative reservoir of progenitor stem cells. “In the initial stages of embryo formation it is important to maintain a number of stem cells that allow the formation of neurons later on,” states Covadonga F. Hevia, first author of the study.

Cristina Pujades, study coordinator, notes, “During brain formation, the processes of proliferation and differentiation must be maintained, they must be regulated very precisely, and each step must occur at the right time. This coordination is crucial because any problems during the process can result in neural disorders.”

They do this by asymmetric divisions; in other words, when a progenitor cell divides, it produces a daughter cell that becomes a neuron and stops dividing, and another daughter cell that remains a progenitor. This allows retention of the stem cell reservoir over time. “In this work we have discovered that the asymmetric cell division triggered by the so-called Notch signaling pathway allows rhombomeric boundary cells to form neurons while maintaining stem cells for later on,” Pujades adds.