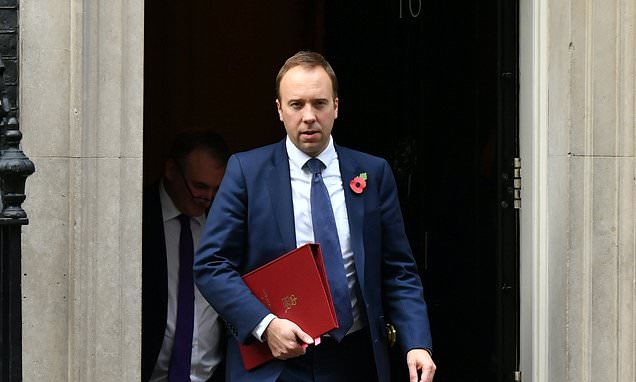 ‘No-one has the right to choose their doctor’s skin colour’: Health Secretary Matt Hancock tells NHS staff to stand up to racist patients

NHS staff should stand up to racist patients if they are abusive, the Health Secretary Matt Hancock has said.

In a letter to health workers he said ‘no one is entitled to choose the colour of the skin’ of someone who is treating them.

And he told doctors, nurses and other health staff that if they see or experience abuse ‘do not accept it… do not ignore it… do not stand for it’.

Mr Hancock’s comments come after a surgeon interviewed in an ITV investigation revealed one patient asked him ‘can I have a white doctor?’.

Mr Radhakrishna Shanbhag’s ordeal sparked uproar as statistics revealed a shocking 145 per cent rise in racist attacks on NHS staff over the past five years. 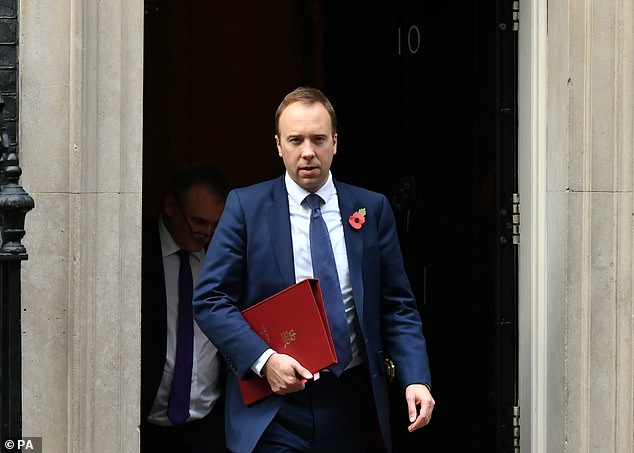 In his letter to NHS workers, which was seen by the Health Service Journal, Mr Hancock said: ‘I want to send a clear message, from the very top of our health and care system, with the strong support of the entire national leadership of the NHS: this sort of abuse is unacceptable and we will not tolerate it.

‘If you face abuse, do not accept it. If you see a colleague being abused, do not ignore it. If you know of an employee facing this, do not stand for it.’

He added: ‘No one is entitled to choose the colour of the skin of the person giving [them] healthcare.

‘Staff of all backgrounds should rightfully expect to work in an NHS that exhibits a healthy, inclusive, and compassionate culture: a culture where abuse and violence have no part.’

It was not clear whether Mr Hancock suggested refusing to treat patients who were racially abusive or simply reporting them to more senior staff.

In ITV News’s investigation the broadcaster revealed the number of racist attacks recorded in the NHS in England rose from 589 in 2013 to 1,448 in 2018.

Figures in the most recent NHS staff survey showed an average of 6.4 per cent of NHS staff – more than one in every 20 – said they had personally experienced discrimination from patients, their relatives or members of the public.

NEARLY HALF OF NHS NURSES ‘HAVE BEEN RACIALLY ABUSED’

Nearly half of nurses said they have been victims of racial discrimination over the past year in a survey by the Nursing Times.

The industry magazine asked 1,000 nurses whether they had been treated unjustly and 48 per cent of them said they had.

Half worked in an NHS hospital and 80 per cent lived in England, as opposed to England or Wales.

In nearly a fifth of cases (19 per cent), patients or their families were behind the vicious verbal attacks.

One nurse who didn’t want to be named said the abuse has got worse since Brexit, with patients reportedly calling staff ‘the N word’ and saying ‘go back to Africa’.

Worst among these were ambulance staff, among whom 13.2 per cent – one in eight – said they had.

Mr Shanbhag, an Indian trauma surgeon working in Blackpool, has worked in the English health service for 20 years.

In the ITV interview he said he asked one of his patients if they had any questions before an operation.

In response they said: ‘Can I have a white doctor do the operation?’

Mr Shanbhag added: ‘I was devastated, I said, “God at this stage in my career I have to answer that question”.

‘It made me reconsider my position in the NHS, because I’m thinking do I want to put up with this?’

There have also been reports of patients telling staff from overseas to ‘go home’ and using racial slurs to address them.

Mr Hancock said staff must be made to feel confident that their bosses would back them up if they stood up to racist patients.

He added in the letter: ‘Abuse of any member of NHS staff is completely unacceptable. It is absolutely appalling that many of these incidents are racially motivated.

‘Like me, you may have seen the shocking testimony of Dr Radhakrishna Shanbhag… In an exceptionally moving interview, he described the racial abuse that he had been subjected to whilst working as a part of the NHS.

‘Racial abuse that made him feel worthless. Abuse so foul that it made him reconsider his position in the NHS.

‘Especially troubling is the feeling among some staff that they need to accept this humiliation because they can’t be sure they will be backed up if they challenge it.’