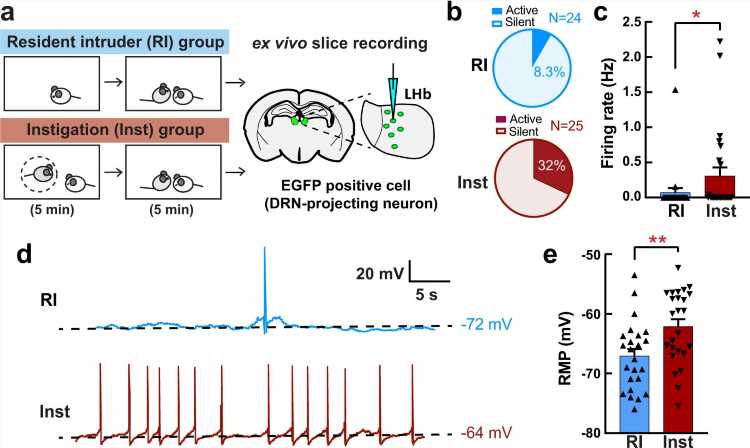 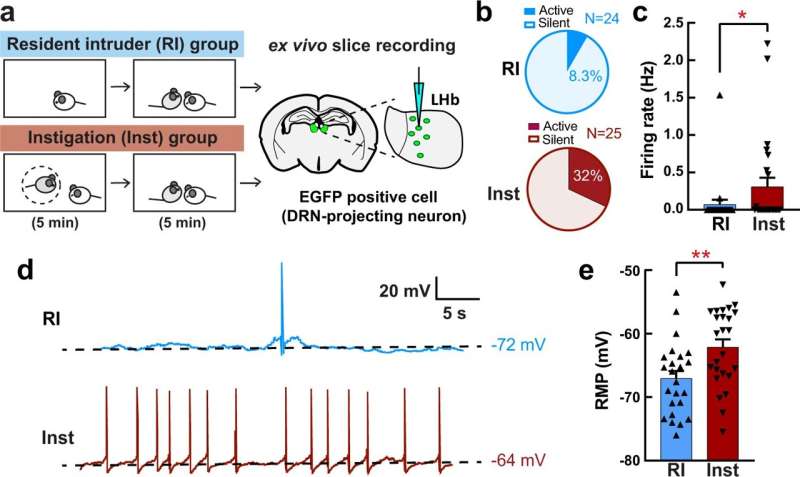 When male animals spend time around other males of the same species, subsequent aggressive behavior tends to be amplified—this type of priming is known as social instigation. However, the pathway in the brain that leads to this increased aggression was, until recently, relatively unknown. In a study published in Nature Communications, researchers from the University of Tsukuba have revealed that the lateral habenula, a small and relatively primitive region located deep within the brain, is important for this behavior in mice.

Aggressive behavior, especially between males, is important in many animal species and can be promoted in a number of different ways, including by social instigation. Although this behavioral effect is well characterized, the brain pathway that is responsible for it is less understood. The dorsal raphe nucleus is a brain region that controls aggressive behaviors, and it receives glutamate (a molecule that acts as a signal between brain cells) when social instigation occurs. However, the source of this glutamate was a mystery. Researchers from the University of Tsukuba decided to address this gap in the knowledge.

“Many different brain regions release glutamate into the dorsal raphe nucleus,” explains lead author of the study Professor Aki Takahashi. “Because our initial experiments suggested that glutamate release from the lateral habenula might be responsible for aggression induced by social instigation, we conducted more experiments to see if this was the case.”

The research team used two different techniques to block communication between the lateral habenula and dorsal raphe nucleus in mice, and found that this also blocked the increased aggression caused by social instigation—but it didn’t affect normal levels of aggression, suggesting that this pathway is not important for aggressive behavior in general.

“We then wanted to look at the pathway beyond the dorsal nucleus,” says Professor Takahashi. “We found that social instigation caused signals to travel through the brain from the lateral habenula to the dorsal raphe nucleus and then on to the ventral tegmental area—a highly connected region in the midbrain—leading to heightened aggression.”