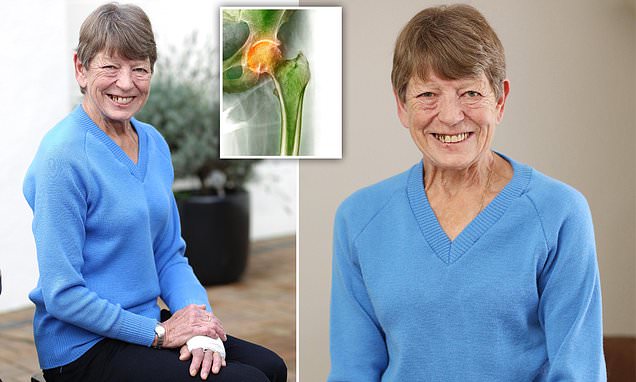 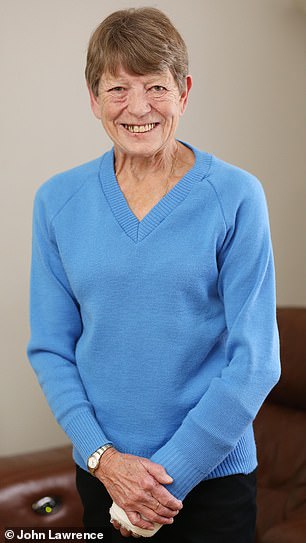 Lynn Woolley, 67, a cleaner and mother of three from Portsmouth, was one of the first to have a new pioneering device fitted

A recent study revealed a new ‘expanding’ implant to fix crumbling hip joints has the lowest failure rate of any such implant.

Lynn Woolley, 67, a cleaner and mother of three from Portsmouth, was one of the first to have the pioneering device, as she tells Rachel Ellis.

Eighteen months ago, I was at home when I fell. I have blood pressure problems so am sometimes a bit unsteady on my feet.

Unfortunately, it was a concrete kitchen floor and I fell awkwardly, leaving my left leg and hip sticking out at a funny angle.

At hospital, an X-ray showed I had fractured my left hip and needed an operation. Without surgery, I probably wouldn’t have been able to walk again.

I was shown a diagram of the traditional implant, which holds the fractured hip together with a large screw through the neck and head of the thigh bone.

But I was told I could be part of a trial for a new implant called the X-Bolt that promises to make the repair more stable because parts of it expand into the fractured bone.

During my consultation, I was also told I had osteoporosis, where bones lose their strength, which explains why my hip joint fractured when I fell. I now take medication for that.

After the X-Bolt operation, I was on strong painkillers and was in hospital for five days but was up and about straight away.

I was on crutches for eight to nine weeks and was driving again after about six weeks.

I have a 5in scar down the side of my left leg and, at times, I do still get some niggles with my hip. It can be difficult bending over to put my socks on, for example, but not painful. Overall, though, it feels good. I’m delighted. 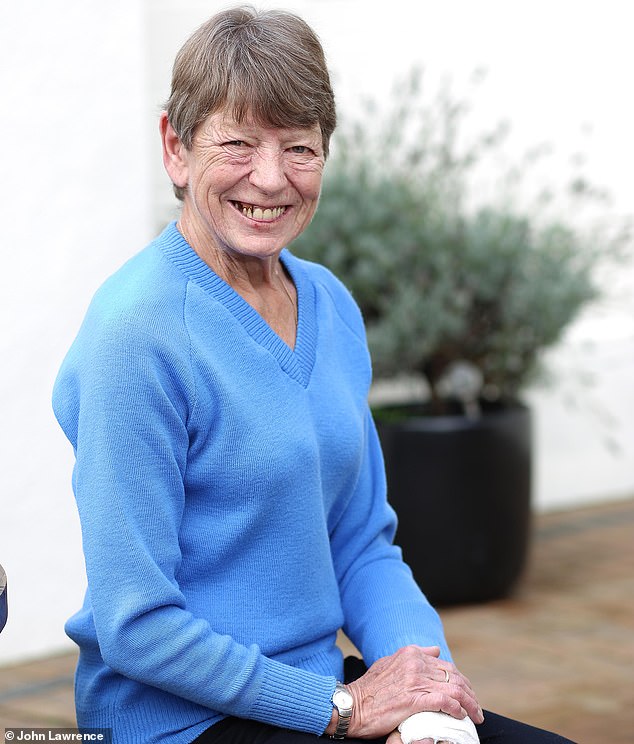 Ms Woolley said: ‘I was told I could be part of a trial for a new implant called the X-Bolt that promises to make the repair more stable because parts of it expand into the fractured bone’

HIP fractures are extremely common, affecting 75,000 people a year in the UK, but can be difficult to treat because they tend to occur in elderly, frail patients.

One in 20 operations to repair the fracture fail, either because the device fails or the patient gets an infection in the joint.

What are the risks?

We try to operate on hip fracture patients within 36 hours, because lying in bed can cause pressure sores and infections, which can be life-threatening.

By operating promptly — in Lynn’s case after just 12 hours — death rates within 30 days of surgery have been steadily reducing and are now down to around 6 per cent (compared with around 8 per cent a decade ago). Since the 1950s, hip fractures — cracks or breaks in the top of the thigh bone close to the hip joint — have been fixed using a device known as a sliding hip screw. Most hip fractures are treated in this way, though some will have a hip replacement, where the entire head of the thigh bone is replaced.

The sliding hip screw involves placing a plate along the outer thigh bone which is screwed into position, and then a larger 4in screw is passed through the neck and head of the thigh bone to hold the fracture together.

Although this works very well, the hope is this new device might be more stable, with a lower failure rate and better function for patients afterwards.

I was the principle investigator at one of ten hospitals taking part in the World Hip Trauma Evaluation 4 (WHITE4) X-Bolt trial last year — the largest ever randomised controlled trial to look at hip fracture devices.

The X-Bolt device secures the fractured hip using ‘wings’ that expand in the femoral head (the ball part of the ball-and-socket joint) much like an expandable wall plug. 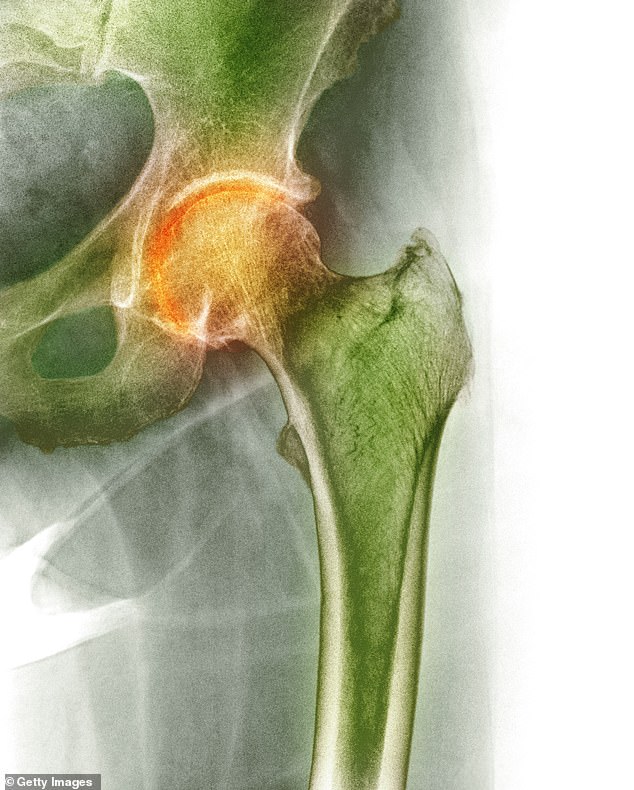 The X-Bolt device secures the fractured hip using ‘wings’ that expand in the femoral head (the ball part of the ball-and-socket joint) much like an expandable wall plug. Stock picture of an arthritic hip

The theory is this provides greater anchorage, particularly in bones which have become soft and spongey through osteoporosis. It’s like the normal screw but with added wings for stability.

The 20 to 45-minute operation is carried out under general or local anaesthetic, depending on the fitness of the patient. The operation itself is performed in largely the same way as the traditional sliding hip screw procedure.

Mature well… How health gets better with age

We catch fewer colds as we age, and by the time we reach 60 we typically come down with just one a year. This compares with the average annual toll of six to ten for a child.

Habits, from not washing their hands to not covering their mouths when they cough, put children at higher risk than adults who have better hygiene.

Yet this isn’t the only reason we have fewer colds as grown-ups. Each time the body is exposed to one of the viruses that causes the common cold, it develops antibodies to fight off that particular bug in future, meaning the older you get, the more cold viruses you are likely to be immune to.

However, with more than 200 different bugs behind the cold, you will likely not be entirely impervious to the sniffles. And eventually the cold strikes back.

‘While we do get fewer colds as we get older, maybe in our 70s and 80s, our immune system weakens and colds can progress to chest infections that may become more serious with age,’ says Professor Ron Eccles, founder of Cardiff University’s Common Cold Centre.

First, with the patient lying on their back, the injured leg is put into a special boot and suspended in the air to pull the hip into alignment. A 4 in incision is made on the outside of the injured thigh and the muscle is lifted to reach the femur (the thigh bone).

A guide wire is then passed (using X-rays as a guide) from the top of the thigh bone through the fracture to the centre of the femoral head. A channel is then made using a type of cutting tool called a reamer to prepare for the X-bolt device, which comes in different sizes to match the size of the patient’s hip. Once the device is in place, the wings inside the head of the femur expand.

A plate is then placed along the outer thigh bone which is screwed into position, and the skin is closed with sutures. By pulling the bones together, the device encourages the ends of the fracture to compress together and this both reduces pain and encourages the bone to heal.

After the operation, it is important that patients be out of bed the day after surgery to help their recovery and prevent chest infections and pressure sores.

Patients will be out of bed the day after surgery and need painkillers for two to three weeks.

More than 1,100 patients received either a standard sliding screw hip or the X-Bolt device as part of the WHITE4 trial. They were monitored for one year after surgery and asked about their quality of life and whether they have needed revision surgery.

Results, presented at the British Orthopaedic Association in September, showed X-Bolt had a cut-out rate — where the implant fails to anchor successfully in the ball of the hip joint, requiring revision surgery — of 0.8 per cent after a year.

This is claimed to be the lowest cut-out rate of any hip fracture device on the market. This is important because if the procedure fails, it requires a much bigger operation which has a 50 per cent mortality rate.

The study also showed X-Bolt was as effective as the traditional device at getting patients back on their feet.

These results are encouraging and follow a previous study, published in the Bone and Joint Journal in 2016, called WHITE1 which showed X-Bolt had a 0 per cent re-operation rate compared with 6 per cent for the sliding screw in people with hip fractures.

This device is now available on the NHS outside of the trial.