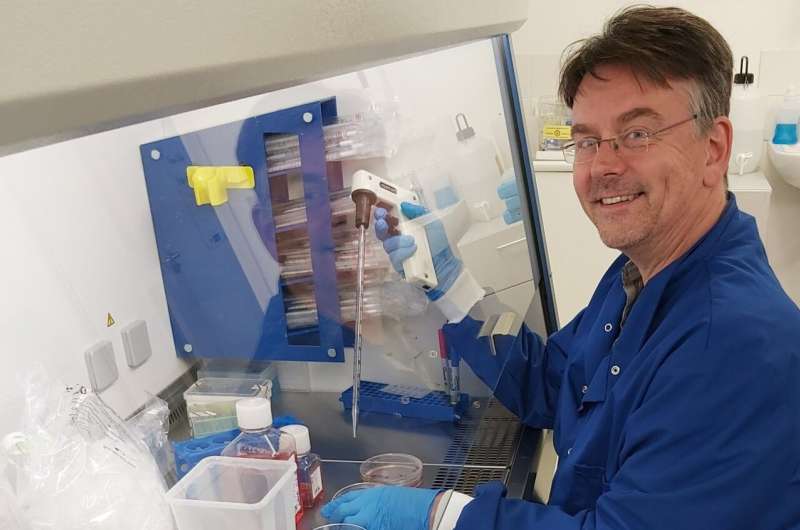 Researchers from the Medway School of Pharmacy (a partnership between the universities of Kent and Greenwich) have helped isolate the Lloviu virus (LLOV)—a close relative of Ebola virus—for the first time, highlighting the need for future research to ensure pandemic preparedness.

LLOV is part of the filovirus family—which includes the Ebola virus. While Ebola (and other filoviruses including the similarly pathogenic Marburg virus) have only occurred naturally in Africa, Lloviu has been discovered in Europe. The filovirus LLOV, was identified via its genetic material (RNA) in 2002 in Schreiber’s bats in Spain and was subsequently detected in bats in Hungary.

As a zoonotic virus—one which passes between animals and humans—LLOV is of interest to public health around the world due to our close relationship with animals in agriculture, as companions and in the natural environment. This is even more the case in recent years with the continued destruction and encroachment of natural habitats of many wild creatures. The World Health Organization states that “Zoonoses comprise a large percentage of all newly identified infectious diseases, as well as many existing ones.”

Dr. Simon Scott and Dr. Nigel Temperton from the Viral Pseudotye Unit (VPU) at Medway School of Pharmacy were part of a team led by Dr. Gábor Kemenesi from Pécs University/National Laboratory of Virology in Hungary. The VPU, including former Ph.D. student Dr. Martin Mayora-Neto, were involved in conducting all the antibody detection experiments using bat sera as part of the study, even before the virus itself was isolated. This isolation occurred in the Hungarian lab from the very last bat which tested LLOV positive.

Significantly the team have now discovered that Lloviu has the potential to both infect human cells and also to replicate. This raises concerns about potential widespread transmission in Europe and urges immediate pathogenicity and antiviral studies. The VPU work also revealed no antibody cross-reactivity between LLOV and Ebola, suggesting that existing Ebola vaccines may not protect against Lloviu, should it be transmitted to man.

Dr. Scott says that their “research is a smoking gun. It’s vital that we know both more about the distribution of this virus and that research is done in this area to assess the risks and to ensure we are prepared for potential epidemics and pandemics.”

From this research, it is clear that there is a considerable knowledge gap regarding the pathogenicity, animal hosts, and transmissibility of these newly discovered viruses. Funding from the British Academy has enabled Dr. Scott to create a consortium of European bat virologists, harnessing expertise in the field, from ecology to virology. The group are aiming to carry out essential further research across Europe into the risks of the Lloviu virus to humans, in addition to other families of viruses including coronavirus and lyssavirus (rabies) which have bats as hosts.