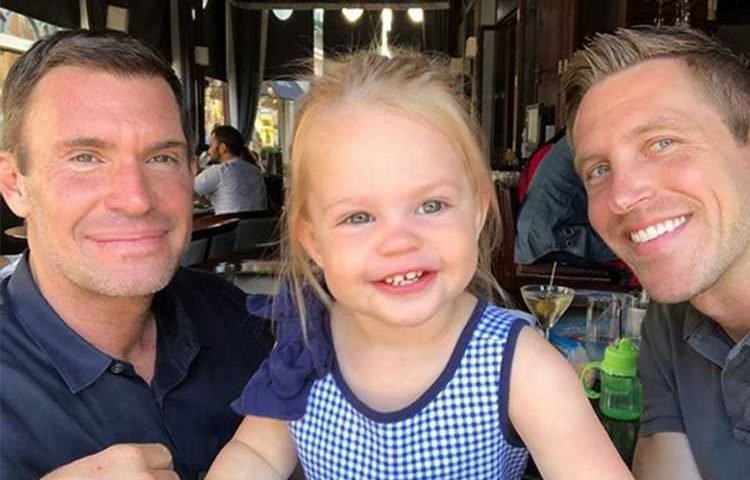 Jeff Lewis says he and his ex Gage Edward have hired lawyers in expectation of a custody battle over their two-year-old daughter Monroe.

During Tuesday’s episode of his SiriusXM radio show, Jeff Lewis Live, the Flipping Out star revealed that he and Edward, who split five monhts ago, had a three-hour session with their lawyers to discuss 50/50 custody of Monroe.

“I thought this meeting was going to be . . . about custody arrangements,” Lewis said. “We’re going to talk about financial support. We’re going to handle it all and move forward.”

Instead, he claims the pair and their lawyers spent the entire time discussing visitation for a single week “and it was never resolved.” Lewis also guesses that he and Edward spent between five and six thousand on the attorney session.

“Am I going to spend six thousand a week to talk about visitation? It was insane,” he adds.

Lewis also alleges that during the meeting, the attorneys had to separate he and Gage.

“He couldn’t keep it together,” Lewis says of Edward. “He was so angry and irrational that they had to move him to another conference room.”

RELATED: Gage Edward Reflects on Year of ‘Highs’ and ‘Lows’ on 35th Birthday After Split from Jeff Lewis

The Bravo star claims that this meeting came about after Edward’s attorney sent Lewis a letter asking for 50/50 custody of Monroe that would allow him to see her three-and-a-half days per week. Lewis first mentioned the letter on his radio show on June 13, when he said “I received a very nasty, nasty letter with a slew of mischaracterizations, mistruths, accusations and demands.”

“Unfortunately, during breakups you see people for who they really are,” he continued. “The problem is, when you hurt each other this way, it’s very hard to get through it. Sometimes people do such terrible things and say such terrible things.” He also alleged that the “events of the last five months” laid out by Edward’s attorney were “drastically different than what happened.”

In February, shortly after the former partners of ten years split, Lewis said he would “never use” Monroe as a bargaining chip in their relationship, but the situation between the exes has since deteriorated.

“Whatever happens, if there’s bumps in the road — and there could be, and this could get a little contentious — I just want to vow that I will never use our baby as a weapon,” he said on his radio show at the time.

On Tuesday, Lewis recounted how things took a turn for the worse. He claimed that for five months, Edward had open access to Lewis’s home and was able to see Monroe whenever he wanted to.

“He was coming in the home once or twice a day,” Lewis said. “Until recently, when something happened last week where it made me very nervous and scared.”

Lewis alleged that after a disagreement they had over email, Edward “locked himself” in Lewis’s guest room.

“He said that he wasn’t going to come out until I left,” Lewis claimed. “And that made me feel very unsafe in my own home.”

After the alleged incident, Lewis said he approached Edward and told him he shouldn’t be coming to the house for visitation with Monroe anymore, but claimed he wasn’t attempting to limit his access to their daughter.

“I will allow you complete access to Monroe, but I think you should just do visitation outside the house,” Lewis recalled saying to Edward.

That’s when, Lewis claimed, he received the letter from Edward’s attorney. However, despite Edward’s legal action, Lewis said that the two were able to have an amicable co-parenting moment for Monroe on Father’s Day when she was sick. Lewis said that Edward took Monroe out to dinner, and she came back with an upset stomach.

“She had diarrhea in the car and she was crying and it hurt and he was holding her,” Lewis said on Tuesday. “She just didn’t want to let go of him. And I said ‘Just come in the house.'”

Lewis says that together, they changed Monroe’s diaper and Edward ordered Pedialyte and they were texting each other all night about the incident.

“It was such a great experience for us coming together,” Lewis said. “I woke up in the morning and at 6:58 I texted him: ‘Good morning. The baby woke up briefly at 5:30-6 but she is now back to sleep. Thank you for coming in last night. I know you and Monroe miss the morning and evening routine. You are welcome to come back in the house moving forward. You scared me when you locked yourself in the house and I felt very uncomfortable and unsafe. I didn’t realize what was happening. I reacted badly and I’m sorry.'”

After that incident, Lewis claimed that he thought he and Edward might be able to have a civil meeting with their attorneys to discuss custody and visitation, but instead, Lewis says Edward “came in hot and it was really ugly.”

The Bravo star also complained about the terms of the potential arrangement, claiming that Edward having Monroe three and a half days a week at his home wouldn’t be ideal for their daughter because he lives a half an hour away from her school.

“I’m so glad we chose a preschool that was close to my house so he could drive her half an hour,” Lewis said, sarcastically. “There’s gotta be some sort of a reasonable judge that says this is insanity. Why did we shop for all of these preschools that were so close to the house when you were going to live in a high rise in downtown Hollywood?”

He also complained that Edward’s apartment might be unfit for Monroe because there is no fencing around the pool and “not a blade of grass.”

“I bought a f—g house in Sherman Oaks and built it for my kid,” he continued. “Everything is for the kid.”

Lewis also insinuated that Edward might have a “financial motive” for hiring an attorney, and said on his radio show that he has questioned if Edward was “struggling” while opening his new design business after leaving Jeff Lewis Design.

WATCH THIS: Flipping Out’s Jenni Pulos Says Her Friendship with Jeff Lewis Is ‘Over’: ‘I Have to Move On’

“I don’t want to make any sort of allegations or anything,” Lewis said. “But there’s a part of me that wonders, is this a financial motive? Like if you have her so many days a week you get x amount of child support.”

“If he would just sit down and talk to me, this could be much better,” Lewis said. “Not only could it be resolved, it could be better than what the courts will say.”

He also said he would be willing to be “generous” with a financial payment to Edward to help with parenting costs.

“If there’s some sort of fear [about] money, talk to me about it. We’ll remedy this together,” Lewis said. “But if he now get’s a court order and pulls that kid from me on Wednesday, it’s not going to be good, and any sort of generosity that I anticipated will be off the table.”

The Flipping Out star also asked his guest Elizabeth Rohm, who plays an attorney on Law & Order, if she had an opinion on another financial situation between he and Edward. When the pair first decided to have a child together, Lewis claimed that he and Edward made an “oral agreement” that Lewis would fund the surrogacy and pregnancy costs for the first child, and Edward would cover the second. (Lewis and Edward’s surrogate filed a lawsuit against them, claiming that Flipping Out filmed her labor without permission and that Lewis and Edward made “disgusting” comments about her. She sought damages for unlawful recording, invasion of privacy and fraud. However, Trent dropped all of the claims against them in March.)

Lewis estimated that the costs of birthing Monroe added up to a quarter of a million dollars.

“I had to sell a piece of real estate to pay for this kid,” Lewis said. “Our agreement was that he would pay for the second child because I thought we would be married forever, so I thought we’d be together forever. So now that we broke up, is he responsible then for half the cost?”

“I was going to ask my attorney that. Since you play an attorney on TV, what do you think?” he asked Rohm. “Can I say, “I need my $125,000 back?’ It’s not even an argument. This was the deal. I’m not getting baby number two from you. Is that reasonable?”

Rohm said yes, she believed it was reasonable.

However, despite all of these disputes, Lewis still maintained that he was not fighting Edward for full parental rights, but instead wants to make sure Monroe is comfortable with the transition.

“I don’t dispute his rights as her parent,” he said. “What I dispute is how we do it. She’s 2 and a half years old. This is her home. Ease her into it.”