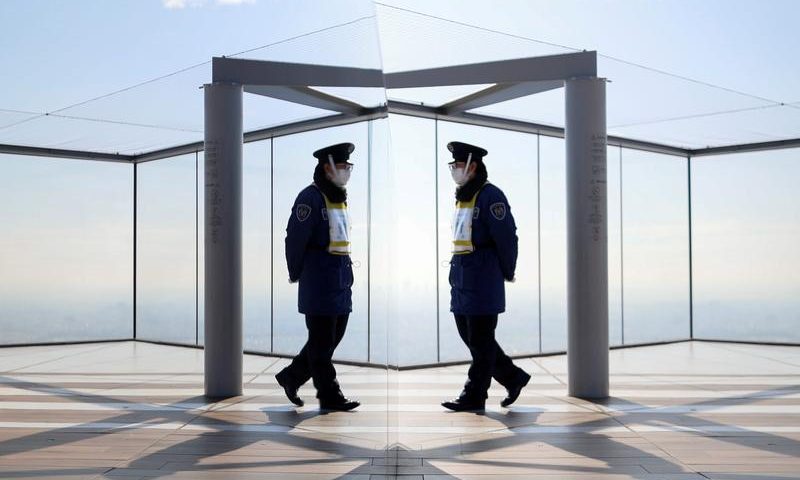 TOKYO (Reuters) – Japan is expected to extend a state of emergency in Tokyo and other regions for another month on Tuesday, seeking to keep the upper hand over a COVID-19 outbreak even as daily case numbers begin to edge down.

FILE PHOTO: A security guard wearing a protective face mask is reflected on the surface of an object, amid the coronavirus disease (COVID-19) outbreak, at an observation deck in Tokyo, Japan January 22, 2021. REUTERS/Issei Kato

Prime Minister Yoshida Suga is due to make a final decision on the extension after a meeting of an expert coronavirus response panel later in the day.

“We’ll respond with a sense of urgency based on the medical situation and virus spread,” Katsunobu Kato, chief cabinet secretary, told reporters.

“The number of new coronavirus cases is falling, but caution is still needed,” Kato said, adding that hospitals remained full and the death rate had not fallen.

Suga and his government remain determined to host the delayed 2020 Summer Olympics, currently scheduled for July-August, despite the resurgence of the virus in Japan.

The government last month imposed a one-month state of emergency for 11 areas, including Tokyo and neighbouring prefectures as well as the western city of Osaka, to combat the country’s third and most lethal coronavirus wave.

However, official measures to control the virus have been hamstrung by a lack of legal weight, including any penalties, meaning the government can only request people follow directives.

That may change later this week with the passage of a revision to the coronavirus special measures law that will allow authorities to levy fines on people who break the law. The revision passed the lower house on Monday and is expected to be approved by the upper house on Wednesday.

Under the current state of emergency, scheduled to end on Sunday, restaurants and bars are requested to trade for shorter hours and people encouraged to stay home as much as possible. The Nikkei daily newspaper reported that gyms, cinemas and karaoke establishments could be added if new daily infections in Tokyo rise above 1,000 for several consecutive days.

Broadcaster NHK said one region, Tochigi, will be omitted from the extension, which could be lifted earlier if the situation improves.

With Japan behind other nations rolling out vaccination programmes, the government has pledged to start inoculating medical workers at the end of February. NHK reported on Tuesday that approval for the Pfizer vaccine could come as early as Feb. 12.

Support for Suga’s government has been battered by disapproval of his handling of the pandemic, a situation not helped when several ruling coalition lawmakers admitted to flouting rules by visiting hostess clubs and bars late at night. One resigned his seat on Monday and three others left Suga’s Liberal Democratic Party (LDP).