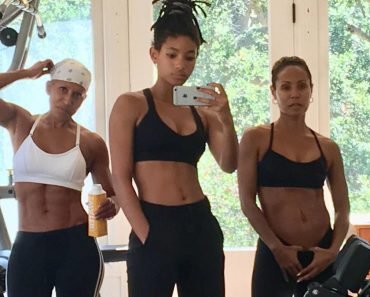 In honor of the New Year, Jada Pinkett Smith is letting some of her fans in on how she maintains such a toned figure.

The 47-year-old actress, who hosts Red Table Talk with her mother, Adrienne Banfield-Jones, 65, and daughter with husband Will Smith, 18-year-old Willow, shared on Facebook Watch that she often relies on fitness bloggers to stay in shape.

Introducing some of the at-home workouts, the mom of two began, “Taking care of your body in the way in which you want is an act of self-love … Self-love is discipline.”

She then joined YouTuber Whitney Simmons. “Whenever I need tips on how to work out specific parts of my body, I go to Whitney Simmons’ YouTube page,” Pinkett Smith says, adding that the influencer makes taking on the gym and lifting weights super simple.

RELATED: Jada Pinkett Smith Shows Off Abs — and So Do Her Daughter Willow and 64-Year-Old Mom

Simmons then shows the three generations of women a few moves that are easy to do at home.

The first is a bicep curl into a shoulder press. Take a light weight, around 5 lbs., and hold it in your fists with palms out. Then curl it up, rotate palms out again, and lift the weights up while keeping hands close to the ears. Reverse the motion on the way down. Try three sets of 10 repetitions each, and be sure to tighten the core the whole time.

Simmons also recommends some high-intensity interval training, or H.I.I.T., for quick cardio. The point is to push hard for 30 seconds and rest for 30 seconds for 5 minutes straight. One possible workout to try during your H.I.I.T. session is a step-up using a step or another object that can hold your weight.

And last, Simmons talked about ab circuits— a series of several exercises done consecutively without resting. One of the movements she demonstrated (with the help of an exhausted Willow) was a core-crunch and hold. To do it, lie on your back but crunch up so the shoulder blades are off the ground. To also target the obliques, alternately reach for the heels while maintaining the crunch position.

Because many of Simmons’ workouts required equipment, Pinkett Smith also collaborated with Instagrammer Brittne Babe, who built her following by creating routines for people who want to workout without spending money.

Babe taught the women how to plank for 30 seconds — the key is to hold the body level, not too high or too low — and the correct squatting posture. Feet should be shoulder-width apart, toes slightly pointed out, and when you bend the knees, not to let them extend past the toes. For a more advanced version, try pulsing as you switch between a basic squat and wide squat. Do this for 3 to 4 sets of 10 reps.

Last, Babe tired out her hosts with 10 burpees, which require you to jump, squat down, extend out legs into a plank, pull legs back into a squat and then repeat the motion.

Pinkett Smith’s interest in inspiring her fans’ to start a fitness routine was prompted by the positive response she received to a workout selfie she posted back in September with her mom and daughter.

“That three generational thing,” she captioned the shot. In it, the three ladies were nearly matching in sports bras and black leggings, while baring their fit midriffs.

And back in August, Smith posted a video of Banfield-Jones breaking a sweat during a gym workout.

“Why is Gam Bam putting me to shame???” Pinkett Smith joked about the post.