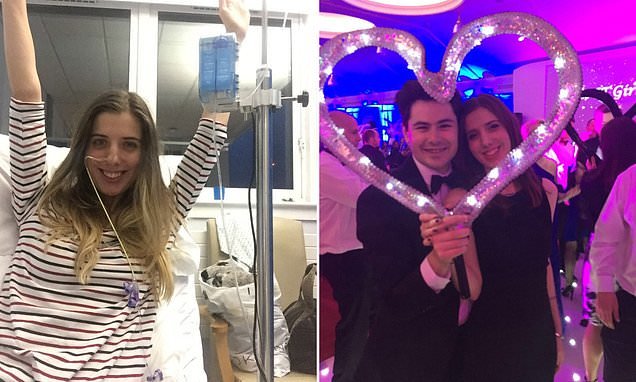 Insurance broker, 24, is suddenly struck down by medical condition that means even lifting a KETTLE can dislocate her wrist

A former insurance broker suffers from a condition that causes her to dislocate her wrist every time she picks up the kettle to make a cup of tea.

Claire Simpson, 24, of Great Missenden, Buckinghamshire, was fit and healthy until she lost control of her bowels while at work in June 2016.

Although humiliated, Miss Simpson struggled into the office the next day only to collapse on the tube and have to ‘pop’ her joints back into place.

For almost a year doctors were baffled as to what was causing Miss Simpson’s symptoms – until her masseuse suggested she may have the tissue-weakening disorder Ehlers-Danlos syndrome (EDS) in March 2017.

With her diagnosis confirmed two months later, Miss Simpson was forced to give up work and moved back in with her parents – along with her boyfriend James Kanter, 29 – last November. 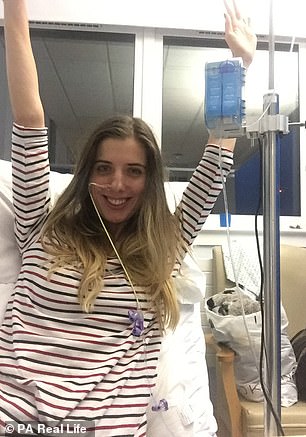 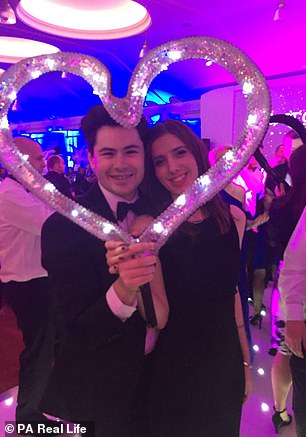 Claire Simpson suffers from a rare condition that causes her to dislocate her wrist every time she picks up the kettle. She first became ill when she lost control of her bowels at work in June 2016 but doctors were baffled as to what the problem was. She is pictured left having tests in hospital before her diagnosis and right with her boyfriend James Kanter before the ordeal

Miss Simpson had never been seriously ill before she suddenly experienced severe abdominal pain and diarrhoea while at work.

‘I was in the office late one night, about to go out to the theatre with James,’ she said.

‘I’d had a bit of a funny tummy all day but didn’t think anything of it, but then suddenly I felt a surge down there and completely lost control of my bowels, releasing before I was able to get to the toilet in time.’

Although embarrassed, Miss Simpson did not think much of the incident and commuted with Mr Kanter – a management consultant she met online in 2014 – from their flat in Maida Vale, north London.

‘I was feeling very faint and my heart was beating very weakly,’ she said.

‘I don’t remember much but James tells me I collapsed on the tube and was then rushed by ambulance to University College Hospital in Euston.’

Doctors told Miss Simpson – then 21 – she likely had gastroenteritis and sent her home to rest.

Miss Simpson is pictured left in hospital – where she underwent cancer screenings, bowel tests and heart examinations – which all came back negative, before eventually being diagnosed. Pictured right before the ordeal, Miss Simpson may now require care for the rest of her life 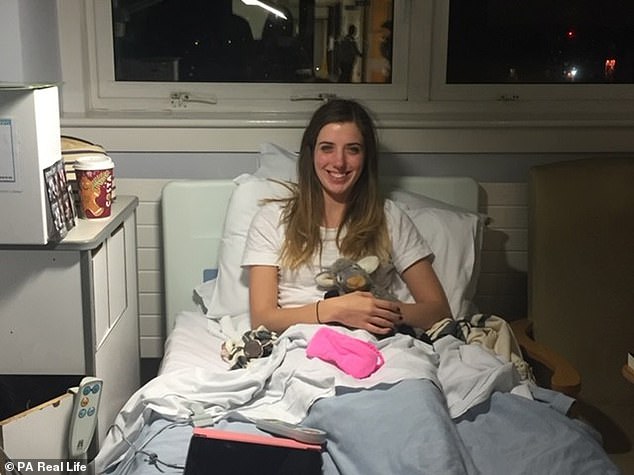 Despite all she has been through, Miss Simpson smiles through her hospital stays and refuses to let her condition hold her back. She hopes medical advances will one day find a cure

Miss Simpson was signed off work while she recovered but medics were unable to get to the bottom of the problem.

‘It was incredibly frustrating because I just wanted to go back to work,’ she said.

‘I felt like I was both letting people down and making a big fuss when actually the doctors couldn’t see that there was anything wrong with me.

‘I had basically become an invalid within the space of just days and couldn’t leave the house. It all happened so quickly.’

Miss Simpson’s symptoms gradually got worse and eventually became a way of life.

‘My joints – in my fingers, wrists and knees – would pop out so often that after a while, it just became part of daily life and I would click them back in myself, not thinking too much of it,’ she said.

‘I was often making hot water bottles to ease my frequently upset stomach and just picking up a kettle would sometimes pop my wrist out of place, which would look quite horrifying as it would become bent all the way back to my forearm.’ 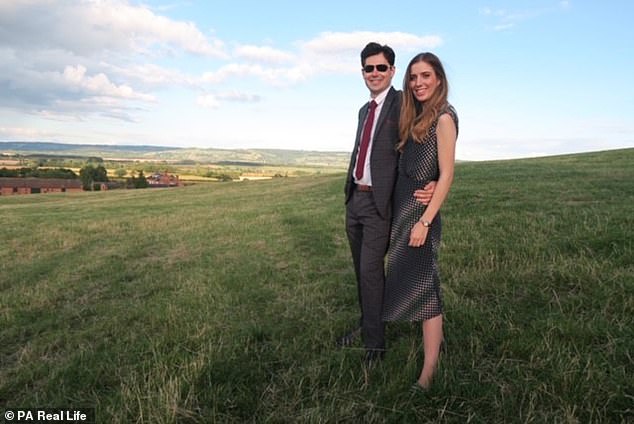 Pictured before the ordeal, Miss Simpson and Mr Kanter met online in 2014. She calls her boyfriend ‘amazing’, with him supporting her even she loses control of her bowels in public

The couple are pictured left on an exotic holiday and right at the Leaning Tower of Pisa before Miss Simpson suddenly became ill. She was fit and healthy before the ordeal began 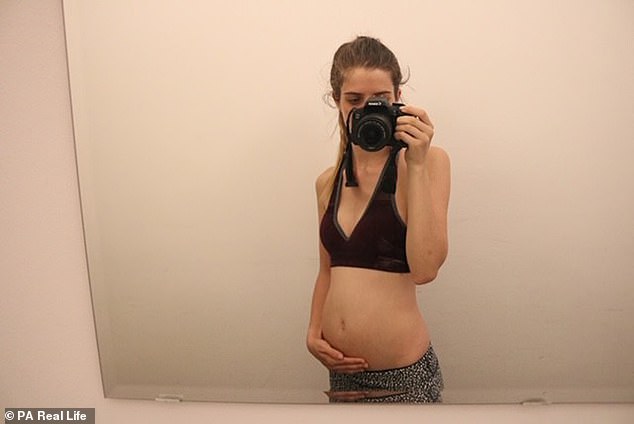 Miss Simpson’s colon has been significantly damaged by her condition, causing her to experience frequent bouts of diarrhoea, constipation and bloating (pictured)

Miss Simpson would repeatedly visit her GP to try and get to the bottom of the problem.

But numerous tests – including cancer screenings, bowel inspections and heart examinations – all came back clear.

It was not until she visited a masseuse for joint pain that Miss Simpson was diagnosed with the rare and incurable condition hypermobile EDS at the London Clinic on Harley Street.

‘I actually cried with happiness when I was eventually diagnosed because I felt like my life was being eaten away by this illness, even though I knew it meant it was going to change my life forever,’ she said.

Now facing the prospect of never being able to return to work, Miss Simpson also has to accept she may need a carer for the rest of her life.

But she refuses to let the condition hold her back and hopes medical advances will one day lead to a treatment.

‘I’m not going to just roll over and accept my illness, so I’m constantly looking for new treatments and trying to find new ways of coping with this,’ she said.

‘There are of course times though when it can all get a bit much and when I consider how I was before I developed EDS, it can be a bit like looking at a totally different person’s life.

‘But then I remember that there have been some positives from this too. My family have been amazing but in particular my boyfriend James.’

Miss Simpson – who constantly has to wear a sanitary towel – added: ‘There are not many boyfriends in their 20s who have to help their girlfriends when they lose control of their bowels in public or fall over because their knee has dislocated.

‘But despite all that, we are still together because I know that he loves me for who I am and not what EDS has done to me.’

Mr Kanter continues to work full time, with the couple living with Miss Simpson’s parents to help them save their one-person salary.

She has adapted her life around her condition by using an at-home bowel irrigation system and a light kettle that is easy for her to lift.

What is Ehlers-Danlos Syndrome?

Ehlers-Danlos syndrome (EDS) is the name for a group of rare inherited conditions that affect the connective tissue.

Different types of EDS are caused by faults in certain genes that make connective tissue weaker.

Depending on the type of EDS, the faulty gene may have been inherited from one paren, or both.

EDS can affect people in different ways. For some the condition is relatively mild, while for others their symptoms can be disabling.

Some of the rare severe types can even be life-threatening.