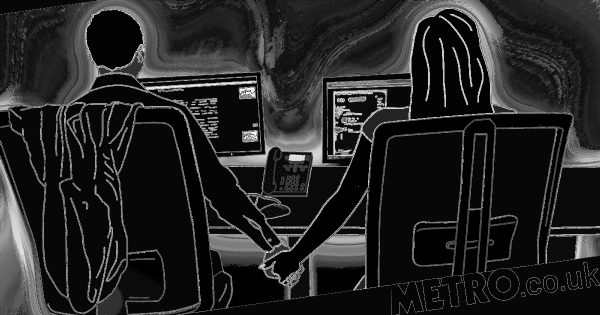 Personally, I’d enjoy a ‘how can I be there for you when your brain’s on fire?’, and for me, it would be to understand if I need to work from home, but otherwise to carry on as normal and ignore it (which I’m not sure is super healthy, but it helps).

For Alison*, she needs to have a thorough debrief after anything at work that may have been more challenging than usual. ‘I need to know that [my colleagues] know I’m competent, despite a mental illness,’ she tells us. ‘Also I’ll need to have days off sometimes – just as I would if I had the flu – and not be made to feel guilty about it.’

I think this is the key here, recognising that mental illness is just that; an illness.

This all comes down to being an understanding colleague who’s not rolling your eyes when someone’s seemingly not pulling their weight, but instead maybe taking them aside for a chat to ask what’s happening, ask how you can help or what they need, and above all to just show that you’re there for them.

Depression makes you feel worthless, and having disgruntled co-workers thinking you’re only good for that spreadsheet (or whatever people do in jobs these days) won’t help.

The biggest thing here is that working environments are often a little fake anyway; people are putting on their ‘work face’ or ‘work mode’ and not entirely acting as they would at home or with real-life-friends. This makes it harder for us all to be honest about how we’re feeling, and does nothing to help the stigmas that still surround depression. I can’t speak for everyone (alas), but I know I was definitely worried about being ‘revealed’ to have depression for years, before I started just wanging on about it on the internet (hi, thanks for reading).

Amanda’s work has led her to recognise that those with depression can often ‘send out non-verbal cues suggesting that colleagues keep their distance.’ She adds: ‘Stigma around mental health may contribute to your colleague’s depression making them fear that they will lose their job if ‘found out’.’

Marian agrees: ‘The biggest thing is misunderstanding what depression is and how it operates. The stigma attached to it can mean people think you are lazy or just a miserable person, when in fact it is an illness.’

Look, we’re all a bit messed up in some ways, and the world is already on fire as it is. Be supportive and understanding, and ask questions sensitively where you can.

Show that you’re not annoyed, but that you’d rather help. If they don’t want to talk about it or don’t want to accept help, knowing that you’re there for them when they’re ready is huge. Well done you. Now back to that group project.