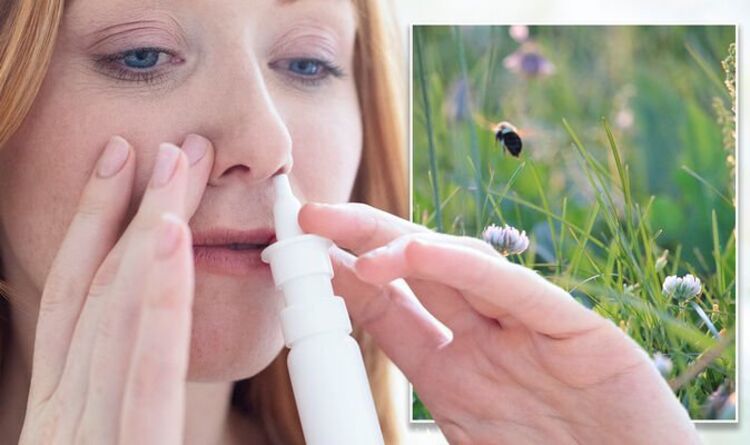 Hayfever is an allergic reaction to pollen and can cause a person to sneeze, cough, have a runny nose, itchy, red or water eyes and an itchy throat. Antihistamine drops, tablets and nasal sprays can help with symptoms, but when to take these depends on the type of hayfever you have, according to Chemist Click pharmacist Abbas Kanani.

He advised: “Most of the time, people who have suffered with hayfever know roughly when it kicks in every year, so it would help to start taking tablets at the earliest onset of symptoms.”

According to the Met Office, tree pollen occurs first, typically from late March to mid-May.

Kanani added: “If you are affected by grass pollen, start using hayfever medication towards the end of April as it affects sufferers between May and June.

“Tree pollen is most prevalent around Feb to June, and you should start taking tablets around February time to avoid symptoms.

“Weed pollen is most prevalent around June to September so you should start treatment towards the beginning of June.”

There hasn’t been too many studies looking into the effectiveness of hay fever medication.

Much of the time, it’s a case of trial and error said Kanani.

He continued: “There are new generation antihistamines such as cetirizine, loratadine and fexofenadine which are non-drowsy for most people, as opposed to chlorphenamine (Pirition) which can cause drowsiness.

“In my experience, fexofenadine appears to have the best results for most patients.

“There is also a hay fever injection for people who suffer from severe and debilitating symptoms of hay fever.”

What other things can you do to help prevent symptoms?

“Vaseline on the tip of your nose and eye lids can help to trap pollen before exposure,” said Kanani.

“Change your clothes when you have been outside as they may have remnants of pollen on them.”

And at what stage should you go to a doctor for help?

“If over the counter remedies have failed, if it is affecting your quality of life, if it is exacerbating other conditions such as asthma, COPD or eczema for example,” said Kanani.

Climate change is believed to have an impact on pollen pattern in the UK.

The Met Office explains: “A changing climate will mean that changes in temperature and rainfall may lengthen the UK pollen season and potentially make pollen concentrations higher.

“It’s possible that climate change will lead to changes in the potency of pollen – a single pollen particle can have varying amounts of the allergy-causing agent on it.”

It says the UK is also facing a threat from changes in the geographical distribution of allergenic plants, due to climate change, with invasive species such as ambrosia (common ragweed) being on the watch list.

“A single ragweed plant can produce a billion grains of pollen per season and its pollen causes strong allergic reactions.”

For more advice on treating hayfever symptoms, speak to a pharmacist.