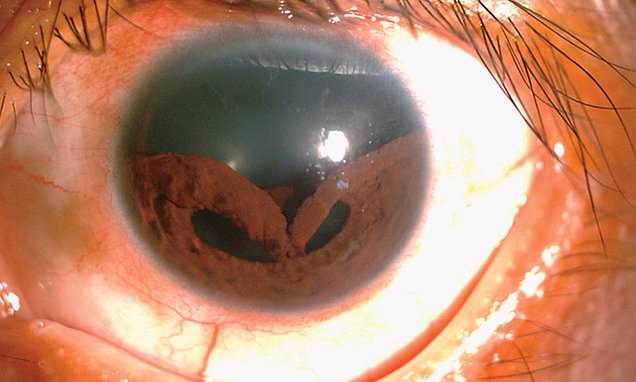 Gruesome pictures shows what a collapsed iris looks like, after a man was struck in his left eye by a bungee cord.

The 48-year-old suffered pain, double vision and blurriness for one week after he was hit with the cord while attempting to ‘secure goods onto a motorcycle’.

An eye examination revealed the unnamed man’s iris was deformed, with the ‘upper portion sagging downward’.

Doctors diagnosed him with traumatic iridodialysis, which occurs when the iris disconnects from the ciliary body. The ciliary body produces the fluid that keeps the eye lubricated and enables the lens to change shape when focusing on an object.

The man, who lives in Taiwan, underwent a iridoplasty, which fires a laser beam at the iris so it contracts and drainage channels that remove excess fluid open.

One year later, his vision improved from 20/200 to 20/50 – meaning he can clearly see something 20 feet away that a person with normal vision can see from 50 feet. And he was left with just a ‘mild deformity’. 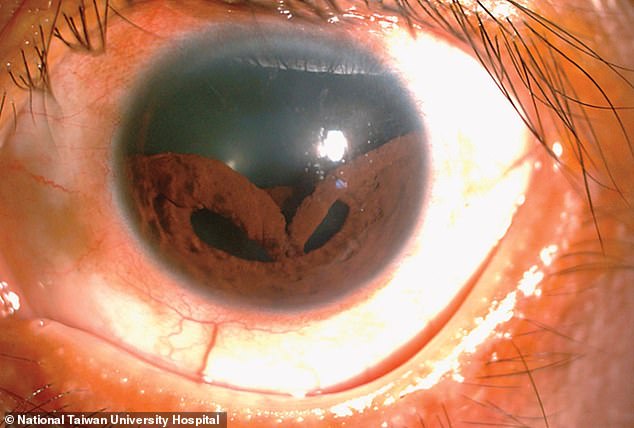 The unnamed man’s iris collapsed after he was struck in his left eye by a bungee cord. The iris is pictured deformed and ‘sagging’ during a ‘slit lamp’ examination. This is often performed by eye-care specialists and involves them viewing the eye’s entire structure via a microscope

The man was treated by a team at the National Taiwan University Hospital. He sought help after he developed a bruised eyelid.

Dr Chia-Chieh Hsiao was the lead author of the bizarre case report published in the New England Journal of Medicine.

The patient sat behind a ‘slit lamp’, which requires a patient rests their chin on a support while placing their forehead against a head rest. An eye-care specialist then peers through a microscope deep into their eyes.

A second eye exam revealed that while wearing glasses the visual acuity in his right eye was 20/40 and his left a shocking 20/200.

There was no evidence the man was suffering from lens dislocation, cataracts or retinal injury.

The authors therefore believe the separation of his iris from the ciliary body caused his symptoms. 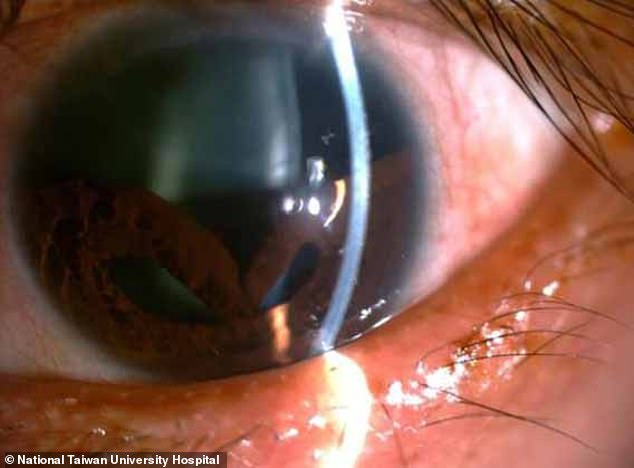 The man’s collapsed iris (pictured again) was restored after he underwent a iridoplasty. This involves applying a laser beam to the iris so it contracts and helps to open drainage channels

Dr Nicholas Bell – a clinical professor in the department of ophthalmology and visual science at the University of Texas in Houston – told CNN the condition is ‘relatively uncommon’.

‘Bungee cord and airbag injuries seem to more frequently result in traumatic iridodialysis because of the focally concentrated strong force,’ he said.

Dr Bell – who was not involved in the patient’s care – stressed, however, air bags save lives and should never be avoided.

Dr J Martin Heur – medical director of the USC Roski Eye Institute, who was also not involved – said the procedure takes around half-an-hour and involves ‘sewing’ the iris back into place.

The man continued to improve over the next year, with tests revealing he had no evidence of glaucoma.

However, Dr Heur warns glaucoma – when the optic nerve is damaged by the pressure of fluid inside the eye – can arise even years after the injury.

Traumatic iridodialysis occurs when the root of the iris – the coloured part of the eye – separates from the ciliary body.

The ciliary body produces the fluid that keeps the eye lubricated and enables the lens to change shape when focusing on an object.

Traumatic iridodialysis can occur due to a blunt object striking the iris or a penetrating injury.

Dr Nicholas Bell – a clinical professor in the department of ophthalmology & visual science at the University of Texas in Houston – told CNN the condition is ‘relatively uncommon’.

Untreated, it can lead to glaucoma – when the optic nerve is damaged by the pressure of fluid inside the eye – even years later.

Symptoms include pain and blurred vision. The eye may also be blood-shot with an irregular pupil. Patients may suffer vision loss over time.

Treatment focuses on administering topical anti-glaucoma drugs early on after the injury. Surgery may also be required.

This may include iridoplasty, which involves applying a laser beam to the iris so it contracts and helps to open drainage channels that remove excess fluid.