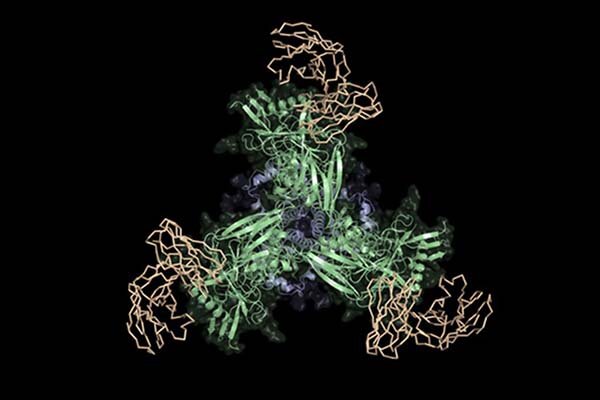 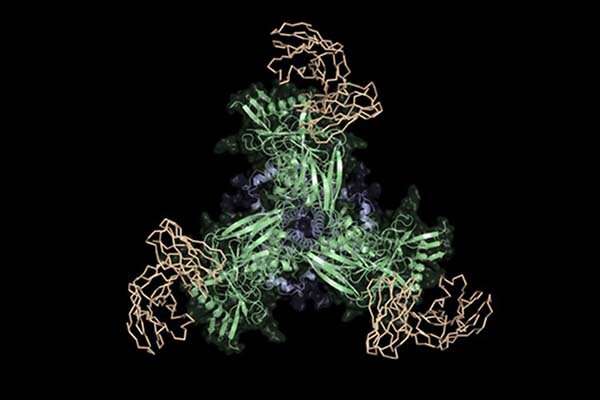 A collaborative team of scientists has made a successful proof-of-principle demonstration of an advanced HIV vaccine strategy—an approach that may also work in protecting people from an array of other deadly infectious diseases.

The team, led by scientists at Scripps Research, also included the Ragon Institute of Massachusetts General Hospital, MIT and Harvard University; the La Jolla Institute for Immunology; and IAVI, a scientific research organization focused on HIV and other global health challenges. Their research appears in Science.

The new vaccine strategy centers on stimulating the immune system to produce broadly neutralizing antibodies (bnAbs) against HIV. These special antibodies are capable of neutralizing many different strains of the fast-mutating virus by binding to important yet difficult-to-access regions of the virus surface that don’t vary much from strain to strain.

A vaccine that elicits such antibodies could save many millions of lives and billions of dollars—and ultimately, may help eliminate HIV as a significant public health problem. Based on a concept called “germline targeting,” this novel strategy could potentially provide protection against the millions of different strains of the virus circulating globally. Achieving this goal has so far been elusive; no HIV vaccine candidate has ever been shown to induce a protective bnAb response in humans.

“I believe that we need a germline-targeting strategy to develop an effective vaccine against HIV, and the same type of strategy may be helpful for making vaccines against many other difficult pathogens,” says the study’s co-senior author William Schief, Ph.D., a professor in the Department of Immunology and Microbiology at Scripps Research. “Here, with a great collaborative effort among multiple labs, we’ve shown the feasibility of a general germline-targeting approach.”

“This is a very ambitious project that requires a multi-disciplinary approach and can only succeed by virtue of collaboration,” Batista says.

The germline-targeting approach is meant to launch the production of a desired bnAb by stimulating the right antibody-producing cells. Antibodies are produced by immune cells called B cells, which start out in a “naïve” or “germline” state.

A large repertoire of these germline B cells circulates in the blood and other tissues. In a viral infection—or after immunization with a vaccine that mimics an infecting virus—some germline B cells will bind at least weakly to structures on the surface of the virus. That will stimulate the cells to begin a weeks-long maturation process, in which the antibodies continuously improve in their ability to bind to the surface, thereby neutralizing the virus.

Schief and colleagues previously demonstrated a germline-targeting strategy for one special case: a bnAb that grabs hold of HIV in an unusual way. The new approach is more powerful because it works for antibodies that grip their targets via a much more common mechanism. Furthermore, analyses performed in the study indicate that the approach can likely also be applied to vaccines for many other difficult pathogens such as influenza, dengue virus, Zika virus, hepatitis C and malaria.

To demonstrate the feasibility of their strategy, Schief and Jon Steichen, Ph.D., a study co-first author and senior scientist in the Schief lab, started by choosing a known HIV bnAb called BG18 as the test case. Informed by structural studies of BG18 bound to its target on the virus—including structures determined for this study in the lab of Andrew Ward, Ph.D., professor of Integrative Structural and Computational Biology at Scripps Research, and published structures from the lab of Pamela Bjorkman, Ph.D., at Caltech—Steichen and Schief identified key features of this antibody’s HIV-gripping ability.

Next, they searched a large database of human antibody genes in order to find B cells making antibodies that naturally share BG18’s key features. Then they used a sophisticated strategy to select and evolve a set of virus-mimicking proteins that could potentially activate multiple BG18-like B cells. These proteins would eventually serve as “immunogens” to stimulate BG18-like B cells in human vaccination.

“As the repertoire of B cells differs from person to person, and in the same person over time, we believe that you need to target more than a few of these cells to have a reasonable chance of activating one of them in any given vaccine recipient,” Steichen says.

In the lab of Shane Crotty at the La Jolla Institute for Immunology, tests of blood samples from HIV-negative human donors confirmed that the team’s immunogens bound well to normal circulating B cells that have the desired BG18-like features.

“Some of these B cells were exactly the type we were looking for,” says study co-first author Colin Havenar-Daughton, Ph.D., a senior scientist in the Crotty lab. Cryo-electron microscopy analyses in the Scripps Research lab of Andrew Ward, Ph.D., revealed that the antibodies produced by these B cells mimicked the structure of BG18 at the atomic level.

Facundo Batista’s lab at the Ragon Institute conducted experiments in mice that were engineered to carry BG18-precursor B cells, and their experiments showed that the immunogens could activate these B cells to induce potent antibody responses.

“We generated a mouse model with rare BG18 precursors and high levels of competing B cells, mimicking physiological conditions encountered during human immunization,” says co-first author Ying-Cing Lin, Ph.D., a postdoctoral fellow in the Batista laboratory. “We found that the designed immunogens stimulated a strong and specific response from the BG18 precursors, and the elicited antibodies showed signs that they were maturing in the right direction.”