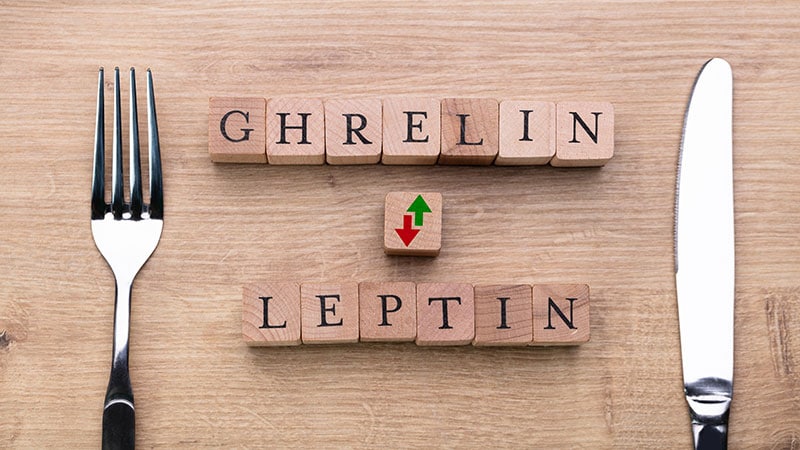 The current study is a new analysis of data from the randomized DIRECT-PLUS trial, which showed that the addition of green tea and substitution of red meat for a plant-based (Mankai) protein shake at dinner — dubbed the “green Mediterranean diet” — resulted in further improved cardiometabolic benefits compared with the traditional Mediterranean diet among people with baseline abdominal obesity and/or dyslipidemia.

The results were published online in the Journal of Clinical Endocrinology and Metabolism by Gal Tsaban, MD, a nutritional researcher and cardiologist at Ben-Gurion University and Soroka University Medical Center, Be’er-Sheva, Israel, and colleagues.

They specifically looked at ghrelin, nicknamed the “hunger hormone”, a neuropeptide mainly secreted by the gastric epithelium. It acts on the pituitary gland to release growth hormone. Ghrelin concentrations increase during fasting and decrease after eating. Lower levels are associated with insulin resistance and obesity.

Fasting ghrelin levels were elevated with weight loss, but those increases were associated with improved insulin sensitivity and regression of visceral adipose tissue even beyond weight loss.

“This specific study is the first to show that ghrelin levels play an important role in metabolic adaptation to a dietary or lifestyle intervention and that ghrelin is an important player in the axis of adiposity, insulin resistance, and metabolic health,” Tsaban told Medscape Medical News.

The data partially explain some of the prior beneficial effects seen with the Green Mediterranean diet, even after adjustment for weight loss, he explained, noting that the revised version of the diet “could be considered as an alternative lifestyle intervention with possible metabolic benefits even beyond the Mediterranean diet, which is what we currently recommend for patients.”

Asked for comment, Christopher Gardner, PhD, was not as enthusiastic.

He took issue with the fact that ghrelin wasn’t a primary or even a prespecified secondary outcome of the DIRECT-PLUS trial, and because the specific plant-based ingredients of the green Mediterranean diet used in the study may not be widely available or desirable, and therefore limit the study’s generalizability.

Gardner, who is director of nutrition studies at the Stanford Prevention Research Center, California, also said: “They’re tying lots of interesting things together. The Mediterranean diet is a cool thing, ghrelin is a cool thing, and insulin resistance is hugely important in this day and age, even though we don’t all agree on how to measure it.”

“But it gets tough as you try to link them all together for an exploratory outcome…To me it’s an interesting hypothesis-generating study that pushes a lot of interesting buttons that are hot topics in the field.”

In DIRECT-PLUS, a total of 294 adults (88% men) older than 30 years of age with abdominal obesity (waist circumference >102 cm for men or >88 cm for women), or dyslipidemia (triglycerides >150 mg/dL and HDL-cholesterol ≤40 mg/dL for men or ≤50 mg/dL for women) were included. Half had prediabetes or type 2 diabetes.

They were randomized to one of three diets: a diet based on standard healthy dietary guidelines; a traditional Mediterranean diet low in simple carbohydrates, rich in vegetables, with poultry and fish replacing beef and lamb and 28 g/day of walnuts; or the Green-Mediterranean diet, including 3-4 cups/day of green tea and 100 g/day of a green shake made from the Mankai strain of Wolffia globosa (also known as duckweed) replacing dinner, and 28 g/day of walnuts.

By 18 months, fasting ghrelin was significantly greater compared with baseline only in the green Mediterranean group (P = .012).

Because the differences in fasting ghrelin trajectories were only significant in men — likely due to the small sample size of women — a subsequent 18-month analysis was limited to the men. In a multivariate model adjusted for age, intervention group, baseline biomarker values, and 18-month weight changes, the 18-month change in fasting ghrelin remained a significant predictor for changes in A1c and homeostatic model of insulin resistance (HOMA-IR; P = .022).

Because weight loss remained the most significant predictor of improved insulin resistance, a further analysis examined the association between changes in fasting ghrelin levels with changes in the fraction of insulin resistance marker that were not attributed to weight loss per se. With the other adjustments, fasting ghrelin was associated with residual reductions in A1c (P = .003), HOMA-IR (P = .021), increased HDL-cholesterol (P = .024), and relative visceral adipose tissue loss (P = .003).

No Specific Product Needed to Push Mediterranean Diet Towards Vegan

Tsaban said the Mankai shake is commonly consumed in Israel but is also available worldwide. The study participants, all employees at an isolated nuclear research facility in the Negev, were particularly motivated. “They didn’t have a satiety problem with the drink. It made them very full,” he said. The manufacturer supplied the shakes but didn’t fund the study, he added.

However, Tsaban said that the “green Mediterranean diet” doesn’t depend on specific products.

Rather, “the concept is to push the Mediterranean diet a bit further and to replace the animal-based protein with vegetable-based protein, to shift your dietary habits towards a more vegan lifestyle. It’s not completely vegan, but it’s tending there…Our main goal was to increase the polyphenol intake, the antioxidant intake from vegetables…I think it can be replicated.”

Gardner said, “At the end of the day, it’s an exploratory study…It raises some interesting points that give the rest of us room to follow-up on.”

Miriam E. Tucker is a freelance journalist based in the Washington, DC, area. She is a regular contributor to Medscape, with other work appearing in the Washington Post, NPR’s Shots blog, and Diabetes Forecast magazine. She is on Twitter @MiriamETucker.