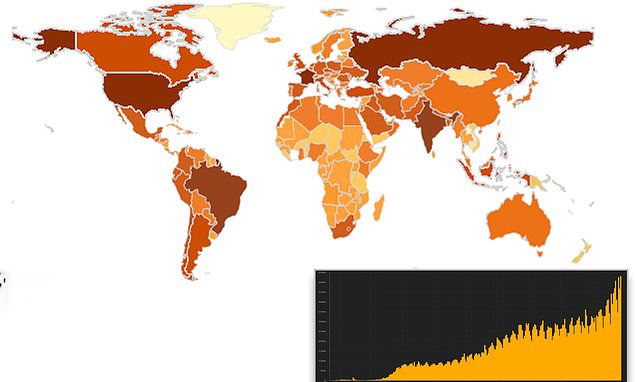 Global coronavirus cases soar by HALF A MILLION in ONE DAY in record-breaking rise: More than 44 million have been infected and 1.17 million have died since the pandemic began

Global coronavirus cases rose by more than 500,000 for the first time on Wednesday, a record one-day increase as countries across the Northern Hemisphere reported daily spikes.

Global daily COVID-19 cases have risen by nearly 25 percent in less than two weeks as the world witnessed 400,000 daily reported cases for the first time last Friday, according to a Reuters tally.

It comes the same week that the U.S. a record high of over 83,000 infections on Friday, and reached a record high seven-day rolling average number of cases, with more than 74,000 daily infections recorded on Wednesday.

Most western countries and parts of Latin America have reported their highest single-day surges in the past few weeks.

Many governments, with the notable exception of the United States, have started taking stronger measures to bring the spread of the virus under control.

The global coronavirus tally stands at 44.7 million cases and about 1.17 million deaths. 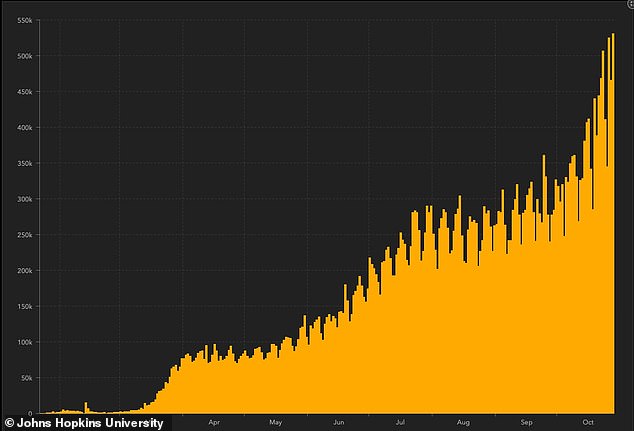 Europe’s new daily infections have doubled over the past two weeks as it reported more than 250,000 cases for the first time on Wednesday, according to a Reuters tally.

The region has so far reported about 9.5 million cases and about 261,000 deaths.

France reported a new record daily total of more than 50,000 infections for the first time on Sunday.

Euro-zone economic activity has slipped back into decline this month as renewed restrictions to control the coronavirus pandemic forced many businesses in the bloc’s dominant service industry to limit operations, a survey showed last Friday.

The United States continues to lead the worldwide coronavirus tally with about 8.9 million infections and about 228,000 fatalities since the pandemic started. 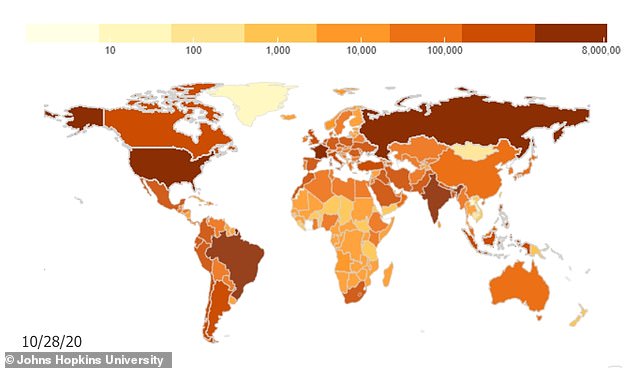 The US, Brazil, Russia and France have recorded more cases than any other nations over the course of the pandemic, but Wednesday’s record-breaking increase is driven by surging case numbers in Northern Hemisphere nations including the  uK 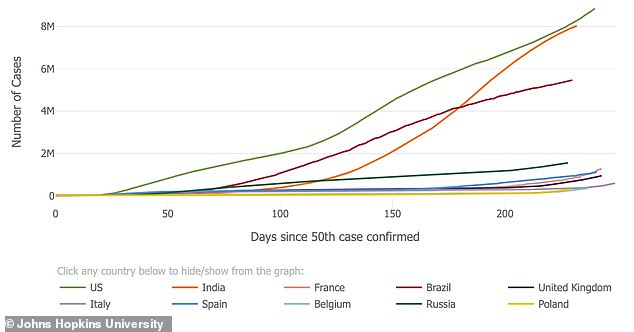 Nations like Poland and Italy have had some of the greatest numbers of infections, but are smaller and have not seen the exponential increase of the more populous US or India

The United States broke its daily record for new coronavirus infections on Friday as it reported 84,169 new cases due to outbreaks in virtually every part of the country shortly before its presidential election on Tuesday.

The United States is reporting about 75,000 cases a day on an average, according to a Reuters analysis and its death toll from COVID-19 could surpass 500,000 by February unless nearly all Americans wear face masks, researchers said.

Asia surpassed 10 million infections of the new coronavirus on Saturday, the second-heaviest regional toll in the world, according to a Reuters tally, as cases continue to mount in India despite a slowdown and sharp declines elsewhere.

India, the world’s second most populous country as well as the second worst affected country, is reporting about 48,000 cases a day on an average with a total of about eight million cases, according to a Reuters tally.

As Indian Prime Minister Narendra Modi promised to provide any successful vaccine to each of India’s 1.3 billion people.

The country is preparing a database of all government and private health personnel to speed up vaccinations once they become available.

In the Middle East, Iran, the most affected COVID-19 infections country is reporting one death every three minutes, according to state television.