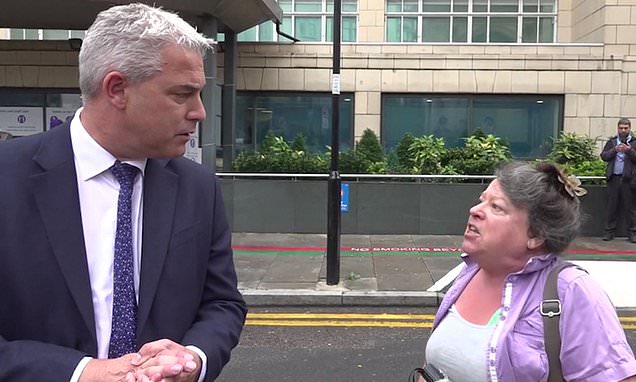 ‘People have died… you’ve done bugger all’: Furious woman interrupts Health Secretary Steve Barclay’s interview to grill him about deadly NHS ambulance crisis which has seen patients wait 40-plus HOURS to be taken to hospital

A furious woman ambushed Steve Barclay in an interview to slam him for doing ‘bugger all’ about deadly ambulance crisis today.

She was passing by outside Moorfields Eye Hospital in central London where the Health Secretary had been on a visit when she made the outburst.

The woman claimed ‘people have died’, insisting the Government is doing nothing about lengthy waits, which have seen some patients wait more than 40 hours.

An elderly woman died after being forced to wait 15 hours for an ambulance to arrive, according to a report by the Care Quality Commission (CQC) published today.

And thousands of people have been left still waiting for their 999 call to be answered in the time it should have taken for paramedics to reach patients.

Ambulances are supposed to reach patients in the most life-threatening conditions within seven minutes, but 3,764 urgent calls were not answered in that window in England last month.

Yesterday, Mr Barclay summoned the bosses of the six worst-performing NHS trusts for a dressing down about the growing crisis.

The Health Secretary described delays as ‘unaceptable’ and claimed they were his biggest priority.

But critics have continued to demand the Government does more to urgently address the problem. 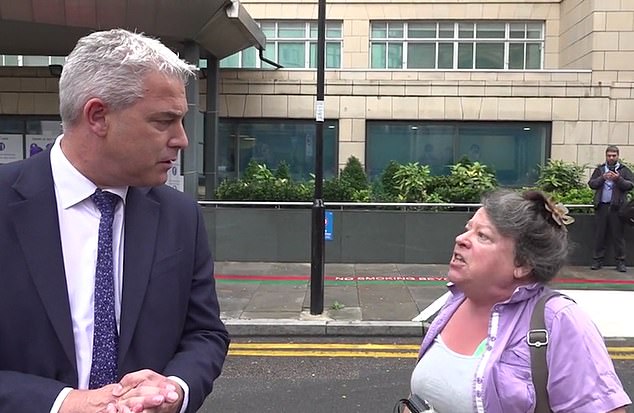 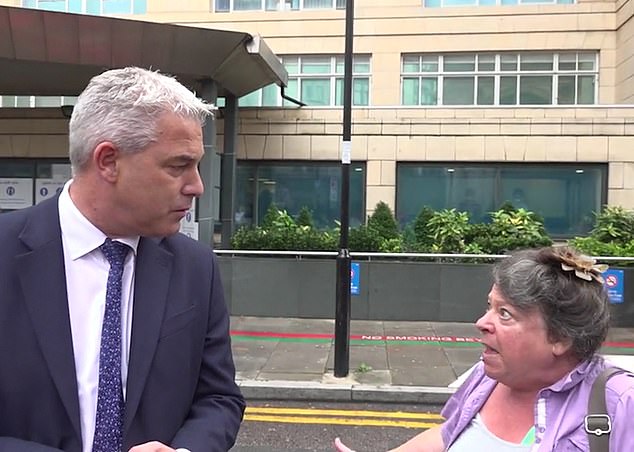 Interrupting the minister, she says: ‘Are you going to do anything about the ambulances waiting, and the people dying out?’ 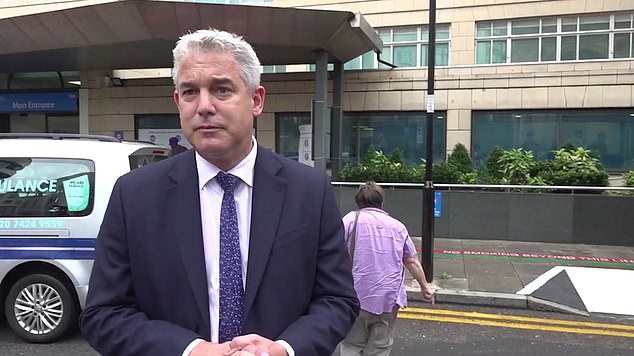 She turns on her heel and heads straight into the hospital, leaving an awkward-looking Mr Barclay speechless 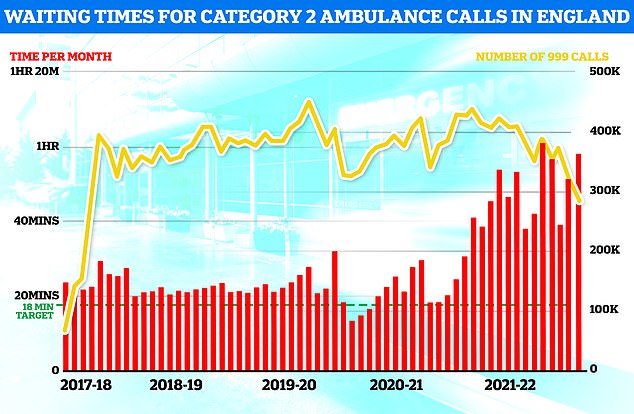 NHS England ambulance figures show the average wait for heart attack and stroke victims surpassed 59 minutes for only the second time ever (red bars). The yellow line shows the number of category two calls, which hit 379,460 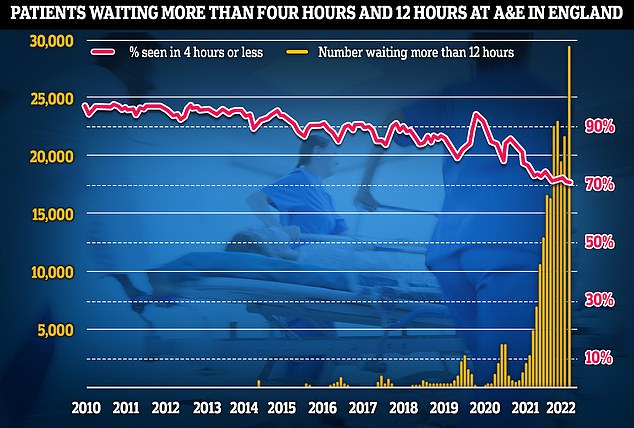 Latest NHS England data for July shows that more than 29,000 sickened people waited 12 hours at A&E units last month (yellow lines) — four times more than the NHS target and up by a third on June, which was the previous record. Meanwhile, the proportion of patients seen within four hours — the timeframe 95 per cent of people are supposed to be seen within — dropped to 71 per cent last month (red line), the lowest rate logged since records began in 2010

As many as 500 people are dying every week in England because of the crisis in NHS emergency departments, according to analysis.

A&E performance has plummeted to its worst ever level over recent months with patients waiting up to 40 hours for a bed, while the sick are facing near-record waits for ambulances.

So far in 2022, there have been over 11,000 ‘excess deaths’ — the number of fatalities above the five-year average, which is a marker of how many are expected.

Excess deaths had been high for most of the pandemic because so many people were dying from Covid.

But the trend shifted towards the end of 2021 when vaccines stifled the virus death rate. While Covid deaths have remained low, since June there have been around 1,000 more people dying every week in England and Wales than usual from unexplained causes.

It prompted some scientists to theorise it was down to the knock-on effects of lockdown restrictions and delays to hospital care worsening conditions like cancer, diabetes and heart disease.

The Department of Health has ordered an ‘urgent review’ into the cause of these deaths.

Footage shows Mr Barclay answering a question from the interviewer before noticing the irate woman approaching.

Interrupting the minister, she says: ‘Are you going to do anything about the ambulances waiting, and the people dying out?’

Looking uneasy, Mr Barclay replies: ‘Of course we are.’

But the woman hit back, adding: ‘Don’t you think 12 years is long enough?

‘Twelve years — you’ve done bugger all about it. People have died, and all you’ve done is nothing.’

She turns on her heel and heads straight into the hospital, leaving an awkward-looking Mr Barclay speechless.

Following the heated interaction, when asked whether the NHS was equipped for winter given the ambulance delays, Mr Barclay claimed the Government is already taking steps to address the crisis.

He said: ‘There’s a range of measures that we’re taking.

‘[We’ve pledged] an extra £150million to the ambulance service, a further 50million into call centres, for 111 and 999, in terms of call handling, a further £30million into St John’s Ambulance around the auxiliary ambulance performance.

‘We’re also then looking at what happens with the ambulance handovers, so emergency departments, how we triage those, how we look at the allocation of this within the system.

‘Of course, that is all connected to delayed discharge and people being ready to leave hospital who are not doing so, and that’s about the integration of care between social care and hospitals.

‘So there’s a range of issues within how we deliver on ambulances, but it’s an absolute priority both for the Government and for NHS England.’

The trust is responsible for care of 7million people in Berkshire, Buckinghamshire, Hampshire and Oxfordshire.

An elderly patient died in October 2021 five days after fracturing her hip, with a medical examiner citing delays by the service as contributing to her death. 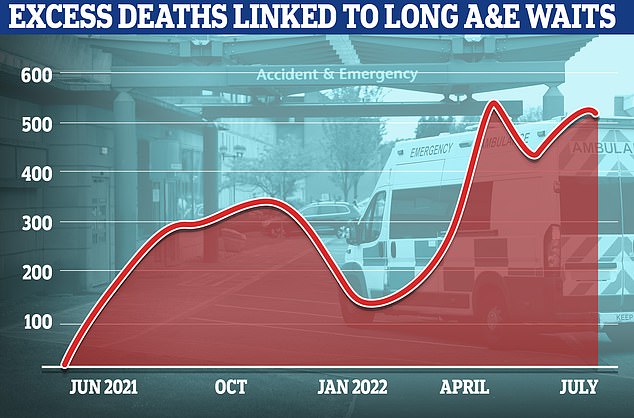 As many as 500 people are dying every week in England because of the crisis in NHS emergency departments, according to an analysis that lays bare the devastating toll of the summer crisis. The graph shows the numbers of excess deaths linked to long A&E waits

The Health Secretary said: ‘There are factors outside your control. I want to work with you to understand what’s in your control and what’s reliant on others.’

NHS England identified the six trusts for Mr Barclay based on the largest numbers of hours lost to handover delays and the impact that reducing delays would have on the ambulance service in their areas.

Some trusts’ performance deteriorated recently while others had been poor for years.

Three of the six trusts summoned to the meeting are in the South West region, where there was an emergency care crisis last winter.

In addition, four of them — Plymouth, Leicester, Birmingham and Worcestershire — are on NHSE’s lists of trusts with the worst elective and cancer backlog recovery.

Delays are expected to have led to almost 40,000 patients having come to harm last month, according to national figures published by the Association of Ambulance Chief Executives.

Delays are predominantly blamed on A&Es not being able to discharge patients due to a shortage of community beds, causing ambulances to wait for hours outside to unload patients.

Dr Katherine Henderson, president of the Royal College of Emergency Medicine, said last week that the situation was a ‘major crisis’.

She said: ‘The reasonable expectation of a healthcare system is that if you call an ambulance, an ambulance turns up quickly and you get the care you need… we have broken that fundamental promise with the public of being able to do that.’