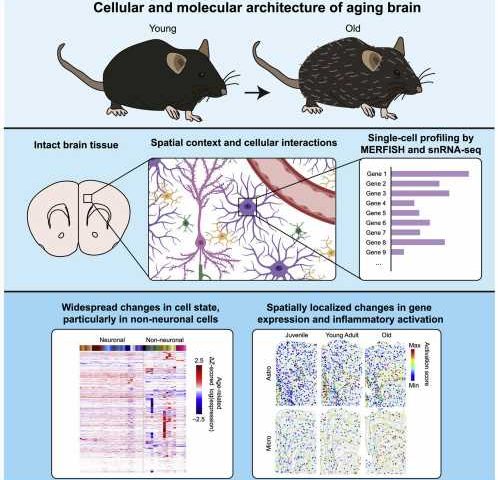 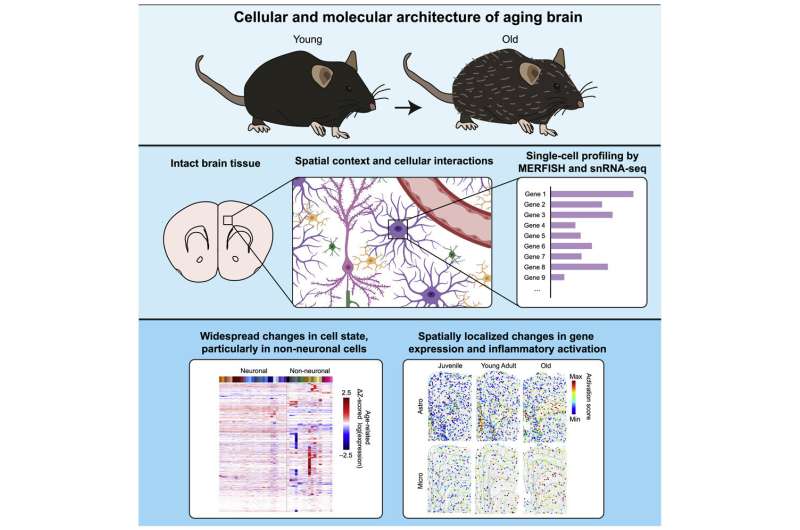 Results from a new study by Harvard researchers just published in Cell offer insights into the relationship between inflammation and the cognitive impairment we experience as we age, and suggest the possibility that it may be a result of a kind of cellular chain reaction.

“Understanding aging is one of the most important goals in biomedicine,” said Xiaowei Zhuang, David B. Arnold Jr. Professor of Science in the department of chemistry and chemical biology, professor of physics, Howard Hughes Medical Institute (HHMI) investigator, and one of the paper’s authors. “It is also a very challenging problem. One reason is because the brain is very complex. It contains an exceptionally high diversity of cells, with many different types of neurons and non-neuronal cells forming intricate interaction networks.”

To study such an intricate system, researchers used an imaging method known as MERFISH, developed by the Zhuang lab, which has extensive expertise in inventing novel imaging methods and applying them to study biological systems. MERFISH (for Multiplexed Error Robust Fluorescence In Situ Hybridization) is capable of simultaneously measuring not only thousands of types of RNA, or thousands of genes, in cells, it also reveals the spatial relationships between them.

MERFISH allowed researchers to generate “atlases of gene expression,” looking at “neighborhood relationships” between cells, explained Catherine Dulac, Samuel W. Morris University Professor in the department of Molecular and Cellular Biology, HHMI investigator, and another of the paper’s authors. With MERFISH, said Dulac, “one can look not only at changes in gene expression across different ages, but also changes in gene expression, in particular cell types, related to their spatial relationship.”

Applying this big-picture approach to mouse brains, William E. Allen, a Harvard junior fellow, and two other researchers, Timothy R. Blosser and Zuri A. Sullivan from the Zhuang and Dulac labs, identified how neuronal—or nerve—cells and non-neuronal cells changed during aging. In particular, the study revealed that aging and inflammation affected how genes were expressed by cells in both similar and distinct ways and in a spatially dependent manner.

“The idea that part of the brain aging process is related to inflammation has been hypothesized already,” said Dulac. “The experimental strategies we used—MERFISH, in combination with single-cell RNA sequencing—enabled us to look at the aging process very specifically and with high granularity.”

“We found that non-neuronal cells, such as glial and immune cells, appear to undergo more pronounced changes in gene expression and cell states than neurons. And these changes don’t happen uniformly in the brain,” said Zhuang, noting that subcortical white matter showed more pronounced alterations than the gray matter, notably in the non-neuronal oligodendrocytes, astrocytes, and microglia. “Since these various cells ensure efficient electrical impulses across the brain by producing a myelin sheath around axons, as well as provide metabolic support for neurons, modulate synaptic functions, and provide immune surveillances,” Zhuang said, “these changes could have a direct impact on the function of neural circuits.”

“If oligodendrocytes are not healthy and start to shed myelin” this can start a chain reaction affecting neurons as well as non-neuronal cells that will “basically disturb many functions in the entire brain,” said Dulac.

That was striking, said Dulac, because “ultimately, aging is associated with impairment in cognition, which is directly linked to neuronal function. But if many of the changes occur in non-neuronal cells, then we may have identified a multistep process in which inflammation primarily affects non-neuronal cells, which in turn leads to impairments in neuronal function.”

Breaking down this process offers the prospect of influencing, if not stopping, it. “If there were ways through lifestyle, for example through diet, exercise, or other processes, to actually reduce the inflammatory process associated with aging, then brain aging and associated impairments could also be reduced,” said Dulac.

For now, these findings provide a roadmap for ongoing research, studies made possible by techniques such as MERFISH. Being able to “comprehensively sample all different kinds of cells and a very large number of genes in intact tissue provides a rich resource of information that can allow us to generate new hypotheses for future studies,” said Dulac.

The collaboration between the two researchers began more than a decade ago. “A number of years ago Xiaowei contacted me because her lab had just developed a super-high-resolution microscopy technology, STORM, and she was very interested in looking at brain function using this,” recalled Dulac. “This led us to initiate a wonderful collaboration where we could, for the first time, observe brain synapses at super-high resolution.” Their first joint paper, published 12 years ago, led to a string of ongoing projects incorporating new techniques and the researchers’ complementary skills.