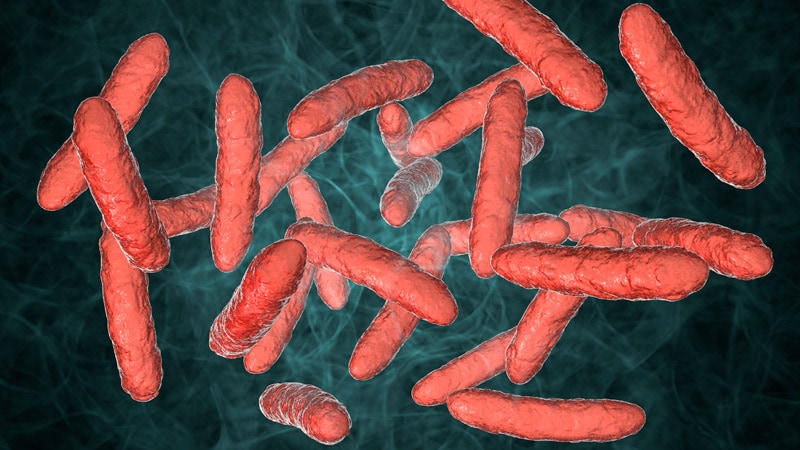 In adults with febrile urinary tract infection (UTI), use of a “forgotten antibiotic” called temocillin led to less disturbance of the intestinal microbiota than cefotaxime, with significantly lower Enterobacterales proportions, according to a study report in The Lancet Infectious Diseases. Susceptibility to third-generation cephalosporins was also lowered in patients receiving temocillin.

The rich commensal microbiota of the distal gut is a breeding ground for resistant microorganisms, and collateral damage to the human microbiota can occur with use of antibiotics. The study’s aim was to evaluate temocillin use with respect to intestinal colonization with third-generation cephalosporin-resistant pathogens.

The authors, led by Håkan Hanberger, MD, Linköping University, Linköping, Sweden, noted that the increasing prevalence of third-generation cephalosporin-resistant E coli infections has led to use of carbapenems and an increased risk of multidrug-resistant Enterobacterales and C difficile infection. Because cefotaxime and other third-generation cephalosporins are associated with greater selection risk for antimicrobial resistance, alternative antibiotics have been sought. In empirical treatment of febrile UTIs, temocillin — which has a narrow spectrum and demonstrated low C difficile infection risk relative to cephalosporins and carbapenems — may be an alternative that is less prone to disturbing the intestinal microbiota.

The randomized, multicenter, superiority, open-label phase 4 trial was conducted among 152 adult patients admitted to 12 Swedish hospitals and treated for suspected or diagnosed febrile UTI (complicated or uncomplicated), including pyelonephritis. All had indications for intravenous antibiotic treatment.

They were randomly assigned 1:1 to either 2 g of temocillin (n = 77) or 1-2 g of cefotaxime (n = 75), both given every 8 hours (open label, but masked to those conducting microbiological analyses). Patients were treated for 7-10 days (14 in the presence of bacteremia), with a minimum of 3 days on the study drug, with a switch to oral agents (ciprofloxacin, ceftibuten, cefixime, or co-trimoxazole) allowed subsequent to improvement. Colonization was determined through rectal swabs.

The composite primary outcome was colonization with Enterobacterales with reduced susceptibility to third generation cephalosporins, or colonization with toxin-producing C. difficile, or both. It was assessed after discontinuation of the intravenous study drug, but before step-down to oral therapy was initiated.

Mean patient age was 72.5 years and 54% were female. Analysis revealed less disturbance of the intestinal microbiota in the temocillin group, with the composite primary endpoint met in 18 (26%) of 68 participants receiving temocillin, and in 30 (48%) of 62 patients receiving cefotaxime (risk difference –22%; 95% CI, –42% to –3%).

Analysis of the microbiota showed a significantly lower proportion of Enterobacterales in the temocillin group vs the cefotaxime group with reduced susceptibility to third generation cephalosporins (P =.0049). While intestinal colonization by toxin-producing C difficile after intravenous study drug treatment was detected in 3 patients receiving temocillin and in 1 patient receiving cefotaxime, none of these developed C difficile infections.

Given the comparable safety and bacteriological efficacy of temocillin and cefotaxime with less intestinal microbiota disturbance for temocillin, the authors concluded, “Our findings indicate that temocillin is an ecologically favorable alternative to cefotaxime in the treatment of febrile UTIs.”

In an accompanying editorial, Cees van Nieuwkoop, MD, PhD, Department of Internal Medicine, Haga Teaching Hospital, The Hague, the Netherlands questioned the relevance of the findings at the patient level, given that the gut microbiota differences between temocillin and cefotaxime diminished quickly and were no longer significant at the end of antibiotic therapy. Short follow-up prevented the assessment of effects of therapy on recurrent UTI or other disrupted gut microbiota sequelae.

Van Nieuwkoop posited that, “[R]educing antibiotic treatment duration might be a more efficient way to avoid collateral damage to the gut microbiota.” He also wondered whether, with febrile UTI or pyelonephritis being often self-limiting, could a single dose of temocillin or a third generation cephalosporin be sufficient? The challenge would then be to learn which patients need prolonged antibiotic treatment and which don’t.

“This is an interesting paper,” Van Nieuwkoop said in an interview with Medscape Medical News, “but in my opinion it does not change the current routine treatment practice of febrile UTI. However, in areas with a high prevalence of resistant uropathogens, temocillin is a good alternative to spare carbapenems.”

“We need oral stepdown antibiotics with effects on pyelonephritis/febrile UTI with less ecological disturbances than those currently used,” Hanberger told Medscape Medical News. “Or we need to use IV treatment with low ecological impact for the whole course.”

An additional advantage of temocillin use would be decreased selection of resistant intestinal bacteria in hospitals, reducing hospital-related infections from resistant bacteria. Hanberger added, “Recent studies of bacteremia due to Enterobacterales have shown that it is possible to shorten the treatment duration from 14 to 7 days.” Randomized controlled trials are warranted to find the minimum length of IV treatment needed for febrile UTI among women and men, he said.

The study authors and Van Nieuwkoop have disclosed no relevant financial relationships.