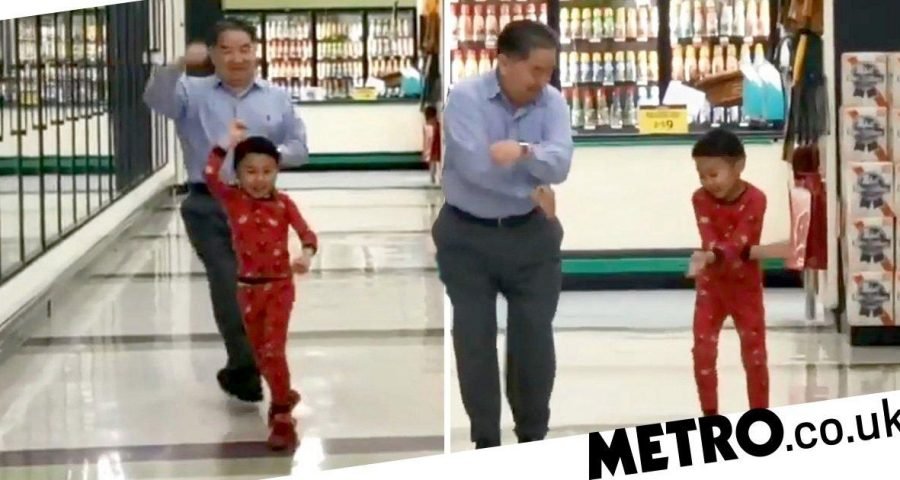 Kyu San Juan, a five-year-old from Wisconsin, U.S, wanted to show his, granddad, Txhiaj Sawm Muas, that you can have a dance party anywhere.

So he asked his mum to drive them to a local supermarket where the two had a dance-off in the frozen aisle.

But unlike most spirited five-year-olds, Kyu was due for major surgery the next day to be treated for a condition he was born with.

The youngster has cerebral arteriovenous malformation (AVM), an abnormal connection between the arteries and veins in the brain.

Last year, Kyu had a craniotomy AVM resection – where a surgical opening is made in the skull – performed. But following a one-year post-operation checkup, Kyu’s AVM grew back.

Before going into surgery in the morning, Kyu organised an impromptu dance party to show his grandpa that ‘you can dance anywhere’.

Mum Ràšámî Møûä, who set up a Facebook page to fundraise for Kyu’s medical bills, wrote about how the adorable dance party came to be.

She said Kyu didn’t change out of his PJs while he waited for his grandpa to change. The two were then driven to Festival Foods where they picked a random aisle to bust some serious moves.

Kyu replied: ‘No grandpa, we dance here in the groceries store.’

When Txhiaj told the youngster that he thought they were going to a party or even a club and that people may stare at them while they danced away, Kyu said he had no time for passersby.

‘People? What people? Grandpa, Use your imagination. You can dance anywhere!’ he encouraged.

Mum Ràšámî filmed the whole thing and thanked her dad for partaking, saying: ‘Thanks dad for being such a good sport for Kyu and giving him all of your time before his surgery tomorrow. It was pretty fun!’

Kyu has now had the operation which went well.

An update was shared on the group, saying: ‘The surgery went well and better than what the doctors had anticipated. Thank you everyone for your concerns, support and prayers.

‘We love you all so much! Mark and I truly appreciate your love for our son.’

If you want to see more adorable content from Kyu or donate to his page, you can check out the Facebook page.