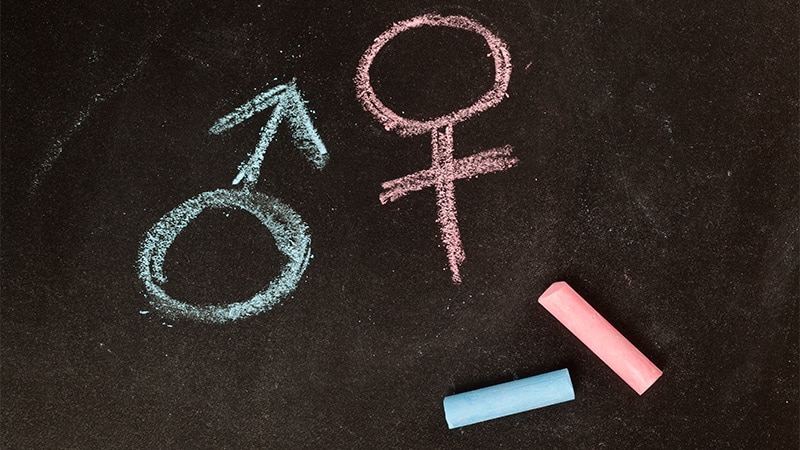 A new study of transcatheter aortic valve replacement (TAVR) in patients with bicuspid anatomy showed that women have more in-hospital adverse events than men and miss out on the survival advantage TAVR often affords women with tricuspid anatomy.

Although the survival curves appeared to diverge immediately after the procedure, there was no significant difference between women and men in all-cause deaths at 30 days (7 vs 12) or 1 year (13 vs 18).

Predictors of 1-year death were different between the sexes, however, with baseline characteristics seeming to play a major role for men, whereas bleeding was the only independent predictor for women.

“In our bicuspid cohort, women were also healthier than men, but the presence of bicuspid morphology raised the incidence of PVL and higher residual gradients, which could counteract the effect from better baseline characteristics,” he told theheart.org | Medscape Cardiology.

Indeed, PVL greater than mild was reported in 5.9% of women in the current study, compared with 2.7% of women with tricuspid valves who underwent TAVR with first-generation valves in a previous study.

This bicuspid cohort was also younger than commonly reported in tricuspid patients, and the survival benefit was present in both sexes, “which can further decrease the difference in survival between women and men,” Chen said.

The study was published in the August 22 issue of JACC: Cardiovascular Interventions.

Patients with bicuspid aortic valve (BAV) referred for TAVR are a distinct population, with lower surgical risk scores but challenging anatomy, and are likely to increase in numbers as the indications for TAVR expand into younger, lower-risk patients.

To help bridge the gap, the investigators examined data from 225 women and 285 men with severe bicuspid stenosis who underwent TAVR with largely first-generation devices, typically the Venus-A valve (Venous MedTech), at West China Hospital between April 2012 and November 2021.

Their age (mean, 72 years) was comparable, as were Society of Thoracic Surgeons Predicted Risk of Mortality (STS-PROM) scores (5.6% vs 4.9%).

Men had more coexisting conditions, such as chronic lung disease, prior coronary stenting, and significant aortic regurgitation, and a lower left ventricular ejection fraction than women (55.7% vs 60.9%). They also had a greater proportion of Sievers type 1 BAV (53.2% vs 39.3%), higher calcium volumes (920 vs 548 mm3), and larger aortic root dimensions.

Previous studies have reported that type 0 BAV is associated with higher residual gradients and may aggravate the prosthesis-patient mismatch that is more commonly seen in women, first author Jing-Jing He, MD, also from West China Hospital, Sichuan University, and colleagues write. “Balloon dilation before and after the valve deployment and appropriate selection of prosthesis type and size may bring benefits to women.”

The study is limited by a lack of information about several female-specific factors, such as age at menopause and pregnancy; follow-up was insufficient to reveal the prognostic implications of high residual gradients and significant PVL; and most procedures were performed using first-generation valves, the study team notes.

Asked how the use of first-generation valves may have influenced outcomes, Chen said it “mostly impacts periprocedural outcomes.” The devices often have larger sheaths, so rates of bleeding and vascular complications tend to be higher than contemporary practice. First-generation valves are also not retrievable and don’t have an outer skirt, resulting in more need for second valve implantation and PVL.

“Though new-generation valves are prevailing in the expansion of TAVR to bicuspid valves, we still believe these data can guide the procedure for optimal outcome,” he added.

That said, the findings should be externally examined in different populations, as some features are very specific to Asian ancestry, such as the high prevalence of type 0 bicuspid, he added. “We are also interested to see whether the reduction in bleeding or vascular complications can bring greater benefits for women.”

In a linked editorial, Didier Tchétché, MD, and Mauro Boiago, MD, Clinique Pasteur, Toulouse, France, point out that previous studies underscore the negative impacts of bleeding and vascular complications, which are clearly more frequent in women with bicuspid or tricuspid valves undergoing TAVR.

“As a practical solution, specific actions could be taken to prevent these events. For instance, selecting devices with better delivery catheter profiles and avoiding high-dose heparin or dual-antiplatelet therapy, when feasible, could be beneficial for female patients,” the editorialists suggest.

Tchétché and Boiago say that many other sex-related issues could be better understood and that trials dedicated to women are needed. “This is key to ensuring that sex differences are implemented in the decision-making process, so patients are treated with the best individual options.”

“The SMART trial also includes patients with bicuspid aortic valves and could be the next step toward validating the interesting findings of He et al,” the editorialists write.

This work was supported by the National Natural Science Foundation of China, Sichuan Province Department of Science and Technology, West China Hospital, and the China Postdoctoral Science Foundation. Mao Chen and Yuan Feng are proctors and consultants for Venus MedTech, MicroPort, and Peijia Medical. All other authors and the editorialists declare no competing interests.