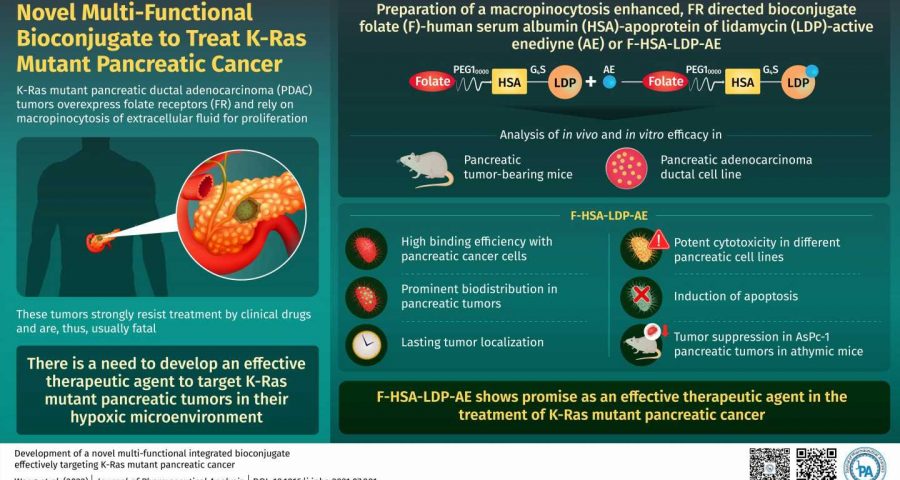 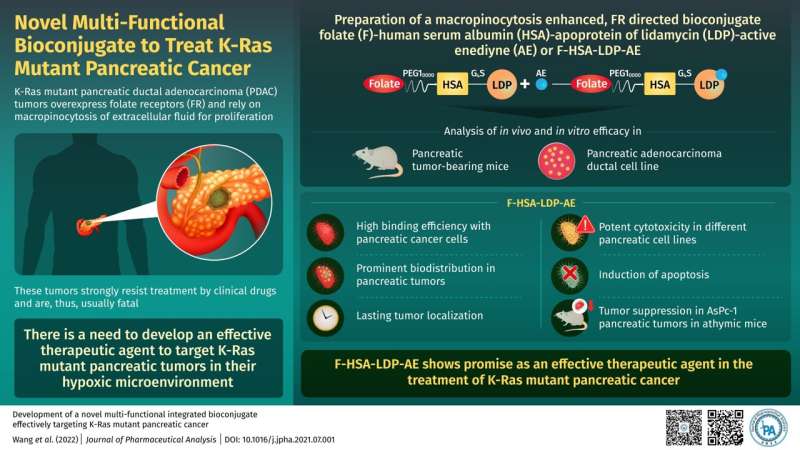 Often undetected until it has progressed to an advanced stage, pancreatic ductal adenocarcinoma (PDAC) is a lethal cancer. The K-Ras mutant pancreatic cancer is one of the most common types. At present, there are no effective treatments for this type of cancer, as it is resistant to most clinical drugs. However, research findings indicate that K-Ras mutant PDAC cells rely on macropinocytosis for uptake of extracellular fluids—primarily human serum albumin (HSA)—for their nutrition and growth. Interestingly, K-Ras mutant tumors also overexpress folate receptors (FR), which have long been used as a therapeutic target for the treatment of other types of cancers.

Recently, a team of researchers from China, including Professor Qing-Fang Miao and Professor Yong-Su Zhen from the Chinese Academy of Sciences developed an FR-targeting, micropinocytosis-mediated bioconjugate that attacks K-Ras mutant pancreatic cancer. This study was made available online in April 2022, and was published in the Journal of Pharmaceutical Analysis.

Next, they checked the efficacy of F-HSA-LDP-AE on different types of pancreatic cancer cell lines, and in athymic mice containing K-Ras PDAC. They found that F-HSA-LDP displayed a high binding efficiency to FRs, indicating that it was largely taken up by K-Ras pancreatic tumors via macropinocytosis. It also displayed adequate biodistribution and long-lasting localization within the tumors.

They also found that F-HSA-LDP-AE was highly cytotoxic and capable of inducing apoptosis in different types of pancreatic cell lines. Moreover, it was very effective at suppressing the growth of tumors in AsPc-1 pancreatic cancer xenografts in athymic mice.