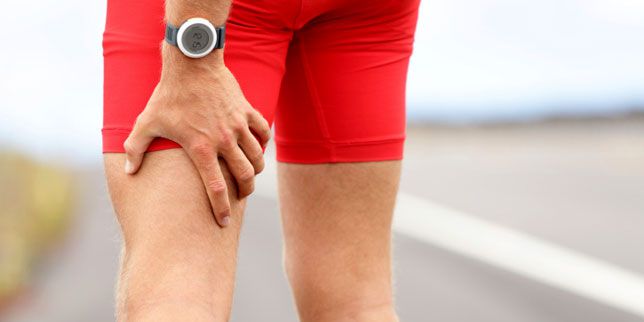 Ahh, the hamstring strain. It’s happened to plenty of athletes—and loads of everyday people, too. One moment, you’re just running along. The next, you’re crumpling to the floor, grabbing the back of your thigh in agony.

It’s an all-too-common injury, and it’s one that requires a smart rehab program—at least if you’re hoping to stay healthy after it. You feel your hamstrings in a host of motions, everything from running to walking to squatting and deadlifting to kicking a soccer ball, so the injury can easily nag and not go away. That’s the last thing you want.

Hamstring injuries have a high recurrence rate, for a variety of reasons. My goal as a physical therapist is to get you back in action, and keep you healthy after your comeback. Yes, you want to get back quickly, but if we’re going to keep you back in your sport of choice, we have to strike that perfect balance between working quickly, and not rushing things. Here’s how you do that, and get back to running (or squatting, or playing basketball, or whatever it is that you want to do) safely:

A computer rendering of the biceps femoris muscle.
Getty ImagesSCIEPRO

As a group, your hamstrings impact function throughout the pelvis and your lower body. They’re key to letting you bend your knee (knee flexion), play a role in straightening it (knee extension), and they influence pelvic rotation and tilt, and hip extension and rotation.

Hamstring strains are most likely to occur in sports that involve sudden bursts of running, or in those moments when you need a sudden burst of speed. Most hamstring injuries result from explosive high-speed running, extreme range of motion, or rapid deceleration from a high speed.

Think football and basketball, games that have you exploding quickly, often after a quick cut. You explode quickly in other situations too, though. Imagine being midway through a 5k run, trying to pass somebody just in front of you, and accelerating as best as you can to do that.

Whatever the situation, you’re most likely going to strain your hamstring when you swing your lower leg forward and then drive your calf back to explode forward. Studies have confirmed that hamstrings contract most powerfully when they’re applying a braking force to your quads and hip flexors to slow you down.

Right After The Strain

Recovery from a hamstring injury requires patience. Every situation is different, but there are some general guidelines that can help you.

Start with the basics during the first 24 to 48 hours, resting the muscle, icing it, compressing it, and keeping it elevated. (Yes, that means a lot of time on the couch). Your biggest cause for concern: Signs of swelling and bruising. In those situations, consider consulting with an orthopedist to rule out a hamstring avulsion.

After 48 hours, you can generally start to work to improve blood flow and restore mobility. Foam rolling the area can help, as can percussive therapy, which includes devices like the Theragun and Hyperice Hypervolt.

You could also see a masseuse trained in Graston technique. Whatever you do, don’t be too aggressive, or you could hinder the recovery process.

What Not To Do

The most common mistake I constantly see people make in hamstring recovery is stretching. It’s instinct, too: You feel pain in the belly of the muscle, and you think stretching it might alleviate the pain. But that’s the last thing you want to do. If there are any microtears within your hamstring, you’re doing more harm than good if you stretch too soon, potentially worsening those tears and creating a longer healing process.

Don’t push the muscle yet. Yes, it’s hard, but you need to be patient.

When You Feel Better

You’ve done these many times: Get in plank position on your forearms. Look to hold the position for 30 seconds; aim to do 3 or 4 reps.

These will hit your glutes. Get on all fours, hands directly below your shoulders, knees slightly wider than hip-width apart. Tighten your core. Without moving your torso, lift your right leg off the ground, and bring it in line with your torso. Squeeze your glute That’s 1 rep; do 3 sets of 10 to 12 per leg.

Then you can start to hit the weights with very specific exercises, while still continuing to strengthen your glutes and core. Keep these exercises in mind as you go forward, but be careful with your tempo. Start by moving slowly through these exercises for a few workouts.

Lie in a leg curl station, with your lower calf on the leg curl pad and your knee lined up with the pivot point. Working to move only at the knee, slowly curl the pad upwards. Pause once you’ve gone as far as your hamstring will contract, then return to the start. That’s 1 rep; do 3 sets of 10 to 12 per leg.

Hold medium-weight dumbbells at your hips, arms hanging naturally, feet slightly wider than hip-width apart. Keeping the weights close to your legs and keeping your core braced, push your butt back and bend slightly at the knee, lowering your torso until it’s parallel with the ground or until you feel a stretch in your hamstrings. Slowly stand back up, squeezing your glutes at the top of the motion. That’s 1 rep; do 3 sets of 10 to 12.

After you’ve had a few workouts of success here, you can start to introduce movements like squat jumps and backward jogging. These are the final steps in your return. Once you clear those, you’re ready to get back to the game!