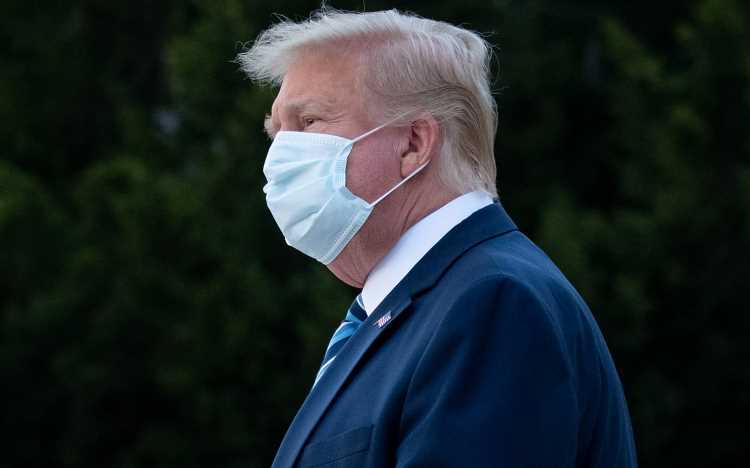 On Sunday, President Donald Trump’s physician said he gave the president dexamethasone, a steroid that has been found to help improve COVID-19 symptoms in severely sick patients. The decision to give him the drug raised questions about Trump’s condition, which his doctors have painted as “mild,” including on Monday when the president left Walter Reed Military Medical Center and returned to the White House.

The president’s physician, Dr. Sean Conley, said they decided to give Trump dexamethasone to address his low oxygen level, which had twice dipped below normal over the weekend, requiring supplemental oxygen.

"We debated the reasons for this, and whether we'd even intervene," said Conley of the two episodes. "It was a determination of the team based on the timeline from the initial diagnosis that we initiate dexamethasone."

The use of dexamethasone is an indication that Trump’s case may be more severe than his physicians have let on, says Dr. William Schaffner, professor of preventive medicine and infectious diseases at the Vanderbilt University School of Medicine.

“We don't have the details of his medical history and all the results of the tests, but his physicians must have been concerned that he either had, or was about to develop, a pneumonia,” Schaffner tells PEOPLE. Pneumonia occurs when the body has created an inflammatory immune response to fight COVID-19, but “it’s an over-response.”

“That over-response can have the collateral damage of paradoxically injuring the lung itself, and that inflammation can be tamped down and can be modulated by the use of dexamethasone,” Schaffner says.

The drug is a “very straightforward medication,” but it can come with side effects, Schaffner says.

“Since it modulates the inflammatory response, it can mask fever,” he says. “So if you're using fever as an indicator of how your patient is doing, you have to interpret the data with caution if your patient is receiving a steroid, such dexamethasone.”

“The other thing it does, it can be kind of an upper and make the patient seemingly feel better when actually they're sicker than they think. Now that's good for the patient, but it can fake out the doctors. So you have to be well aware of that side effect of dexamethasone,” he says. Trump, touting the “great drugs” developed to treat the virus, tweeted Monday that “I feel better than I did 20 years ago!” He reiterated that in a video at the White House, saying “I didn’t feel so good and … two days ago I felt great, better than I have in a long time.”

The White House did not respond to a request for comment about the president’s condition as of Tuesday or questions about how the steroid may affect him. Aides said he is expected to speak publicly “at some point today.”

With Trump now back at the White House, Schaffner says the “hope is that the president continues to do well” — but he’ll have the medical staff there “ready to respond if things start to take a downturn.”

“And I think that that's very important, because most of us I think would have recommended for a patient in his circumstance to stay in the hospital for a day or two longer,” Schaffner says. “But you know, when you send other patients home, they don't go to the White House where there's a medical team on call.”

As information about the coronavirus pandemic rapidly changes, PEOPLE is committed to providing the most recent data in our coverage. Some of the information in this story may have changed after publication. For the latest on COVID-19, readers are encouraged to use online resources from the WHO and local public health departments. PEOPLE has partnered with GoFundMe to raise money for the COVID-19 Relief Fund, a GoFundMe.org fundraiser to support everything from frontline responders to families in need, as well as organizations helping communities. For more information or to donate, click here.