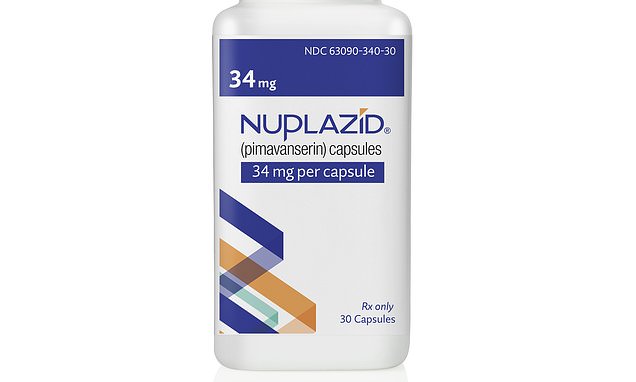 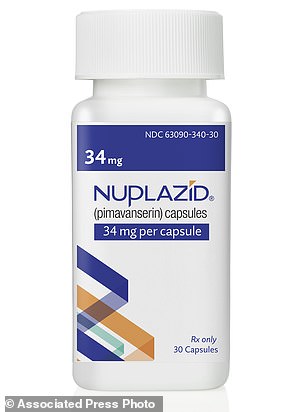 Pimavanserin, a daily pill sold under the brand name Nuplazid, was shown to halve the chance of psychosis in people with dementia

A daily pill that treats psychosis in people with Parkinson’s can curb the same symptoms in dementia patients, a study has found.

Pimavanserin, sold under the brand name Nuplazid, was shown to halve the chance of delusions in people with the memory-robbing disorder.

The study of more than 400 dementia patients was stopped early because the benefit was so blatant, researchers say.

It was approved for Parkinson’s-related psychosis in 2016 and is thought to work by blocking a brain chemical that causes delusions.

If regulators approve the drug it could become the first new medicine for dementia in nearly two decades.

It targets some of the most troubling symptoms that patients and caregivers face – hallucinations that often lead to anxiety, aggression, and physical and verbal abuse.

Around 8million people in the US have dementia and 850,000 in Britain. Studies suggest that a third of them develop psychosis.

There is currently no safe nor effective treatment available for psychosis and the symptoms are extremely distressing for patients and their families.

Acadia Pharmaceuticals – the San Diego-based maker of the drug – funded the trial, which saw 400 dementia patients given a low dose for three months.

They were then split into two groups and half continued on the drug. The others were given dummy pills for six months or until they had a relapse or worsening of symptoms.

THE WAR ON ALZHEIMER’S: MORE THAN 150 TRIALS HAVE FAILED IN 20 YEARS

Scientists have for years been scrambling to find a way to treat or prevent Alzheimer’s disease, which accounts for around two thirds of the 50million dementia patients worldwide.

But attempts to tackle the brain-destroying disease have been beset with failures.

In March this year the pharmaceutical company Biogen abandoned two late-stage trials of a promising Alzheimer’s drug, aducanumab, which it hoped would work by clearing the brain of sticky build-ups.

After years of research and testing the company decided its prospects looked poor in the end stages of a human trial and pulled the plug, wiping $18billion (£13.8bn) off its own market value.

In January, the firm Roche announced it was discontinuing two trials which were in their third phase of human testing.

It was trying to develop crenezumab, which worked by preventing build-up of plaques in the brain and had already been proven safe, but wasn’t having the desired results.

Between 1998 and 2017 there were around 146 failed attempts to develop Alzheimer’s drugs, according to science news website, BioSpace.

Billions of dollars have been invested in the industry and a successful, marketable treatment would likely make a fortune for the company which gets there first.

Experts have said a difficulty in testing drugs on the right people may be partly to blame – Alzheimer’s is rarely diagnosed before it has taken hold and, by that time, it is often too late or studying people becomes too difficult.

For drugs which try to modify the course of a disease, trials often have to be longer and more in-depth, making them more difficult and costly, researchers wrote in the journal Expert Opinion on Investigational Drugs.

The same researchers added scientists may be struggling to find the correct dose of drugs which could work, and that they may be recruiting the wrong types of people to test them on.

Neither the patients nor their doctors knew who was getting what. Independent monitors stopped the study when they saw that those on dummy pills were more than twice as likely as those on the drug to relapse or have their psychosis worsen – 28 per cent versus nearly 13 per cent.

Two deaths occurred, but study leaders said neither was related to the drug.

It’s not known whether the US Food and Drug Administration would want more evidence to approve a new use for Nuplazid. It is not yet approved for treating Parkinsons-related psychosis in the UK.

The $3,000-a-month (£2,300) price tag means cost could be an issue for patients in the US. The results were revealed on Wednesday at an Alzheimer’s conference in San Diego.

Since being rolled out to the public in 2017, Nuplazid has been linked to 700 deaths. It comes with a box warning of an increased risk of mortality.

But the FDA has concluded the drug’s benefit continues to outweigh its risks for patients with hallucinations – whose lives would be misery without it.

There is no concrete evidence to suggest the drug directly caused death in any of the 700 victims – but the warning remains in place.

Dementia is an umbrella term used to describe a range of progressive neurological disorders, that is, conditions affecting the brain.

There are many different types of dementia, of which Alzheimer’s disease is the most common.

Some people may have a combination of types of dementia.

Dementia is a global concern but it is most often seen in wealthier countries, where people are likely to live into very old age.

HOW MANY PEOPLE ARE AFFECTED?

The Alzheimer’s Society reports there are more than 850,000 people living with dementia in the UK today, of which more than 500,000 have Alzheimer’s.

It is estimated that the number of people living with dementia in the UK by 2025 will rise to over 1 million.

As a person’s age increases, so does the risk of them developing dementia.

Rates of diagnosis are improving but many people with dementia are thought to still be undiagnosed.

IS THERE A CURE?

Currently there is no cure for dementia.

But new drugs can slow down its progression and the earlier it is spotted the more effective treatments are.