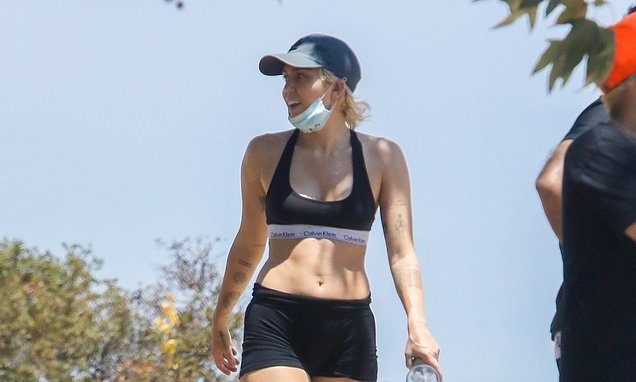 DR ELLIE CANNON: Don’t stress about how to wear your mask – just don’t wear it like Miley Cyrus

Back in April, I started wearing a face mask – or rather, a cloth face covering – when out and about. And I suggested, in these pages, that if everyone did the same we’d get out of lockdown sooner, and possibly see off this virus for good.

Earlier on in the pandemic I’d written an article that reflected the medical consensus at that time: that mask-wearing didn’t help protect people from getting Covid-19. So my new stance must have seemed something of a U-turn.

But – as I find myself pointing out quite often at the moment – while our understanding of how to tackle this new virus is developing rapidly, there are still grey areas and unanswered questions. And that’s why, based on evolving evidence, guidance sometimes has to change. 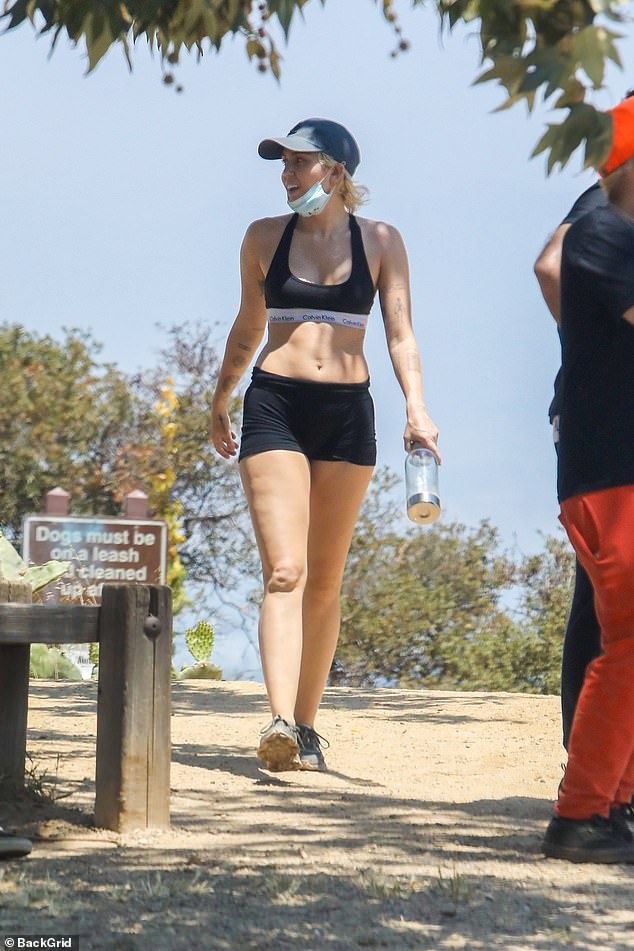 Young people such as Miley Cyrus, pictured, are wasting their time wearing a mask if they place it underneath their chin, according to Dr Ellie Cannon 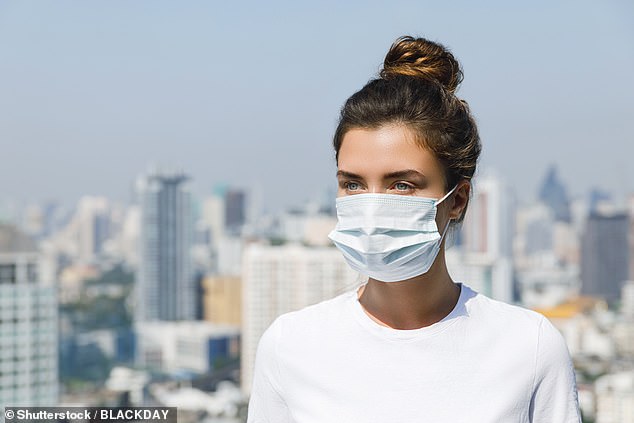 At first, we believed that hand-washing, covering coughs and sneezes, social distancing and self-isolation for those showing symptoms were what was needed to slow the spread of the virus. And this all remains true, even today.

However, since late March, there have been growing calls in the scientific community for face masks, or cloth coverings, to be made part of the mix.

More from Dr Ellie Cannon for The Mail on Sunday…

The reason is simple. We now know that one reason Covid-19 spreads rapidly is because people become highly infectious – expelling large amounts of the virus in tiny droplets of moisture ejected from their mouth and nose – before symptoms begin and they know they have it.

It’s not just coughs and sneezes. Speaking and even breathing is enough to send thousands of these micro-particles out into the air.

And that is where face coverings become vital. They create a physical barrier that blocks the droplets – it’s called source control.

If everyone wore masks, some scientists argued, then it would help further slow the transmission rate of the virus and mean we could all get back to a normal life sooner.

Since writing that piece, I’ve briefed the Mayor of London and been asked by the Government to be the (partially covered) face of a campaign explaining the benefits of masks in places where it’s harder to keep your distance, such as supermarkets or on the bus.

And, as of tomorrow, it will be mandatory to wear a face covering on public transport – not doing so could land you with a fine.

On the whole, I think the public is on board. Patients and friends seem to understand why it’s important, when I discuss it.

But, of course, there are still some people who are resistant to the idea – even quite cross about it all.

It’s just not very British to wear a mask, I suppose. It might feel a bit ostentatious, and many of us don’t like to make a fuss.

It also means a shift in thinking: a mask isn’t worn to protect the wearer, but so you don’t inadvertently infect other people. This is an act of altruism, in a way. But a study published last week suggested that without face coverings worn in public, social distancing will not be enough to stop a second wave of the virus.

I would, however, like to make one point: they need to be worn over the mouth AND nose. I’ve seen a fair few people with their nose popping out of theirs. This defeats the point. 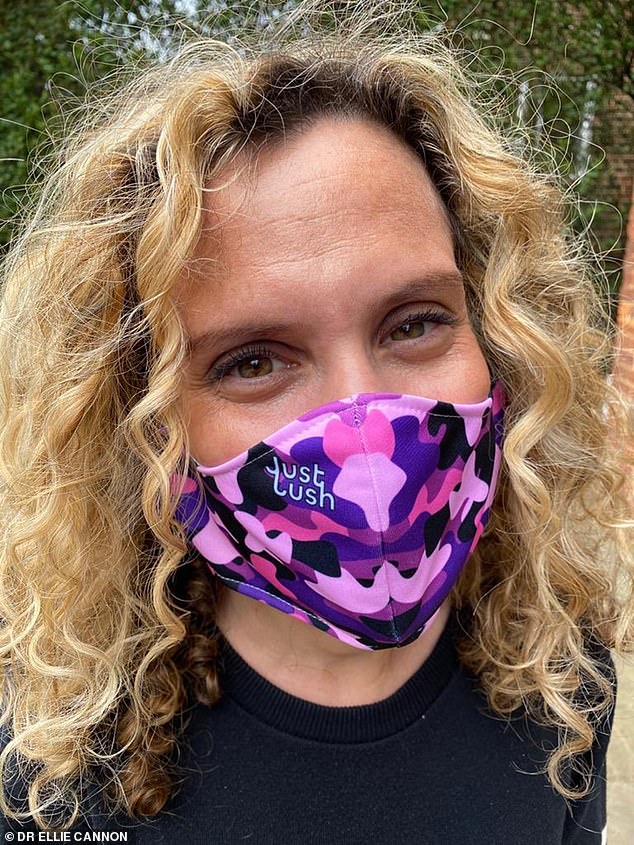 Dr Ellie Cannon, pictured, said there is no point wearing a face mask under the chin

There also seems to be a trend, mostly among younger people, to wear the mask under the chin – I saw a picture of pop-star Miley Cyrus sporting one this way. You might as well not be wearing it.

There are still many scientists who remain unconvinced by masks. The major concern is that face coverings might do more harm than good – that if used incorrectly, and fiddled with, they could become contaminated with the virus and the wearer could essentially catch Covid-19 from the mask itself.

But I disagree. In Asian countries, where wearing masks is common, and in European countries that have ordered the public to wear face coverings since March, we’ve not seen a rise in infections. Quite the opposite, in fact.

With these concerns in mind, people often have questions about how to correctly put on and take off a mask, how often it should be washed and at what temperature.

There’s also much debate over whether you should line a mask with a coffee filter or sanitary pad. My answer is: don’t overthink it.

Professor Trish Greenhalgh, from the University of Oxford, summed it up pretty neatly when she said to think of your mask as a hankie that’s attached to your face. It’s there to stop the moisture that naturally sprays out of the nose and mouth, and that’s it.

Do you have a question for Dr Ellie?

Dr Ellie can only answer in a general context and cannot respond to individual cases, or give personal replies. If you have a health concern, always consult your own GP.

A scarf or an old T-shirt works absolutely fine – medical masks are for healthcare workers and other frontline staff.

Double-layer cloth is better and a paper towel or tissue between the layers can catch the moisture from your nose and mouth and keep the mask dry.

Wash it at the end of the day, or do what I do and carry a few.

When I get into work, while I’m washing my hands with warm water and soap, I wash the mask I wore on my commute. It’s the soap that kills the virus, should there be any on the mask, not the heat.

I hang it on the back of my chair and it’s usually dry by the time I go home.

If you don’t want to make your own, charities are selling lovely ones online.

The main thing is to find something that’s comfortable, so you keep it on. And it really isn’t more complex than that.

Some experts argue that wearing a mask might make some people less likely to wash their hands or stick to social distancing. But I feel the opposite.

My mask reminds me that we’re still in the middle of a global pandemic.

It stops me touching my face and makes me and people around me even more aware of social distancing – people jump out of the way.

In reality, if we don’t all get on board and stop trying to find fault where there is none, we risk missing a golden opportunity to get out of this mess once and for all.

Is there science behind all this? Not a huge amount.

But there wasn’t much science behind lockdown, or social distancing – it was just obvious that it would be effective.

It can take years to gather data on effective public health measures, but in the meantime we can apply common sense. As Prof Greenhalgh explains: ‘Face coverings aren’t 100 per cent effective, but they’re not zero per cent effective either.

‘You can argue about the exact percentages, but overall, if everyone wears a face covering when they’re at close quarters, transmission is going to go down dramatically.’

It’s so easy anyone can do it

Don’t rush online to stockpile masks. You can make your own – just follow these easy steps. Making effective masks is simple, and you will be saving surgical ones for the NHS staff who really need them. All you need for your DIY mask are two elastic bands and a T-shirt that you don’t mind cutting up. Or you can use an old scarf or tea towel. 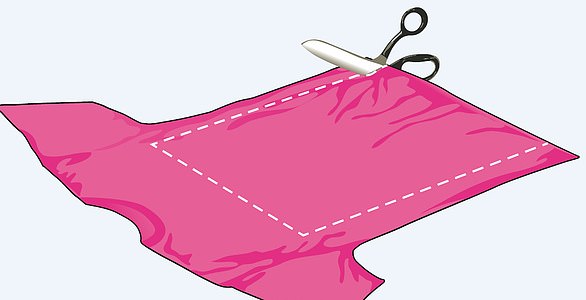 1. Cut up an old T-shirt into a rectangle measuring roughly 40cm by 30cm. Lay it on a table, with one of the shorter sides closest to you 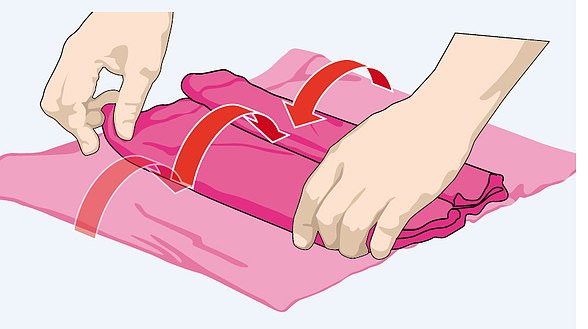 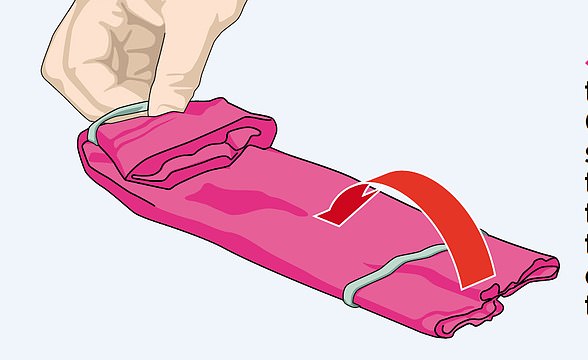 3. Place an elastic band around each end of the fabric, about 3cm in. Choose two bands the same size – you might have to try a few before finding the right fit for you. Fold the ends of the fabric over the elastic bands, so they are facing inwards 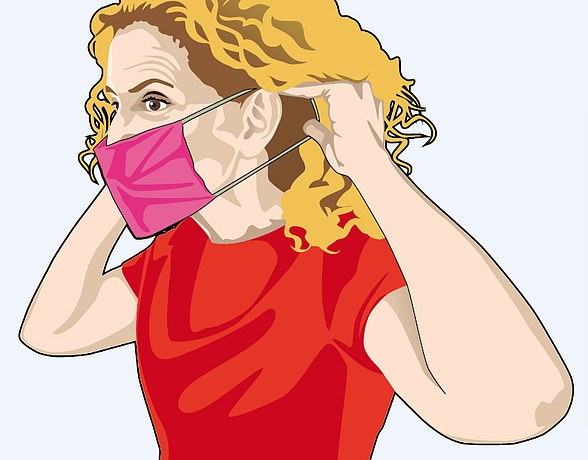 4. To put on the mask, place your fingers through the elastic bands on either side. Raise the mask to your face and hook one band over each ear. It should fit snugly against the sides of your face, over your mouth and nose, with no gaps