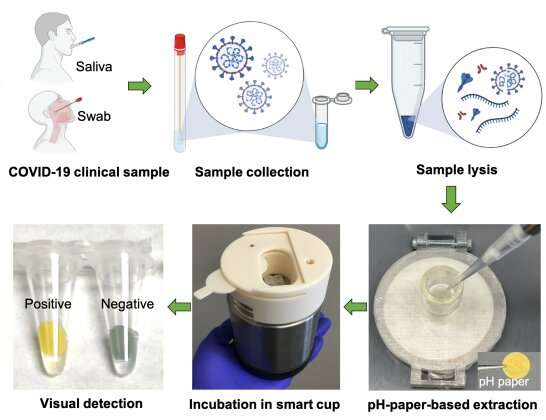 As the demand soars for tests that can rapidly detect COVID-19, with pharmacies and grocery stores around the country selling out of tests as fast as they can be stocked, a UConn researcher aims to make home tests better and more reliable.

Changchun Liu, an associate professor in the Department of Biomedical Engineering who developed a lab-on-paper diagnostic platform and a pH-paper-based extraction and visual detection (termed pH-EVD) device for SARS-CoV-2, the virus that causes COVID-19, is working to make his rapid tests available for at-home use.

The lab-on-paper platform detects two SARS-CoV-2 genes that are highly conserved across variants. So even as the virus mutates, Liu’s test will still be able to detect it. The pH-EVD test provides a simple binary response for patients: positive or not for the SARS-CoV-2 virus.

Liu’s tests work much like a PCR test, which is the gold-standard for SARS-CoV-2 detection and required in many situations, such as before international travel, some surgeries, and more recently, before gaining entry to some sports events.

PCR tests are more reliable than at-home rapid tests, because PCR tests search for the presence of SARS-CoV-2 genetic material, allowing them to pick up on active viral molecules—as does Liu’s test.

Currently available rapid tests check for the presence of antigens against SARS-CoV-2. If an infected person has not generated enough antigens when they take the test, they could get a false negative result. This is a potentially big problem, since someone could unknowingly spread the virus for days before a rapid test will detect the infection. These tests may also give false positive results if they pick up antigens after the infection passes, or from an old infection.

While both Liu’s devices and PCR tests are designed to detect SARS-CoV-2 genetic material, Liu’s devices look more like a rapid test, since it is low-cost, easy-to-use, and much quicker than PCR tests.

Liu’s pH-EVD device has 100 percent specificity, meaning it only detects SARS-CoV-2. This is on par with PCR tests. It also has 89 percent accuracy when it comes to detecting the presence or absence of the virus. Liu published these findings in Advanced NanoBIOMED Research.

“In our lab, we have validated the performance of our technology using COVID-19 clinical samples,” Liu says. “It is comparable to PCR technology.”

Liu’s pH-EVD device includes a cellulose-based pH paper membrane, like many currently available rapid tests. It transports the liquid that contains the sample, obtained from a nasal swab. The pH paper produces color signals to indicate a positive or negative result in 40 minutes, compared to days for PCR results.

Patients would receive laboratory-level test results without having to go to a lab or clinic.

The pH-EVD device does not require any electricity to run, making it much more affordable than PCR tests. Instead, it uses heat generated automatically from chemical reactions to fuel the process. This allows the nucleic acids to amplify at a constant temperature. This amplification is what enables the technology to pick up on the viral genes.

This platform can also be applied for diagnosing other viruses such as HIV, influenza viruses, or high-risk HPV by modifying which genes it selects for.

The lab-on-paper diagnostic platform uses CRISPR technology to detect the SARS-CoV-2 genes. As a diagnostic tool, CRISPR locates the genes of interest and clips them. This clip produces an observable signal, which on Liu’s platform appears as fluorescence filling in on the paper to indicate a positive result. The device also tests for a “housekeeping” gene. This gene will mark the paper to indicate the test was done properly with a high-quality sample.