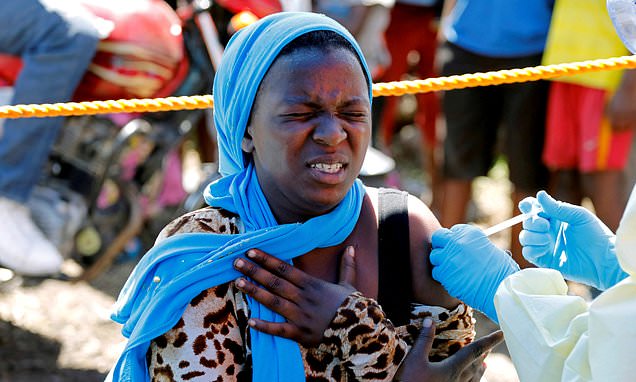 Ebola is back: Democratic Republic of Congo logs second death in fresh outbreak as local health chiefs warn ‘time is not on our side’

Ebola has claimed its second victim in the Democratic Republic of Congo amid a fresh resurgence of the deadly virus.

Local health chiefs are now scrambling to contain the outbreak, which began two weeks ago.

The first case — a 31-year-old man from Mbandaka in the Equater province — died from the killer virus on April 21. His 25-year-old sister-in-law is the second victim of the outbreak.

No-one else has tested positive so far but doctors are monitoring 145 people who came into contact with the two confirmed cases.

Dr Matshidiso Moeti, the World Health Organization’s (WHO) regional director for Africa, said: ‘Time is not on our side.’ 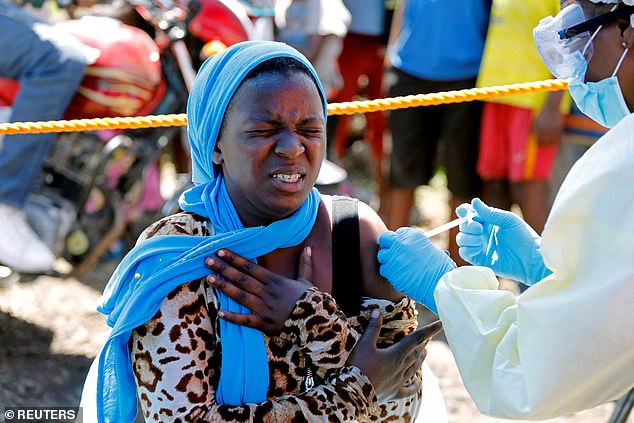 Pictured: A woman is given an Ebola vaccine as part of a trial in Goma, Democratic Republic of Congo, in 2019

Speaking after the first death, Dr Moeti said: ‘The disease has had a two-week head start and we are now playing catch-up.’

Genetic testing showed the 31-year-old man’s infection was a new ‘spillover event’ — transmission from an infected animal, such as bats, porcupines or primates.

It is not linked to any previous outbreaks, according to the DRC’s National Institute of Biomedical Research.

He began showing symptoms on April 5, but did not seek treatment for more than a week. The man had also reportedly been vaccinated against Ebola before.

His sister-in-law began experiencing symptoms 12 days before she died.

Congo has seen 13 previous outbreaks of Ebola, including one in 2018-2020 in the east that killed nearly 2,300 people, the second highest toll recorded in the history of the haemorrhagic fever.

The most recent outbreak ended in December in the east after six deaths.

Mbandaka, the capital of Equateur province, has also contended with two previous outbreaks.

The country’s equatorial forests are a natural reservoir for the Ebola virus, which was discovered near the Ebola River in northern Congo in 1976.

Ebola kills around half of people it infects, and the mortality rate has been as high as 90 percent during some surges.

The virus spreads very easily and can quickly tear through populations. Contact with bodily fluids of a person sick with the virus can quickly cause infection, and the virus can also contaminate surfaces to transmit the virus.

Ebola vaccines and treatments are beginning to become more widely available, and researchers are hopeful it can put an end to this extremely deadly disease.

WHAT IS EBOLA AND HOW DEADLY IS IT?

Ebola, a haemorrhagic fever, killed at least 11,000 across the world after it decimated West Africa and spread rapidly over the space of two years.

That epidemic was officially declared over back in January 2016, when Liberia was announced to be Ebola-free by the WHO.

The country, rocked by back-to-back civil wars that ended in 2003, was hit the hardest by the fever, with 40 per cent of the deaths having occurred there.

Sierra Leone reported the highest number of Ebola cases, with nearly of all those infected having been residents of the nation.

WHERE DID IT BEGIN?

An analysis, published in the New England Journal of Medicine, found the outbreak began in Guinea – which neighbours Liberia and Sierra Leone.

A team of international researchers were able to trace the epidemic back to a two-year-old boy in Meliandou – about 400 miles (650km) from the capital, Conakry.

Emile Ouamouno, known more commonly as Patient Zero, may have contracted the deadly virus by playing with bats in a hollow tree, a study suggested.

HOW MANY PEOPLE WERE STRUCK DOWN?

Figures show nearly 29,000 people were infected from Ebola – meaning the virus killed around 40 per cent of those it struck.

Cases and deaths were also reported in Nigeria, Mali and the US – but on a much smaller scale, with 15 fatalities between the three nations.

Health officials in Guinea reported a mysterious bug in the south-eastern regions of the country before the WHO confirmed it was Ebola.

Ebola was first identified by scientists in 1976, but the most recent outbreak dwarfed all other ones recorded in history, figures show.

HOW DID HUMANS CONTRACT THE VIRUS?

Scientists believe Ebola is most often passed to humans by fruit bats, but antelope, porcupines, gorillas and chimpanzees could also be to blame.

It can be transmitted between humans through blood, secretions and other bodily fluids of people – and surfaces – that have been infected.

IS THERE A TREATMENT?

The WHO warns that there is ‘no proven treatment’ for Ebola – but dozens of drugs and jabs are being tested in case of a similarly devastating outbreak.

Hope exists though, after an experimental vaccine, called rVSV-ZEBOV, protected nearly 6,000 people. The results were published in The Lancet journal.