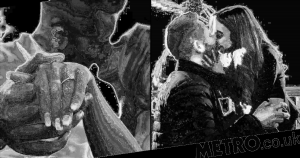 When you have a chronic illness, it can be hard to find someone who understands what you’re going through.

Chloe Meade and Rhys Thomas won’t have that problem. They both have inflammatory bowel disease and met through a support group for their condition.

They quickly struck up a friendship online, but didn’t meet in person until an unplanned encounter in a hospital in Cardiff. They bumped into each other in 2017, when Chloe happened to be having an iron infusion at the same time and in the same place as Rhys was having auto-immune injections.

Two weeks later, they were a couple. Two years later, on 21 September, Rhys proposed on a rooftop while the couple were on a trip to Amsterdam.

The pair say they’re glad to have Crohn’s disease because it brought them together.

Pharmacy assistant dispenser Chloe, from Magor, South Wales, said: ‘Never, ever did I think an inflammatory bowel disease group would lead to me finding my soulmate.

‘I’m grateful everyday to have Crohn’s, it’s brought terrible pain to my life but also brought me the greatest things in life, my fiancé, great friends and strength I never knew I had.’

Translation company director Rhys, from Neath, Swansea, added: ‘Even though Crohn’s has massively impacted our lives, in a way we’re glad that we both have it because it has brought us together.

‘It was a huge coincidence that Chloe and I bumped into each other in the hospital that one time.

‘Chloe was sat in the treatment room and we caught eyes and we started chatting when we realised we were friends on Facebook.

‘With both of us suffering from Crohn’s disease we’ve been able to understand and support each other from the very beginning and it has only made our relationship stronger.

‘We’ve been through a lot over the last few years, in particular with Chloe having life-changing surgery last year, but everything has just come together for us recently – I can’t wait for the wedding.

‘I think meeting on a Facebook group shows that social media isn’t all bad – it’s the best thing that’s happened to both of us.’

Chloe was diagnosed with Crohn’s disease in 2005 at 11 years old and in January 2015, before she met Rhys, she suffered an infected abscess and needed emergency surgery in order to save her life.

She battled an infection in her abdomen just after the operation and needed a drain fitted into her stomach, meaning she was tube fed for three weeks.

Chloe then had nine-hour surgery in July 2018 to remove a section of her large bowel, along with her rectum and gallbladder, and was given a stoma bag.

Rhys was diagnosed with Crohn’s disease in 2008 at 19 years old. He now has the same consultant as Chloe and they are both on the same treatment plan.

The couple became friends on Facebook in 2015 after occasionally chatting about Crohn’s disease and Rhys had asked her for some advice about medication.

They didn’t meet in person until they bumped into each other in hospital. From there they started chatting even more and things became romantic.

One month after that chance meeting, Chloe was at a wedding when she had to be rushed back to hospital. When she was discharged, Rhys picked her up from the hospital and took her home.

When a week later Chloe was readmitted to hospital, Rhys visited her every day. They were a couple by the time she was discharged.

Rhys said: ‘While she was in hospital, I brought her chocolates and chatted to her because I wanted to be there for her.

‘I also took her on our first proper ‘date’ to the KFC near the hospital before she got discharged.’

Two months after becoming official the couple moved in together, and in December 2018 they bought a flat in Cardiff.

Rhys spent months planning the proposal for their holiday to Amsterdam.

Chloe said: ‘The moment Rhys and I got engaged was very surreal, it’s kind of a blur.

‘I heard our song, The Calling’s Wherever You Will Go, play as I walked up the stairs of the roof terrace and thought “it’s happening, he’s actually going to propose!”

‘Of course I said yes instantly, it was just perfect, he’d thought of every last detail to make it perfect for me, I couldn’t have wished for more.’

The couple are now planning for their wedding to take place in June 2021.

Do you have an amazing story of your proposal or how you and your partner met? Get in touch with us at [email protected]