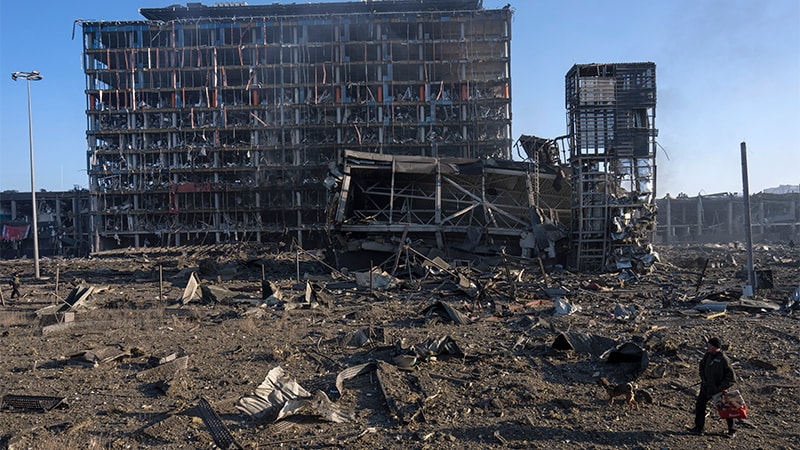 Cancer care is not a top priority for the United Nations agency that is helping Ukrainian refugees across the border into neighboring countries, which makes the role of oncology groups vitally important.

“The triage that’s happening on the border is not focusing on noncommunicable diseases,” he continued. “We know from previous crises that many cancer patients are lost; they simply do not present with their symptoms once they become refugees, and that’s going to become a really big issue.”

Oncology groups are needed to “provide the navigation, the treatment, and also the intelligence to ensure we deliver excellent cancer care where it’s needed for our Ukrainian friends,” he added. Sullivan is a member of the World Health Organization’s Emergency Committee and is director of the Institute of Cancer Policy at King’s College London, UK.

He was speaking at a virtual briefing organized by the American Society of Clinical Oncology (ASCO) and the European Cancer Organisation (ECO), which have joined forces to centralize cancer care efforts.

“Suggestions are that with 4 million refugees, you’re going to be looking at an increase of 13,000 to 16,000 cancer patients per month…. But it will take time for the issue to evolve. At the moment, people are not being overwhelmed … but there’s no doubt cancer care capacity for host countries is going to be an issue in the future.”

So far, about 2 million refugees are in Poland, where cancer centers have experienced a 10% increase in new patients since the war started, said Piotr Rutkowski, MD, PhD, professor of surgical oncology at the Maria Sklodowska-Curie Memorial Cancer Center and Institute of Oncology in Warsaw, Poland.

“Of course, our resources are limited,” he said, adding that efforts are underway to accredit Ukrainian healthcare workers to work in Poland. “It’s unpredictable how the healthcare system in Europe can overcome these difficulties.

“Until now, I don’t think any cancer patients have not received care, so still, we are in a positive situation, but the waiting list can enlarge in the near future,” Rutkowsli commented.

Indeed, the anticipated increase will “likely exceed the possibilities of the Polish health system” soon, warned Jacek Jassem, MD, PhD, professor of clinical oncology and radiotherapy and the head of the Department of Oncology and Radiotherapy at the Medical University of Gdansk, in Poland.

Although there is an EU international agreement for a more widespread allocation of cancer patients, “when they come to Poland, many of them want to be treated in Poland, because they have family here, the language is more familiar.”

Jassem suggests the best way to avoid overwhelming host cancer centers is to triage patients directly from Ukraine. “Some therapies shouldn’t be interrupted. So, for example, radiotherapy started in Ukraine should be continued there, but otherwise, chemotherapy can be continued elsewhere, surgery may be postponed and done elsewhere. These are the decisions that should be considered in Ukraine, and then patients who are selected for particular therapies should be reallocated to other countries,” he suggested.

Romania has seen an influx of about 400,000 refugees, including cancer patients seeking systemic therapy, radiotherapy, or follow-up, said Nicoleta Antone, MD, a medical oncologist at the Cancer Institute of Ion Chiricuta in Cluj-Napoca, Romania. “We have seen patients mainly with breast cancer because most of the refugees [with cancer] are women looking for systemic therapy, but also all the other tumor types, both solid and hematologic tumors.”

Sullivan says attempts by EU member states to address cancer needs are complicated by the fact that many refugees are still on the move. They have been passing through their initial host countries and moving on to Greece, Slovenia, Austria, Germany, Italy, and Turkey, “making the therapeutic geographies at any potential time quite challenging to keep an eye on.” Other countries, such as Moldova, are not part of the EU, “so we dealing with some really quite complex political and financial issues.”

The situation calls for a broader approach to refugees generally, he added. “We’re talking free cancer care for Ukrainian patients, but there’s also, of course, this dialogue of ensuring there’s free care for all refugees. Europe already has a large refugee contingent from other countries, so there’s no doubt this is an opportunity to talk more broadly about cancer care for refugees and also progressive universalism.

In an attempt, ASCO and ECO have joined forces in a special network, noted Julie Gralow, MD, chief medical officer at ASCO.

“The ECO/ASCO Special Network is all about collaboration and coordination across professional societies, across cancer patient groups, across academic and other clinical centers. We’re providing information in the various national languages and trying to amplify the work that each of us is doing…. We’re sharing intelligence, regular reports from the field, information, experience, and most of all, contacts. We’re all being approached individually about people who need help or people who want to help, and we’re trying to bring this all together in a focused way.”

The American Cancer Society also has patient resources on their site, including a 24-hour international call center in multiple languages and a Volunteer Corp of Clinicians, which currently has 123 active volunteers (and another 300 applicants) available to answer questions.

Europe and other countries must consider both a medium and a long-term commitment to refugees with cancer, said Sullivan. “Because even if the war stopped tomorrow, it’s going to take between a year and a year and a half to rebuild cancer care in Ukraine.”

Kate Johnson is a Montreal-based freelance medical journalist who has been writing for more than 30 years about all areas of medicine.