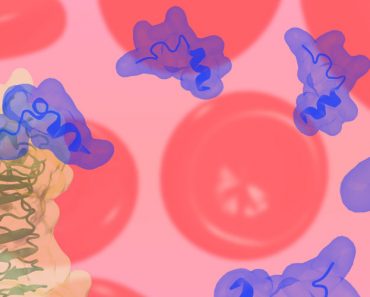 The protein thrombin is vital for ensuring blood coagulates in a wound, but new research suggests small fragments of it, called thrombin-derived C-terminal peptides (TCPs), could also decrease the risk of sepsis in response to bacterial contamination.

In collaboration with researchers in Singapore, Sweden, and Copenhagen, scientists at the A*STAR Bioinformatics Institute have conducted computer modeling and experiments to explore the role played by TCPs, less than 20 amino acids long, that are formed when thrombin is cleaved as part of the blood clotting process.

“Biology is not wasteful, and when this protein is cleaved, the bits have lots of other functions other than just being a bystander in the clotting process,” says Peter Bond, from the A*STAR Bioinformatics Institute.

TCPs are known to bind to lipid molecules found on the surface of bacteria, called lipopolysaccharides. Bacterial lipopolysaccharides are key triggers for the over-active immune response that can lead to the potentially fatal blood infection, sepsis. By forming aggregates with the lipopolysaccharides, the short-chain thrombin peptides effectively mop them up and neutralize them.

However, the mechanism by which they do this is not well understood, and there is evidence to suggest that the TCPs do more than simply get rid of excess bacterial lipopolysaccharides.

In this study, the researchers used a range of techniques, including nuclear magnetic resonance spectroscopy and mass spectrometry, to work out the three-dimensional structure of the HVF18 thrombin peptide and lipopolysaccharide aggregates. With this information, Bond and his team were able to model a TCP and its interactions with lipopolysaccharides to better understand how they bind together and aggregate.

They found that TCPs appear to interact with a receptor called CD14, found on the surface of immune cells. CD14 is known to bind to bacterial lipopolysaccharides in a process that initiates an inflammatory immune response, and potentially also triggers sepsis.

The modeling suggests that TCPs somehow block the functioning of CD14 associated with the bacterial lipopolysaccharides, and therefore help to avoid an extreme immune response.

“That’s the interesting thing about all these peptides; it seems as though nature develops not just one kind of weapon, but a whole range of weapons with lots of different functionalities,” Bond says. “On the one hand, they’re serving to kill the bacteria, on the other hand they’re serving to protect the immune system from over-inflammation.”