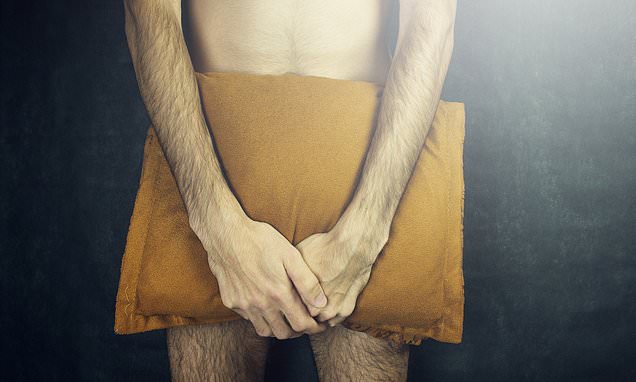 Chinese man, 72, loses part of his penis after leaving metal ring on his member for six months

An elderly Chinese man lost part of his penis after a sexual experiment backfired horribly.

The 72-year-old slipped a 2cm-thick metal ring around the base of his member but it got stuck.

And he left it on his genitals for six months before seeking help, doctors revealed.

He only sought help following a bout of ‘intense pain’ the previous day. 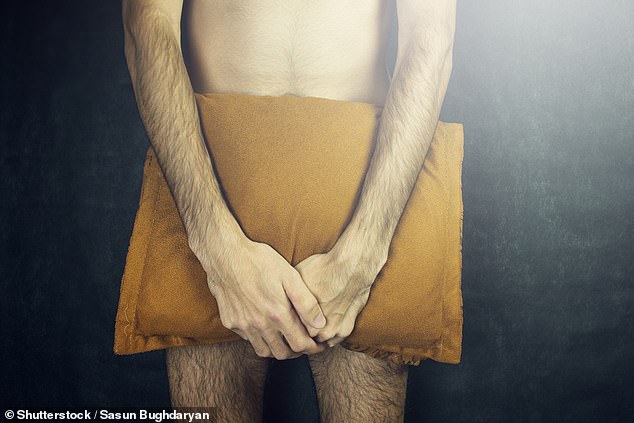 The 72-year-old Chinese man, who wasn’t identified, slipped a 2cm-thick metal ring around the base of his member — but it got stuck

Penile strangulation is a rare but often dangerous medical emergency that occurs when an object or body part blocks the blood supply to the penis.

In the worst cases, the lack of blood flow can result in gangrene and the death of tissue — penile necrosis.

Medics have devised a grading system to indicate the severity of strangulation:

Grade 2: Injury to skin and constriction of corpus spongiosum, but no evidence of urethral injury. Distal penile edema with decreased penile sensation.

Grade 3: Injury to skin and urethra but no urethral fistula. Loss of distal penile sensations.

Grade 5: gangrene, necrosis, or complete amputation of the distal penis.

Detailing the unidentified man’s gruesome incident in the Asian Journal of Surgery, surgeons shared pictures showing how his member was significantly swollen.

Ulcers were also visible on the ‘surrounding skin’.

But he didn’t complain about any difficulties urinating.

They resorted to asking the fire brigade to borrow professional cutting equipment in the form of a heavy wire cutter.

But, again, efforts to remove the ring failed.

Medics eventually got it off using a circular saw — often relied on to cut through metal — and another heavy-duty tool.

Cutting metal creates heat as a by-product, so the man’s penis had to be sprayed with water to keep it cool during the procedure.

But it proved too late to save the entirety of his penis, according to the team at The Third Xiangya Hospital of Central South University.

Dead tissue at the root of the penis, caused by a lack of blood flow, was removed and the wound was stitched up.

Three incisions were also made into the man’s penis to place ‘drainage strip’ across it to relieve the swelling.

Following the operation, the man was given antibiotics.

‘Chronic penile strangulation usually has a better prognosis after removing the incarcerated objects,’ the medics noted.

Following a seven day stay in hospital, the swelling had ‘subsided significantly’, medics said and the man was prescribed further antibiotics.

A follow-up appointment two months later showed that his wound had healed and he could urinate, his doctors said.

Penile strangulation was first logged in medical literature in 1755 and has been rarely documented since, with fewer than 100 official reports.

Penis rings reduce blood flow through the veins, which causes the penis and testicles to swell.

They noted that it is also sometimes performed by people who are mentally ill.

Objects including metal rings and cones, pipes and plastic bottle necks have all been reportedly used penis strangulation cases.

Doctors warned that early treatment and prompt diagnosis is essential when penis rings get stuck to avoid complications because it can cause injury to the blood vessels, which carry blood between organs and the heart.

Penis amputation is required in the most severe cases.

Each case of penis strangulation is managed individually, depending on the patient’s case.