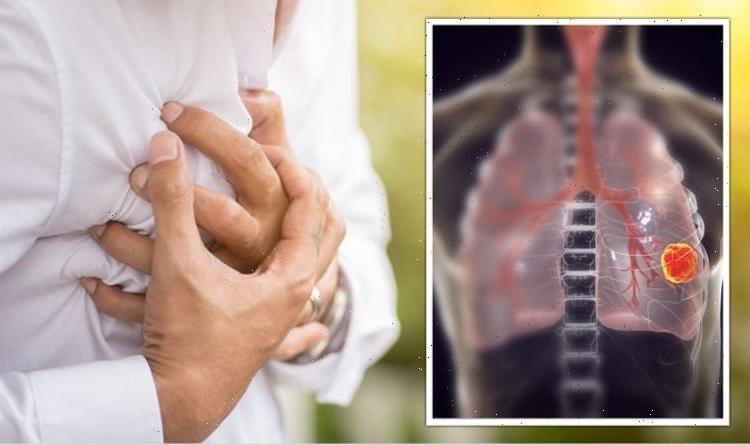 Lung cancer: Signs and symptoms to look out for

The fact that early lung cancer symptoms are difficult to detect means that by the time most people are diagnosed, the tumour has already spread to other organs. Lung cancer can start developing in the windpipe, the main airway or the lungs. It develops when there is uncontrolled growth of abnormal cells inside one of both lungs. More than eight out of 10 cases of lung cancer in the UK are caused by smoking.

The stage of a cancer refers to its size and how far it has spread. Doctors look at the size of the tumours, whether it is in the lymph nodes and whether it has spread to another part of the body.

A small cancer that is just in the lung is likely to be an early stage cancer, whereas one that has spread into the surrounding tissue or to another part of the body is an advanced cancer.

Around 45 out of 100 people diagnosed with lung cancer in the UK are aged 75 and older.

Many people show no signs or symptoms at the early stages of the cancer development. Here are some symptoms of lung cancer you can expect:

While lung cancer is not the most common cause of a chronic cough, it is a possibility.

About half of people diagnosed with lung cancer have a persistent cough.

A cough associated with a cold of a respiratory infection will go away in a week or so, but a persistent cough that lingers can be a symptom of lung cancer.

A chronic cough can last for up to eight weeks.

Lung cancer may produce pain in the chest, shoulders, or back.

When a lung tumour causes tightness in the chest or presses on nerves, you may feel pain in your chest, especially when breathing deeply, coughing or laughing.

Chest pain is usually a sign that a tumour has spread to the lining of the lung or other parts of the body near the lungs.

It’s advised to see a doctor if you notice any type of chest pain, whether it’s sharp, dull, constant or intermittent.

The pain can occur at any time and disrupt sleep at night.

A distressing symptom of lung cancer is shortness of breath, also called dyspnea, which causes difficulty catching breath or a feeling of tightness in the chest.

Sometimes lung tumours grow in a way that blocks airways, puts pressure on lungs or causes inflammation in the respiratory system.

This can prevent the respiratory system from working properly and cause problems getting air in.

Lonny Yarmus, a pulmonologist in the Lung Cancer Program at the Johns Hopkins Kimmel Cancer Centre, said: “shortness of breath is a common symptom, but the good news is that it can be managed quite well.”

Some people with lung cancer lose weight despite eating normally. This is called cachexia.

The body sometimes doesn’t absorb all the fat, protein and carbohydrates from food, and can burn up calories faster than usual.

Advanced cancer is associated with inflammation and the release of cytokines, proteins that regulate inflammation, that may produce a loss of appetite and weight loss.

Tumours high in the chest can also push on the oesophagus, making it hard to swallow and difficult to eat.