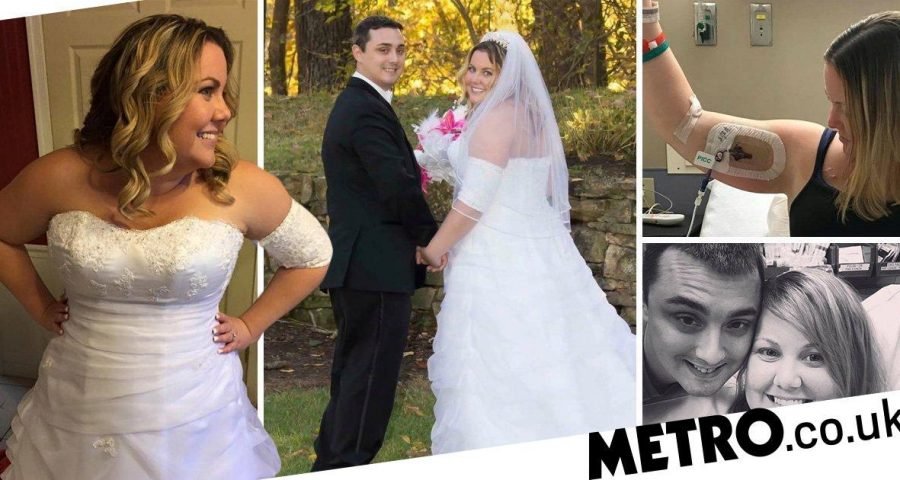 ‘I married the right man.’

On Ashley’s big day medication had made her body so swollen that it took four people to squeeze her into her wedding dress and she was forced to remove her shoes at the altar.

She said: ‘I was determined to get married.

‘I was going to get that dress on and marry the man I loved, no matter what.’

Warning signs had appeared just one week before the wedding, when Ashley began noticing blood in her urine.

‘I thought it was just stress, I had 150 guests coming to my wedding,’ she said.

‘My priority was looking pretty…but my husband-to-be insisted I went to hospital.’

Blood tests and an MRI scan revealed a 6.5cm tumor on her left kidney.

There was also an abscess on the kidney which was infecting Ashley’s bloodstream.

She said: ‘I couldn’t stop thinking: “Ok, but I’m getting married, this is supposed to be a happy time”.’

Ashley’s parents, Kim, 55, and Barry Heil, 53, advised her to put the wedding on hold, but the bride-to-be would not hear of it.

She said: ‘I thought the show must go on.’

Doctors placed a peripherally inserted central catheter (PICC) in Ashley’s arm. The long IV drip delivered antibiotics into the vein of Ashley’s heart and her bloodstream.

She continued: ‘I accepted I was going to have this in my arm for my wedding.

‘We got a little backpack to put the IV pump into.

‘Doctors gave me pain medicine so I could go to my wedding for the day.’

Ashley’s best friend, Abby, 28, made an arm band to hide the IV drip from sight.

She said: ‘She cut the underside of my dress and made a band around my arm so the PICC line looked like it was part of my dress.

‘It covered it, so that it didn’t look ugly.’

On the morning of her wedding Ashley took nausea medicine and left hospital, making her way to The Meadows, her wedding venue in Hellertown, Pennsylvania.

She says she was worried about fitting into her wedding dress because she was ‘very puffy’.

Ashley explained: ‘I did fit into the dress but it took four people to squish me into it.

‘I couldn’t breathe much.

‘I still wanted to have a normal wedding and I didn’t want anything to change because I was sick.

‘As soon as I was at the altar, I had to take my shoes off as my feet were so puffy.

‘My fingers were so swollen that we kept the rings on because we were worried about getting them off and on otherwise.’

Ashley has no regrets about going ahead with her wedding.

She said: ‘It was beautiful.

‘Sure, I could have rescheduled it, but I didn’t want to.

‘The theme was Tiffany and Company.

At the reception, Ashley mingled with guests eating pulled chicken, barbecue sandwiches, mashed potato and corn-on-the-cob, but dashed off every now and again to administer nausea medicine.

She said: ‘I had to inject it into the IV.

‘I wanted to try my wedding cake and I knew it would make me sick otherwise.’

The bride left the wedding party at 10.30pm and the next day, in October 2015, she returned to hospital.

‘Luckily Ben and I went on our honeymoon, a cruise around the Caribbean, three months earlier,’ she said.

‘When I was admitted to hospital Ben lay next to me for 53 days straight.

‘He slept on a little chair or on a bed that he had made on the floor.’

After being released from hospital, Ashley and Ben moved in with Ashley’s parents.

‘Most newlyweds don’t move in with their parents but I was so sick that I needed help,’ said Ashley, who is still recovering from the disease.

‘Whatever happens next, I won’t let cancer hold me back.’

MORE: Bride kicks war veteran out of wedding for wearing military uniform and ‘showing off’

MORE: Wedding guests give bride and groom £160 gift – then ask for it back three months later