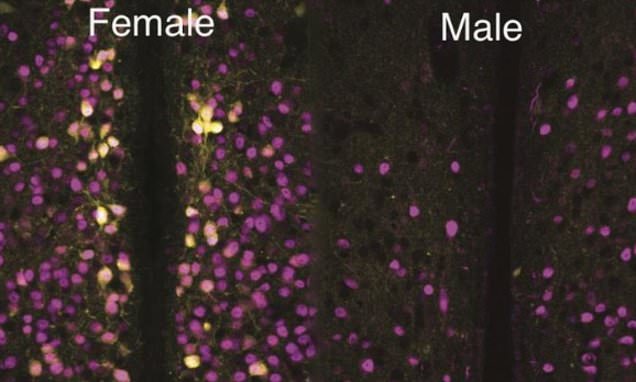 Women really DO have a ‘mother’s instinct’: Study on female mice reveals their brain cells are activated when exposed to the ‘love hormone’ that helps parents bond with their child

Scientists may have discovered physical proof that women really do have a ‘mother’s instinct’.

A study found a group of brain cells in female mice became activated when they were exposed to the ‘love hormone’ oxytocin.

However, the same was not true for their male counterparts, said the researchers at Louisiana State University.

These cells are found in the area of the brain that is thought to regulate maternal behaviour.

Oxytocin is released during childbirth and breastfeeding, and has been shown to play a role in mother-baby bonding. 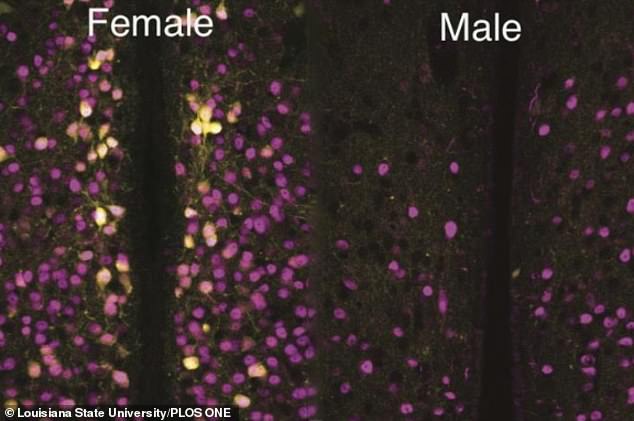 Mice were exposed to the ‘love hormone’ oxytocin, which plays a role in mother-baby bonding. This activated cells in the part of the brain that is thought to regulate maternal behaviour. However, the effect was much stronger in the female mice (left) than the males (right)

The researchers claim their study could apply to ‘all mammals that exhibit maternal behaviour, including humans’.

Down the road, this could help treat postnatal depression, which affects up to one in seven women and is associated with low oxytocin levels.

‘Many researchers have attempted to investigate the difference between the oxytocin system in females versus males,’ lead author Dr Ryoichi Teruyama said.

‘But no one has successfully found conclusive evidence until now. Our discovery was a big surprise.’

The study – published in the journal PLOS ONE – had the scientists exposing mice brain cells to oxytocin.

The researchers then marked the exact location of thousands of the hormone’s receptors, which took more than a month.

This revealed the oxytocin receptors in these cells were only activated when the ‘female hormone’ oestrogen was present.

They hope their findings will open the door to postnatal depression treatments that target oxytocin-receptor cells.

‘I think our discovery could be universal to all mammals that exhibit maternal behavior, including humans,’ Dr Teruyama said.

Postnatal depression affect more than one in 10 women within a year of giving birth, NHS statistics show.

And in the US, up to one in seven new mothers suffer, according to the American Psychological Association.

As well as making women feel sad and exhausted, many also struggle to bond with their baby and may even have disturbing thoughts where they imagine hurting their newborn.

Even if a woman overcomes the disorder, it can have a lasting effect on her child’s development.

Studies have shown children of depressed mothers are at risk of cognitive, emotional, behavioural and medical problems.

In recent years, oxytocin has been suggested as a treatment for everything from mental-health conditions to autism spectrum disorders.

WHAT IS POSTNATAL DEPRESSION?

Postnatal depression is a form of the mental-health condition that affects more than one in 10 women in the UK and US within a year of giving birth.

As many men can be affected as women, research suggests.

Many parents feel down, teary and anxious within the first two weeks of having a child, which is often called the ‘baby blues’.

But if symptoms start later or last longer, they may be suffering from postnatal depression.

Postnatal depression is just as serious as others form of the mental-health disorder.

Sufferers should not wait for their symptoms to just go away.

Instead they should recognise that it is not their fault they are depressed and it does not make them a bad parent.

If you or your partner may be suffering, talk to your GP or health visitor.

Treatments can include self-help, such as talking to loved ones, resting when you can and making time to do things you enjoy. Therapy may also be prescribed.

In severe cases where other options have not helped, antidepressants may be recommended. Doctors will prescribe ones that are safe to take while breastfeeding.

Postnatal depression’s cause is unclear, however, it is more common in those with a history of mental-health problems.

Lack of support from loved ones, a poor relationship with the partner and a life-changing event, such as bereavement, can also raise the risk.