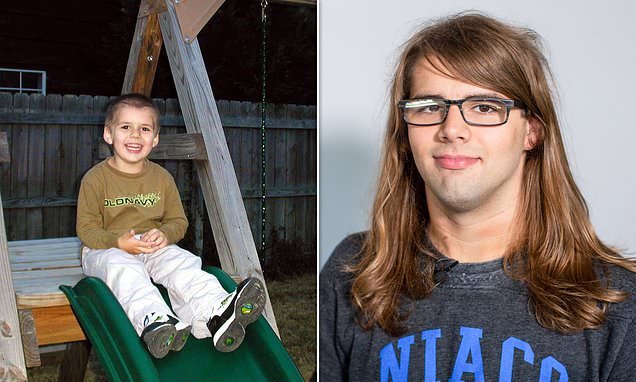 Boy, 17, ‘with one of the most extreme cases of Tourette’s in the world’ says his tics are beginning to ease with the help of deep brain stimulation

A 17-year-old with an extreme cases of Tourette’s has undergone ground-breaking treatment to help him combat his tics.

Trevor Smith, from Iowa, was diagnosed with the condition when he was just eight years old, with mild tics in his hands, neck and around his eyes.

Doctors said he had one of the worst cases of Tourette’s they had ever seen, as his tics caused uncontrollable twists and jerks in his body.

No available treatments worked, and Trevor was only able to find brief respite when music playing, which was thought to distract his brain.

His only hope was deep brain stimulation, a procedure which involves implanting electrodes in the brain and sending signals through the body.

Finally, after having the surgery paid for by the Mayo Clinic, Trevor has seen his symptoms ease and noticed an improvement in his condition.

Trevor, who is studying to become an engineer, is one of very few to be granted the surgery that is usually performed on people living with Parkinson’s. 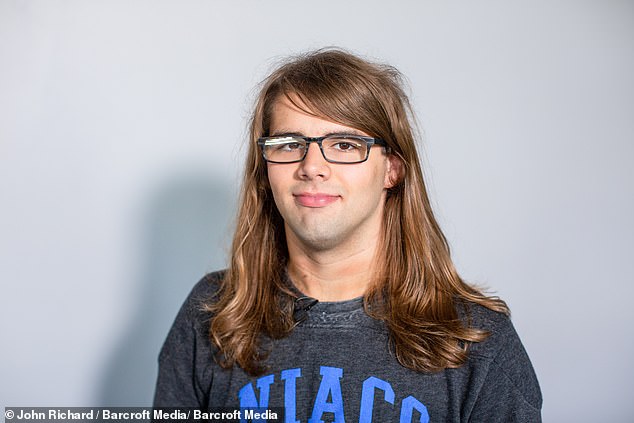 Trevor Smith, 17, from Iowa, pictured recently, has one of the worst cases of Tourette’s in the world according to his doctors. But with the help of ground-breaking treatment, his constant tics are beginning to ease 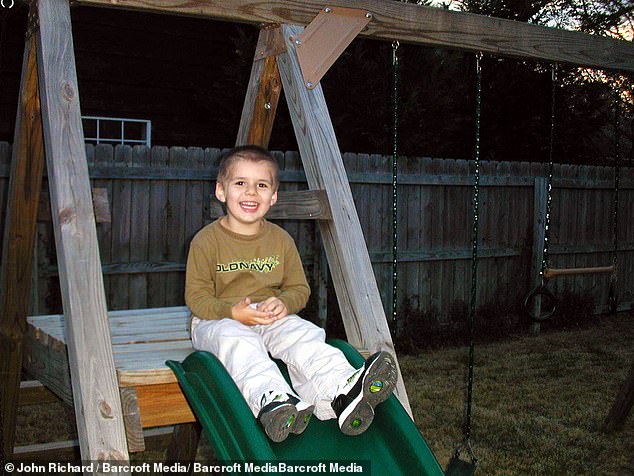 Trevor was diagnosed when he was just eight years old, with doctors identifying mild tics in his hands, neck and around his eyes (pictured as a young child)

Trevor said: ‘I’ve noticed the tics have been reduced a little and that gives me a lot of hope that we’ve got the right spot.

‘It’s always taken a big chunk of time and energy just having this condition. It’s something that’s always on my mind.’

In terms of medical treatment up to now, Trevor has struggled to get any benefit.

Over the last few years, playing video games, guitar and piano have helped to occupy Trevor’s mind and decrease his tics slightly.

Trevor was approved to receive deep brain stimulation (DBS) by the entire Board of Neurology and Neuromodulation at the Mayo Clinic in December of 2016.

WHAT IS DEEP BRAIN STIMULATION?

Deep brain stimulation (DBS) helps to control movement problems and is the main type of surgery used to treat Parkinson’s.

It involves implanting very fine wires with electrodes at their tips into the brain.

These are connected to extensions under the skin behind the ear and down the neck, which then connect to a pulse generator.

When the device is turned on, electrodes deliver high-frequency stimulation to the targeted area, which changes signals in the brain that cause Parkinson’s symptoms.

The brain is not destroyed in the process.

It does not stop Parkinson’s progressing and is not a cure.

But insurance companies in the US refused to cover the $200,000 (£152,800) cost of the ground-breaking surgery – which is not FDA approved for Tourette’s – that was offered.

But the Mayo Clinic helped to cover the majority of the cost, meaning he was able to have the operation after two years of trying to fundraise some of the money.

Deep brain stimulation (DBS) involves implanting very fine wires with electrodes at their tips into the brain. These are connected to extensions under the skin behind the ear and down the neck, which then connect to a pulse generator.

This allows electrical impulses to be sent to the brain, regulating abnormal communications that are seen in people with Tourette’s.

The NHS in the UK does not routinely offer the surgery, as watchdogs state there is not enough evidence currently to support its success.

Trevor, who is already seeing improvements from his device, said: ‘It’s definitely interesting and something different, having something put inside your brain.

‘I have a remote to control the device in my brain. So the next step from now is to wait and make sure I get used to the voltage and slowly I can begin to up this until it gets to the point where I think it’s good.

‘Looking to the future, I’m just going to go with the flow. I try not to plan a month ahead.

‘But with this surgery, maybe I can start to do that.’

Treatments were unable to control Trevor’s tics. Pictured as a child with his mother, Melissa Smith 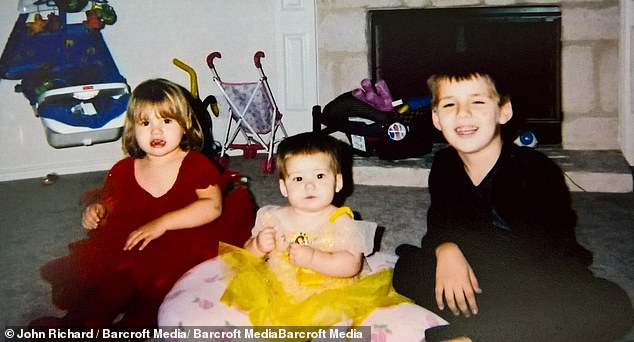 Trevor, pictured as a child at home with his two sisters, Chloe and Savannah, said at any given time he would rate his tics as a seven or eight on a scale of one to ten 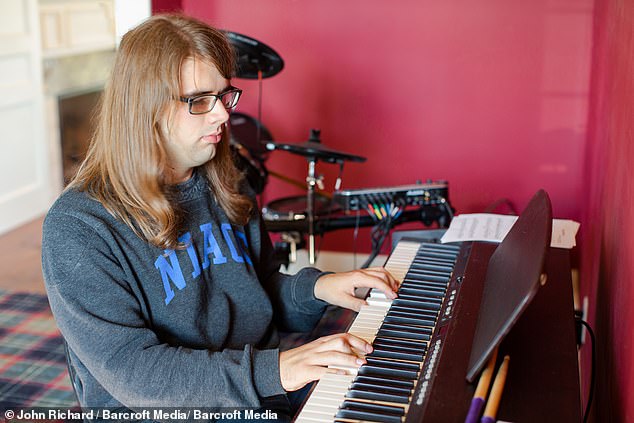 Trevor was only able to find brief respite when he plays guitar and piano, with the distraction helping to reduce his tics. Pictured recently at home

Trevor’s tics began to progress quickly after his first diagnosis, to the point where he would have multiple parts of his body jerking at the same time.

Melissa Smith, Trevor’s mother, was also diagnosed with Tourette’s as a young girl, but lives with a milder version as her tics started to go away when she was in her teenage years.

She said: ‘Every single doctor that we have seen has said Trevor has the most severe case they’ve ever seen.’

According to TV station KIMT, Trevor was told by the Mayo Clinic he has one of the worst cases of Tourette’s they have ever seen.

He said: ‘On a scale of one to ten, I think it’s about a seven or eight at any given time.’

In addition to his violent tics, Trevor was having to overcome the bullying in school.

He said: ‘Tourette’s presents a lot of challenges, but I try to overcome them as they come along. It’s hard and it takes a toll on you.

‘There are a lot of negative things associated with Tourette’s. A lot of people steer clear of me because of my tics. They see it and think it’s not normal.

‘I will say I haven’t had many friends in my life. I was the most bullied person.’

Mrs Smith added: ‘The bullying for Trevor actually evolved over the years.

‘In the beginning, it was a lot of staring. We then put him in school and the bullying and teasing started to get more sophisticated with people ganging up on him.’ 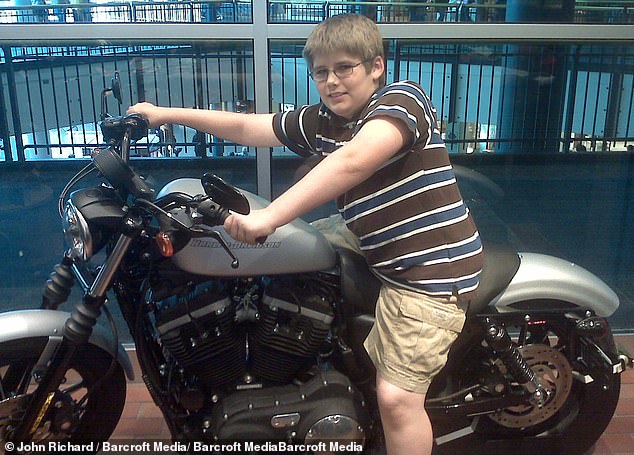 Through his teenage years (pictured), Trevor’s tics developed in uncontrollable twists and jerks in his body, leading to doctor’s telling him they hadn’t seen a case like it 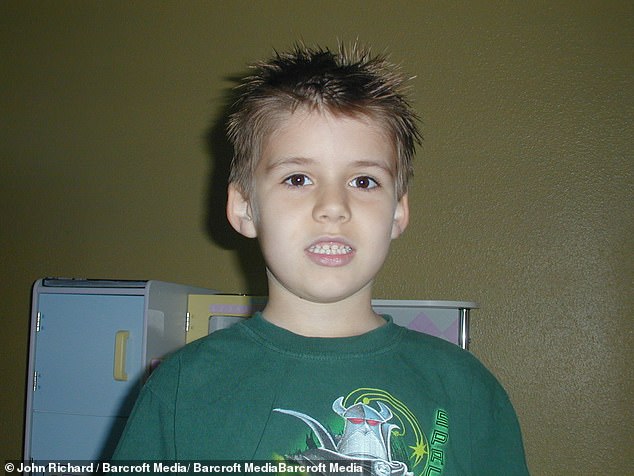 Trevor’s mother, Mrs Smith, said the bullying against Trevor in school gradually grew from staring to children ganging up on him. Pictured as an older child 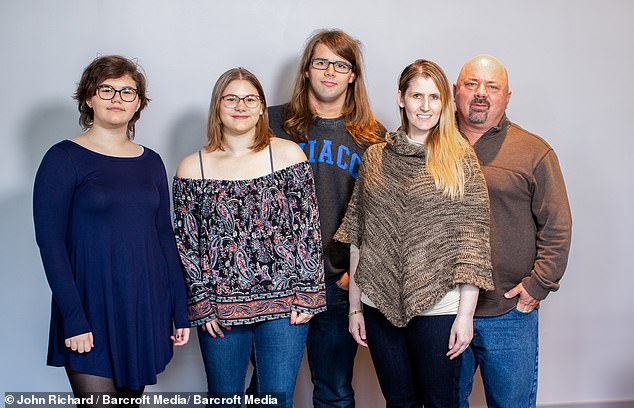 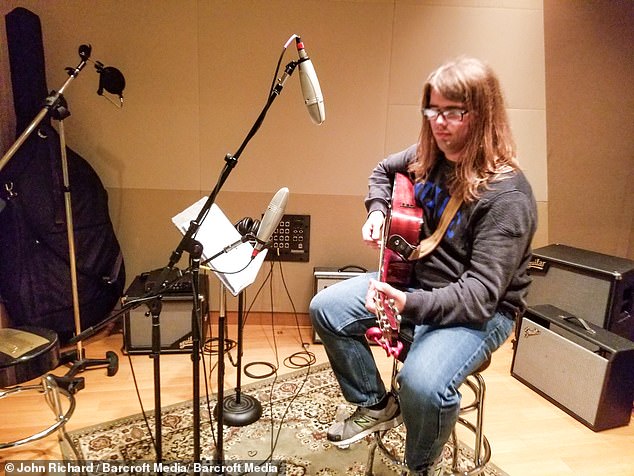 Thanks to the Mayo Clinic who helped to cover the majority of the cost, Trevor was able to have the operation which involves implanting an electrode into his brain

Trevor’s father, Christopher Smith, said: ‘It hit us pretty hard. We realised what the rest of the world saw.’

Trevor has always had a close family to offer support at the most difficult of times, with his 15-year-old sister, Olivia Smith, always trying to protect her brother.

She said: ‘I find it frustrating to see people staring at him. You see people look at him and then talk to their friends and you know they are talking about him.

‘I think it’s because, mainly, people don’t understand. They are very judgmental and it’s always hard to watch.

‘We have developed a look for when people stare now. We don’t ever say anything, but we give them the death stare.’

Fortunately, Trevor has found it much easier making friends in his college life at North Iowa Area Community College where he studies chemistry.

He said: ‘I’m currently a freshman in college which is going great. I am hoping to become an engineer. I am definitely thinking mechanical.

He has also started a non-profit to advocate for Tourette’s sufferers and to educate organisations to be Tourette’s aware.

For more information on Trevor’s progress, visit his Facebook page.