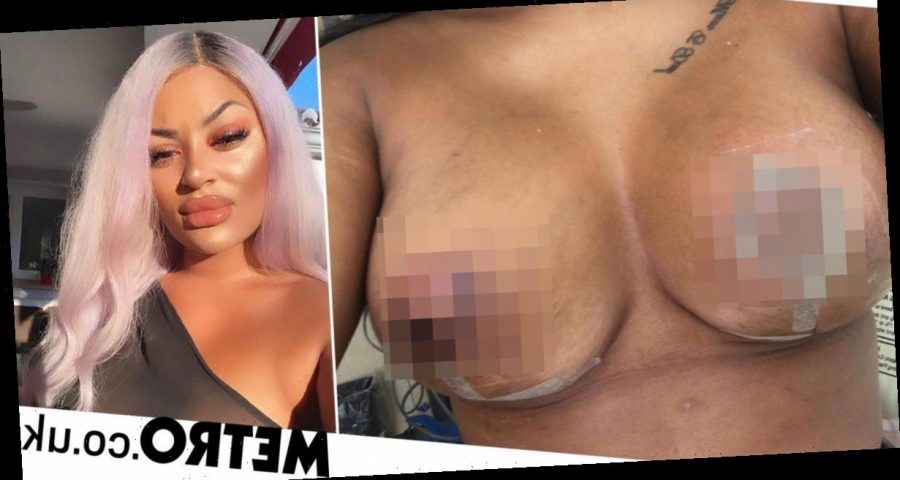 A woman has been left with a hole in her breast when her nipple fell off after she went under the knife in Turkey.

Beautician Cherrise Massay opted for breast augmentation surgery in Istanbul after friends of hers recommended the clinic, which cannot be named for legal reasons.

The mum-of-two claimed her nipple fell off after the procedure and she ended up having to go to A&E when she got back to the UK, where she was diagnosed with necrosis – which is the death of cells in living tissue.

Cherrise, 23, paid £5,500 for a breast uplift and augmentation and a Brazilian butt lift (BBL) but woke from the eight-hour surgery to find that her bum had been filled with breast implants.

Cherrise said this was just the start of her ‘living nightmare’ as she required three blood transfusions and emergency surgery to remove the implants after being told her body was rejecting them.

She said: ‘I researched the clinic and saw amazing results as four friends had been there.

‘Everything seemed legit and I couldn’t wait to get rid of my saggy boobs after breast feeding.

‘Initially, I wanted a fatty lump removed from my bottom as I had a BBL in February in Miami.

‘But after my consultation, I agreed to have implants as it sounded better – however I did not think it would be breast implants!

‘I woke up from the surgery and I didn’t feel well. I knew something was wrong. I begged the nurses, who couldn’t speak English, to help me as I couldn’t even lift up my head.

‘It took two days of complaining for them to realise – something isn’t right.’

Cherrise, who hails from Salford, was rushed down to intensive care for three blood transfusions and told her body was rejecting the implants in her bum and they were removed.

She said: ‘I instantly felt better when I woke up from surgery.

‘I was shocked when I saw the implants they put in – they were different sizes and for breasts!

‘My breasts looks good but swollen which is normal, however my one nipple kept on bleeding.

‘They kept putting small plaster-like strips over it to mask the bleeding and the fact it was rising.

‘But I was told the bleeding was normal.’

Cherrise got back to the UK a week later and immediately went to A&E, where ‘doctors were horrified’ by what had been done to her.

She was diagnosed with necrosis but told the bleeding was a good sign as it meant the breast tissue wasn’t totally dead.

She said: ‘I had to go every other day to get the bandages changed and it went from bad to worse.

‘My nipple was purple in Turkey and I was told it was bruising, but after a couple of weeks, it was jet black.

‘Two weeks after the surgery, I noticed my nipple was lifting despite being on strong antibiotics to try and stop the infection.

‘Four days later on September 21, my nipple completely came off.

‘I fell to the floor as I saw it peel off with the bandages. I am completely mortified.’

The beautician has been left with a ‘gaping’ hole in her breast and she said there is a ‘horrific’ smell.

Close to tears, Cherrise said: ‘I feel like I’m in a horror film – I can’t even get away with it.

‘It stinks like a dead body because it is rotting flesh.

‘I can’t forget about it because it is burning and my whole breast is in pain.

‘I am at risk of contracting sepsis and the clinic in Turkey don’t even care – they have blocked me!’

She says doctors believe an artery may have been caught when the implant was put in, and they may have to take the implant out, which she’s happy to do ‘if necessary’

Cherrise added: ‘I regret going to Turkey, I wish I had just kept my saggy boobs.

‘I am going to need a skin graft on my nipple in the future which will leave me with more scars.

‘It is too late for me and I have a long road to recover but I hope my story will stop other women from going abroad for surgery.

‘The surgeons I visited don’t care about you, they just want your money – I have learnt the hard way.

‘I wouldn’t wish any of this on my worst enemy – it is truly horrendous.’ 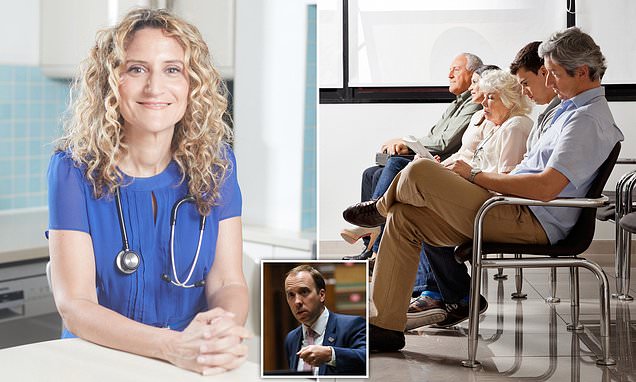