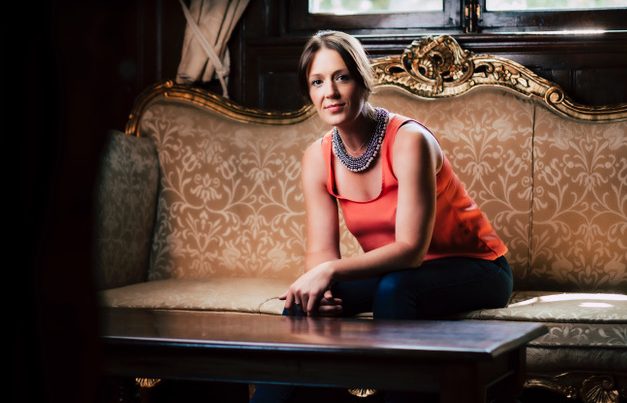 There’s no good way to brace yourself for the news that you have a rare cancer, but I certainly never expected to receive a call telling me while I was in my garden one afternoon.

It started with migraines. I never even used to have headaches, but suddenly I was having pain so severe that I had to be rushed into A&E. It was September 2019, and the start of months of my health deteriorating for reasons that no-one could explain.

Without warning, I was fatigued and losing my balance. I’d been a yoga teacher and a health practitioner for years. My body was my tool and I knew it really well, so I could tell that something was seriously wrong.

I was at the back of a yoga class struggling while using blocks, straps, and all kinds of aids I’d never needed before. I’d go into a plank and want to lift my leg up for a new move, but my body just wasn’t listening to my brain.

After one visit to A&E, I was told to see a doctor first thing the next morning. I did, and I had a very invasive examination, testing all the nerves in my hands, legs and arms. They sent me back to A&E because they thought I had a compressed disc in my lower back – but that wasn’t the case.

No-one could tell me what was wrong. I had MRI scans, blood tests; I was tested for Lyme disease, spine tumours, MS – it was horrific.

All the while, my body was getting worse. I was losing the ability to walk and to hold things.

There was a glimmer of hope in March 2020, when I was diagnosed with an autoimmune disease. It was the start of the pandemic, so in an attempt to help me before the hospital beds started filling up, the medical team gave me a blood plasma treatment immediately.

For a while, it seemed to be working – until, six weeks later, it stopped and my symptoms continued to get worse. I’d already lost feeling in my legs, but it felt as if my arms were about to follow. I was exhausted.

Then in May, I got a phone call from the hospital, telling me that they needed to book an appointment with me over the phone. I remember sitting in the sunshine in my back garden, thinking, ‘What’s going on now?’

And then, they told me: I’d been diagnosed with POEMS Syndrome, a rare form of myeloma cancer.

The only word I heard was ‘cancer’. I immediately went into fight mode.

But at that point, I wasn’t able to walk or open a packet of crisps. I was in a state. When I was waiting to see the team, I was petrified – I just couldn’t believe this was happening to me.

At the hospital, I was told I’d have to go on home chemotherapy. Normally, they’d have taken me straight in for a stem cell transplant. But because of Covid, they had to get the disease under control at the same time as managing the pandemic.

So, my chemo started from home, around four weeks after that call.

It’s hard to fully explain what your mind and body are going through, in a time when you’re fighting to stay alive in the midst of a global crisis. The ground felt like it was crumbling beneath me.

Plus, there were some people in my life who couldn’t bring themselves to see me in that vulnerable state. My partner left me, one month after my diagnosis. I was living in shared accommodation with housemates. It’s a time when I needed my support network, but a large part of that fell away.

I’ve always prided myself on being very independent and able to look after myself, but I’d got to the point where I was feeling really vulnerable and in need of help and support from others. The dynamics of relationships really change when you get diagnosed with cancer.

Luckily, through organisations such as Macmillan Cancer Support, I was introduced to people who were going through what I was: the fear for the future, the late-night vomit sessions, the feeling of craving a big bacon sandwich when all the natural health books tell you to reach for an apple.

They were complete strangers that really helped, and are now amazing friends.

After a few months, I got news in October 2020 that the home chemo wasn’t working, and the ratio of myeloma in my system was rising. I had to have a stem cell treatment as soon as possible.

Thankfully, I was able to have it just three days before the second lockdown began, otherwise it would have been delayed even longer.

The week leading up to the treatment meant daily self-injections in preparation. By the time that day arrived, I was grateful but it felt like I’d gone rounds with Mike Tyson. Everything was hurting.

Recovery for this procedure is estimated at about four to six weeks, but I knew I needed to be out of the hospital sooner than that. I willed myself better – I knew that I had to really visualise myself feeling better to actually get home.

And, to the doctors’ surprise, it worked. I was out of the hospital in two and a half weeks. I was regaining strength in my legs and looking well enough to take care of myself.

In January 2021, I was told that the myeloma was non-quantifiable, and by June it had gone completely.

Physically, it’s still a struggle. I used to be someone adventurous, who would kite surf, mountain bike and kayak. Now, spending a day out of the house means I’ll be fully tired for the next day.

I used to dream of having a family, and now I’ve been told that I can’t have children, due to the chemotherapy. Frankly, my whole life’s fallen apart to ground zero. I’ve had to lean on my own skills as a life coach to get me through, as well as the inspirational stories of others.

Now, I’m repurposing my life. Because I can’t be physical like I used to, I’ve had to figure out how to use my creative energy in another way: I’ve started singing and going to acting school.

I don’t know if I would have made it through what’s undoubtedly been the hardest time of my life without the community I’ve found, and the support they’ve given me.

Navigating a new future with new expectations isn’t easy, but by sharing my story in places like Macmillan’s Talking Cancer podcast, I’d like to think I’m doing my part in letting people know that they’re not alone.