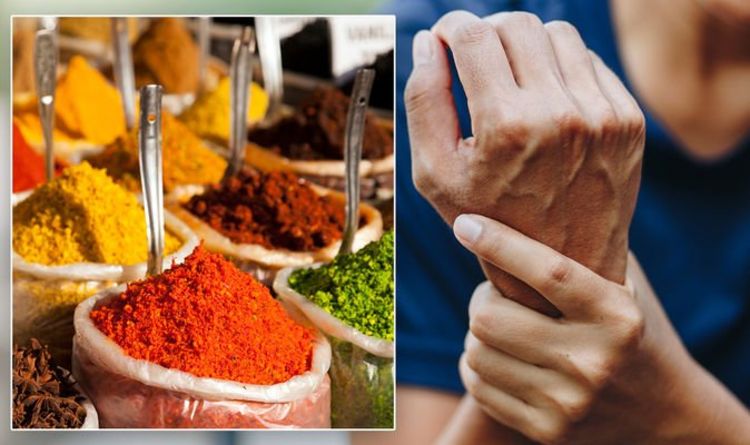 Arthritis is an incredibly common condition in the UK, affecting more than 10 million people. If you’ve been diagnosed with arthritis, you could benefit from making just a few changes to your everyday diet plan – including adding certain spices to your dinner preparations.

Eating certain foods and spices can help to relieve joint pain linked to arthritis, according to the Arthritis Foundation.

Anti-inflammatory foods are an ideal addition to your diet, because arthritis pain is largely linked to inflammation.

Joints and other parts of the body can become inflamed, and certain spices block the inflammation from ever developing.

But which spices should you consider adding to your dinner plans?

Turmeric is one of the best spices for arthritis patients, the charity claimed.

Its active ingredient, curcumin, is responsible for its pain-relieving benefits.

“Several human trials have shown an anti-inflammatory benefit, which can translate to reduced joint pain and swelling.”

Cayenne and other dried chilies are usually used to add a kick of heat to dinner foods.

But, it could also help to relieve some of your arthritis pain, it’s been claimed.

You can choose to sprinkle some cayenne over your food, or simply opt for a cayenne sauce or marinade.

Cinnamon is usually added to sweet foods for a festive taste, but it might have an even greater purpose for some arthritis patients.

You can add more cinnamon to your diet along with other spices for a major anti-inflammatory combination effect.

The Arthritis Foundation said: “Cinnamon contains cinnamaldehyde and cinnamic acid, both of which have antioxidant properties that help inhibit cell damage caused by free radicals.

“However, studies say more research is needed to make formal recommendations about its use.”

Ginger is one of the best spices for arthritis patients, seeing as it’s a natural anti-inflammatory.

Scientists have also revealed ginger could relieve osteoarthritis symptoms in some patients.

If you’d rather not add ginger to your dinner, you could try having a daily ginger tea instead.

But, it’s best to use it in its fresh form, so try combining a couple of ginger roots with boiling water for the greatest effects.