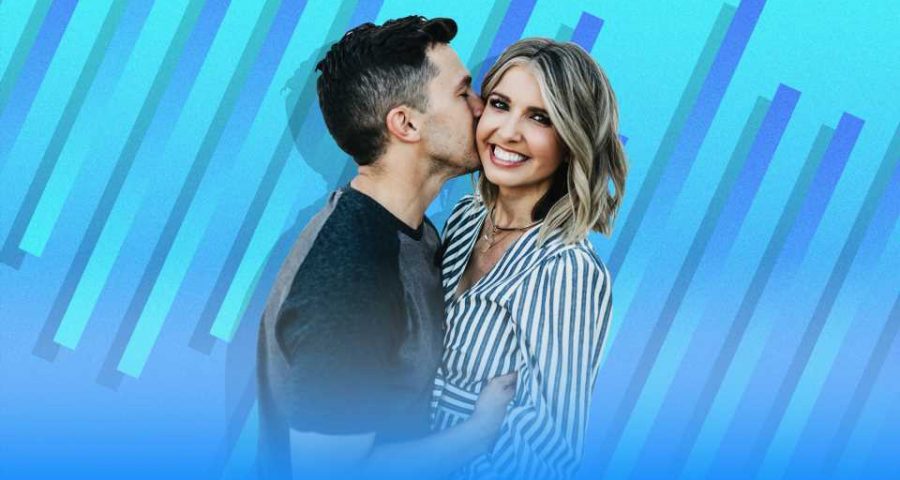 Becoming a parent isn’t always an easy or straight path, as many moms and dads know. That’s especially true for Aly Taylor and her husband, Josh, two of the stars of TLC’s show Rattled, which follows four couples and their experiences of new parenthood. Off the screen, Aly and Josh are sharing their full story in their new book Aly’s Fight: Rattled By Life But Firm in Faith (Hachette, May 2019, explaining how they fought Aly’s breast cancer together, then infertility, and how they came to be a family of five.

Aly and Josh had been married for five years when they decided to start trying to have children. Aly researched early signs of pregnancy and when she read that one was breast soreness, she checked if she had the symptom and found a lump in her breast. She had it checked out and learned she had very aggressive stage 3 breast cancer at the age of 24, so she couldn’t delay treatment. “I didn’t have time to preserve my fertility, and as a woman who really hoped I would be a mom, I was devastated there wouldn’t be time because my cancer treatment started in two weeks,” Aly said. “We were scared and worried, but Josh said, ‘Ali you have to be here for us to preserve your life, not your fertility.’ We prayed and believed my womb would be protected.” Aly went through 16 rounds of chemo, followed by double mastectomy and 30 radiation treatments.

Even though the doctors told Aly she had less than a 20% chance, and had a high likelihood of it recurring in the first five years, years later she learned she was finally cancer-free. Aly and Josh tried to have kids again, but a fertility specialist told them all of Aly’s eggs were damaged because of the cancer treatment and in the off chance they did get pregnant, she would likely have a miscarriage. “We didn’t know where to go from there — when you deal with infertility, you never think it’s going to be you. We thought about egg donation, because our doctor said you can carry a baby, you just can’t make one.”

During this time, Aly and Josh leaned on one another for support. “I let Aly know she wasn’t by herself,” Josh says. “It’s not that Aly is not getting pregnant, it’s Josh and Aly haven’t gotten pregnant yet. We have to be careful we don’t put it all on women.” Aly adds, “Josh did a great with that, joining me in the happy moments and the sad moments. You have to get back on the hope train. We went through years of that and Josh would ride the waves with me instead of trying to act like everything is okay. Get in the muck with your partner and always be helpful and believe it will happen and don’t prepare for the worst.” 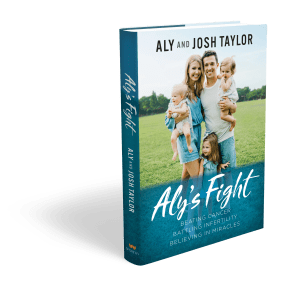 Aly and Josh decided to go the adoption route and found a baby. But right after the birth the family decided they wanted to keep her. They packed up their bags to leave the hospital, but at the last minute the birth mom changed her mind and gave them a daughter, Genevieve, in March 2015. “When people said something good will come of cancer, it’s true,” Aly says. “We always went through it together, so even though I had cancer I feel Josh had it too, in a different way. We realized we would have never had Genevieve had I not gone through cancer. We really didn’t know if we would be parents again. We went through so much to have her and were so happy.”

Nine months after they brought Genevieve home, Aly had an infection in her arm, lymphedema, which is a common side effect of breast cancer surgeries. She chalked up the flu-like symptoms and feeling under the weather to the infection. But Aly learned she was actually pregnant. They expected it to be a high risk pregnancy, but all of her bloodwork, ultrasounds and tests revealed that the baby girl was completely healthy, despite that the fertility doctors had told them it would be impossible. “For a long time it didn’t feel real because I had accepted that I wouldn’t have a baby biologically and given up dream of carrying a baby,” Ali says. “I was so in love with adoption after we had Genevieve; I could not imagine loving a child more. I was ecstatic; once you’re carrying miracle baby it’s hard to put into words.”

When Aly was one month pregnant, Genevieve’s birth mother reached out to them to tell them she was pregnant again with a little girl and asked if they would be her parents. With their due dates only two weeks apart, Aly and Josh decided they would leave their home in West Monroe, Louisiana and temporarily live in Kentucky, near the birth mom, so they could be present for the birth. Aly gave birth to Vera on August 14, 2015 and 11 days later Lydia was born. Once again, the birth mom had second thoughts about keeping the baby, but at the final moment told them they could be her parents.

In just 16 months, Aly and Josh had three daughters. “It’s just indescribable,” Aly says. “We try to be mentors to people going through infertility and the adoption process. It’s been so hard but so rewarding. I know people love their kids as much as we do, but when you fight so hard to have your kids, there’s just an extra sense of gratefulness when you know how close you were to them not being here. We really strive to encourage people to keep trying for biological kids, but if you can’t get pregnant, that doesn’t mean you weren’t meant to be parents — there is a way.”